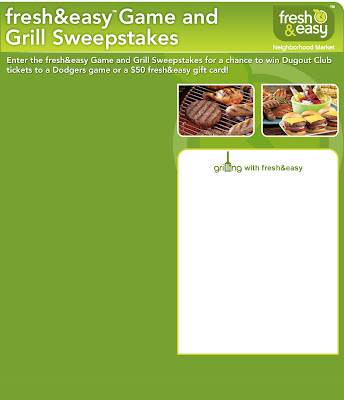 Shoppers can enter the sweepstakes portion of the promotion [click here] for a chance to win four Dugout Club-level tickets to a Dodgers game. Those are excellent seats, by the way.

In addition, the winner gets all the free food they can eat while watching the game, according to Tesco's Fresh & Easy. Based on the quantity of food and drink some fans put away while watching a Dodgers game, that could be a big bill for the grocer.

The second, third and fourth place winners in the sweepstakes each also get a prize: A $50 Fresh & Easy Neighborhood Market Gift Card.

Here's how Fresh & Easy Neighborhood Market positions the promotion and sweepstakes, which is featured on the Los Angeles Dodgers' team website:

"Tasty grilled food and exciting baseball. It's a classic summertime combination and it's why fresh&easy and the Los Angeles Dodgers have teamed up for an incredible sweepstakes. After all, what could be better than enjoying delicious food while watching the game from some of the best seats in the park? Just enter the sweepstakes below and you could win tickets to the Dugout Club and all the food you can eat while you're there! fresh&easy has low prices on everything you need for grilling all season long. From their Grill Pack to a wide selection of snacks and drinks, they make game day grilling simple. Find your nearest store at freshandeasy.com."

Along with the sweepstakes, Fresh & Easy is featuring a number of its fresh & easy store brand fresh meat, side dish and beverage items at special prices on the Dodgers' website as part of the promotion. We give Tesco's Fresh & Easy bonus points for including the tie-in, something we regularly preach grocers should do. You can view the items here.

Partnering with the Dodgers on the grilling season promotion and sweepstakes is a good idea for Fresh & Easy Neighborhood Market, in our analysis and opinion: It gives the grocer a strong third-party endorsement from a popular Southern California institution - the Dodgers; ties the grocery chain in with America's pastime - baseball (not a bad idea for a British grocer); and comes at a good time - the official start of summer grilling season. Americans grill about five times more than average from Memorial Day until the end of August, for example.

The promotion with the Dodgers also comes shortly after Fresh & Easy's introduction of a new line of eight value-added fresh meat grill packs. Read our recent story - May 16, 2010: Two Grocers, Fresh & Easy and Raley's Offer Two Very Different Approaches to Ready-to-Grill Fresh Meat Merchandising. The Dodgers' promotion is good timing as a way to hang a lantern on the introduction of the new grill pack items.

Fresh & Easy Neighborhood Market also is kicking off a series of free store-level grilling events featuring Bigmista's Barbeque, which is owned and operated by the husband-and-wife team of Neil and Phyllis Strawder. The new grill pack items will be featured at the in-store grilling events.

The first 'Bigmista' grilling event is tomorrow (June 4) from 5 -to- 7 p.m at the Fresh & Easy store at 4211 Eagle Rock Blvd in Los Angeles, California. In addition to free grilling tips - and free bbq - from grill master Neil Strawder, Fresh & Easy is giving out free reusable canvas shopping bags to the first 150 customers in attendance at the store in Los Angeles' Glassell Park neighborhood.

Fresh & Easy Buzz has suggested for a couple years now that Tesco's Fresh & Easy Neighborhood Market needs to do these types of promotions, which tie in store-level merchandising activity with third party promotional partnerships, on a regular, organized basis. We haven't seen much of it until just recently though.

But in a positive sign this promotion comes right on the heels of an in-store and weekly advertising flyer promotional tie-in Fresh & Easy just finished in partnership with the consumer packaged goods company Unilever and the non-profit organization Operation Homefront, which serves as a lifeline for America's wounded warriors and their families. Read our May 11, 2010 piece - May 11, 2010: Fresh & Easy Neighborhood Market Promotion Benefits America's Wounded Warriors. (The grocer ended up extending the promotion to June 1 so that it would overlap Memorial Day, by the way.)

As a result, perhaps Tesco's Fresh & Easy has seen the logic of our suggestion. The reason such promotions can and generally are powerful is not only do they create extensive awareness for a grocer - if promoted properly - but they also partner the grocer with a third party - such as Operation Homefront and the Dodgers in these two examples - which allows a retailer to leverage the good will and other positive attributes of the third parties onto its brand image.

Additionally, such promotions are good because they extend a grocer out into its community and the larger world - the world where customers and potential customers live. Doing so humanizes a grocer, makes it a stronger part of the community, and ties it in to where we all live and breath.

Such promotions must be regular though, not just sporadic. They need to part of a comprehensive, overall promotional merchandising strategy that's part of and tied-in to a grocery chain's marketing strategy.

New grocers on the block like Fresh & Easy Neighborhood Market need to create excitement regardless of the size of their parent company. Tesco may be the third or fourth largest retailer in the world but in California, Nevada and Arizona Fresh & Easy is just another grocer; and a young one at that.

Creating excitement through old fashion promotional merchandising like the Los Angeles Dodgers and in-store grilling event tie-in promotion is one way Fresh & Easy can create real excitement around its brand and stores - the type of excitement that sells groceries, not just grabs headlines.
Posted by Fresh & Easy Buzz at 6:57 PM