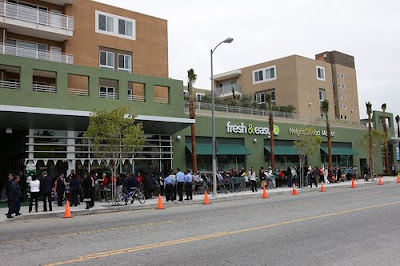 South Los Angeles, like many lower-income neighborhoods in the United States, is underserved by grocery stores that offer a decent selection of fresh foods and groceries at affordable prices. Such neighborhoods are referred to as food deserts.

The opening of the Fresh & Easy market today, along with the opening of a store just a couple blocks away by local chain Superior Grocers, will greatly improve the access of food for neighborhood residents.

Added water for a food desert

A long line of shoppers and the mere curious were outside the new South Los Angeles Fresh & Easy store early this morning, waiting for the key to be turned in the lock to open the new market.

Los Angeles city councilwoman Jan Perry, who's district the store is located in, attended the grand opening this morning and was a featured speaker.

Councilwoman Perry, along with Los Angeles Mayor Antonio Villaraigosa, has for many years led the efforts to get more grocery stores and other food-oriented venues to open in underserved South Los Angeles.

For example, Councilwomen Perry was instrumental in Superior Grocers' locating its new, full-service supermarket in the neighborhood last year.

Tesco's Fresh & Easy has 88 of its current 145 stores located in Southern California. The other 57 stores are in Southern Nevada and Metropolitan Phoenix, Arizona.

Councilwoman Perry was the driving force behind the Central & Adams mixed-use development, which the Fresh & Easy store is the retail anchor for. There are 80 affordable-priced apartments located above the ground-floor grocery market.

At this morning's grand opening, Councilwoman Perry said: "Fresh & Easy is bringing quality fruits, vegetables, meat, and wholesome foods to an area in great need of grocery outlets and food options. I am excited to see this new urban model here in South Los Angeles. I am proud that we can count them as a new investor in our neighborhood."

Mayor Villaraigosa is attending the annual U.S. Conference of Mayors in Washington D.C. But Los Angeles Deputy Mayor Austin Buetner was there with Councilwoman Perry.

As part of the store's grand opening this morning, Tesco's Fresh & Easy gave a $1,000 donation to L.A. Works, a local organization that encourages volunteerism.

Getting from a half to a full loaf

Fresh & Easy Buzz congratulates Tesco's Fresh & Easy for opening the store in the underserved South Los Angeles neighborhood. We also believe its good business for Fresh & Easy to do so. Contrary to what's passed as conventional wisdom, which is changing, among many in the food retailing industry, locating stores in underserved, food desert neighborhoods can pay off in sales dollars.

In this piece yesterday - Food Deserts & WIC Vouchers: Half A Loaf For the New Fresh & Easy Store Opening Tomorrow in South Los Angeles - we wrote that Tesco's opening of the Central & Adams neighborhood Fresh & Easy market is a positive effort in the move towards increasing the food shopping choices of residents of underserved communities. And it is.

However, the thesis of our piece is that doing so only provides "half a loaf" in Fresh & Easy's case.

That's because Tesco's Fresh & Easy Neighborhood Market does not accept WIC Vouchers as a matter of company policy, despite the fact that nearly 100% of its competitors in Southern California do.

As such, this is the "half a loaf," as we detail in yesterday's piece linked above.

For example, the Superior Grocers supermarket just a couple blocks away from the Central & Adams Fresh & Easy store accepts WIC Vouchers, as do all of its 33 stores.

As the grand opening, Mary Kasper, Fresh & Easy Neighborhood Market's vice president & general counsel said: "We're opening stores in all types of neighborhoods because we fundamentally believe everyone – regardless of where they live – deserves access to quality, fresh food at affordable prices. We're also proud to bring more quality jobs to the neighborhood, particularly in this economy. We had hundreds of applicants attend our job fair at the local YMCA last month and we have worked hard to hire right from the neighborhood."

Ms. Kasper has worked hard with Councilwomen Perry and her staff in getting the Central & Adams Fresh & Easy store open in South Los Angeles. We think the goal and policy she stated this morning is a positive and laudable one.

However, we suggest the paragraph below as a natural corollary to the policy Ms. Kasper articulated in her statement today, and as such should be implemented by the grocery chain:

In addition to opening stores in all types of neighborhoods because of the fundamental belief that everyone - regardless of where they live - deserves access to quality, fresh food at affordable prices (something we agree completely with), wouldn't it also make sense to offer the many mothers, children and infants that receive WIC Vouchers in South Los Angeles and all of Southern California, along with in Nevada and Arizona, the opportunity to purchase fresh, healthy and nutritious foods using those vouchers at Fresh & Easy's 145 fresh foods and grocery stores, which is something they are unable to do at present?

Policy consistency - as well as positive corporate-community relations and plain old good business sense (added sales for accepting the WIC Vouchers) - suggests to us it would make not only good - but logical - sense to do so.

Fresh and Easy with ten store openings in February seem to be really on the move again.You mentioned a few months ago that they wanted to nearly double the size of their distribution centre in Riverside have they got the go ahead and why do they want the exra space? also when will they enter Northern California and could they supply Tucson from Riverside.Do you think they should buy a supermarket chain in usa and which one. Your excellent comments would be wellcome.

Thanks for your comment Roger. That's a tall order of questions; if we answer them fully we won't have anything to write about in the Blog. Kiding of course.

In brief, Tesco's Fresh & Easy has applied to the relevant governmental agencies in Riverside County to expand its DC there. Our take is that expanding isn't really needed at present based on the current volume the 145 Fresh & Easy stores are doing. Rather, it's likely Tesco is doing so from a strategic stance: so that when it wants to expand the DC the permit process, ect. will already be completed. Tesco went through numerous problems initially with the process for the DC. They probably want to avoid a repeat.

Based on our analysis, Fresh & Easy should be able to supply Tuscon from Riverside. The only limiting factor we can see is that Federal DOT regulations limit the number of hours a truck driver can be on the road for a steady period of time without laying over and sleeping before resuming driving. Believe it is 8 hours. A way to solve this, which isn't uncommon in the industry, is to use a team of drivers when delivering to more distant locations. Drive-sleep-drive-sleep.

We will reserve judgement as to whether or not Tesco should buy a supermarket chain in the U.S.

Do you think they should acquire one? If so - which one?