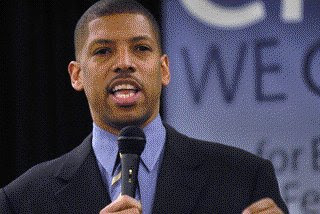 Tesco's Fresh & Easy Neighborhood Market continues to affect local politics in Sacramento, California even though the grocer has yet to open its first store in the city.

Sacramento's new mayor, city native, former NBA basketball all-star and now retired Sacramento developer Kevin Johnson, was supposed to be sworn-in as the city's new mayor at yesterday afternoon city council meeting. However, at the last minute there was a change of plans because of an item on the council's agenda that it was determined posed a conflict of interest for the new mayor.

That item was a proposal that the city of Sacramento redevelopment agency allocate $2.2 million dollars to a Tesco Fresh & Easy store development project in North Sacramento, according to a story in the Sacramento Bee newspaper.

As Fresh & Easy Buzz reported in this piece, now Sacramento Mayor Kevin Johnson's Kynship Development Company recently sold a vacant land parcel in the city's Oak Park neighborhood (a separate project from the North Sacramento one mentioned above) for $1.12 million to Tesco's Fresh & Easy for a new store the grocery chain plans to build and open in the neighborhood -- the very neighborhood Kevin Johnson was raised in and where he operates the St. HOPE Academy non-profit community development foundation which he founded when he returned to Sacramento after retiring from the NBA a few years ago. Johnson has severed his ties with the foundation now that he is the city's mayor.

It was the fact Mayor Johnson's company sold this Oak Park neighborhood parcel to Tesco's Fresh & Easy that caused City Attorney Eileen Teichert to determine there would be a conflict of interest if Mayor Johnson was sworn in at the start of the Tuesday afternoon city council meeting, thereby being present to hear and vote on the $2.2 million dollar proposed city contribution to the North Sacramento Fresh & Easy project.

Therefore, instead of being sworn in as Sacramento's new mayor during the afternoon meeting as planned, instead Kevin Johnson was sworn-in at 6pm that evening, avoiding any conflict of interest regarding the Fresh & Easy proposal.

We checked with the Sacramento City Clerk's office. Johnson was sworn-in last night and presided over the city council's evening session as mayor. The spokesperson told us at press time no decision has yet been made about giving the North Sacramento Fresh & Easy project the $2.2 million in redevelopment money.

There could be a problem going forward with Mayor Johnson's voting on any development or other issues involving federal dollars to Sacramento. That's because following a federal probe earlier this year into how Johnson's St. HOPE Academy used federal funding, the mayor-elect and St. HOPE were placed on a list of entities that can't do business with the federal government.

City Attorney Eileen Teichert says however mayor Johnson will not be precluded from voting on issues involving federal funding. But there does seem to be some confusion over this since she told the Sacramento Bee that 'she did not know how Johnson's presence on the list would affect the city, but that she was confident that it "won't affect the city's ability to accept funding." She said the only other issue is "how much disclosure we have to do to whatever federal agency we're applying for funds."'

Since Johnson is no longer in charge of St. HOPE academy though it appears he should be able to vote on such matters. However, according to the City Attorney its likely he will recuse himself from voting on any matters, including the $2.2 million redevelopment grant, involving Tesco's Fresh & Easy Neighborhood Market.

Tesco has confirmed plans to open 19 of its small-format, convenience-oriented Fresh & Easy combination grocery and fresh foods markets in the Sacramento/Vacaville Metropolitan region, including a number of units in the city of Sacramento, as Fresh & Easy Buzz previously has reported and written about frequently.

Meanwhile, as we reported previously, the Oak Park Neighborhood Association, which is comprised of a group of residents who live in the neighborhood, recently won a number of concessions from Fresh & Easy regarding the design of the proposed Oak Park store. At an October hearing before the City of Sacramento Design Review Board, the members of the board agreed, after hearing a presentation from Dustin Littrell of the Oak Park Neighborhood Association, to write those changes into the final approval of the Oak Park Fresh & Easy.

Tesco agreed with the board's decision, even though it went all the way to the hearing wanting to keep the store's design the way it was, and went ahead and in partnership with the sites developer bought the vacant Oak park parcel for the $1.6 million from now Sacramento mayor Kevin Johnson's Kynship Development Company.

What will be interesting to see now that so much has transpired regarding Fresh & Easy and Sacramento's new mayor, who beat the city's incumbent mayor Heather Fargo by a wide margin in the November election, is if the Oak Park Fresh & Easy market will end up getting built, and if so, when.

Meanwhile, after being sworn-in as Mayor of Sacramento the sometimes controversial but very popular Kevin Johnson has already hit the ground running, which isn't surprising since he was famous in the NBA for his hard-running style on and off the basketball court. The new mayor already has named the key members of his leadership team, along with announcing what he calls an open and transparent government initiative, in which he pledged to make the city's business and his own business interests open to the public.

Mayor Johnson also has said he plans to be a major player in California regional public policy issues and politics. California elects a new Governor in 2010. Could Kevin Johnson possibly be thinking about a run? As Mayor of Sacramento he already is just down the street from the state capital after all.

Johnson was the change candidate in the November election for Sacramento voters, winning a mandate to do just that -- change how the city is run from what the incumbent Heather Fargo was doing. We expect him to shake things up in the capital city. It should be interesting, as should Fresh & Easy's future in Sacramento.

>April 29, 2008: Tesco's Fresh & Easy an Issue in Sacramento, California Mayor's Race A Year Before its First Store in the Capital City Even Opens

>February 8, 2008: Read this February 8, 2008 piece from the blog Natural~Specialty Foods Memo about one of Fresh & Easy's stores which will go in the low-income Oak Park neighborhood in Sacramento.