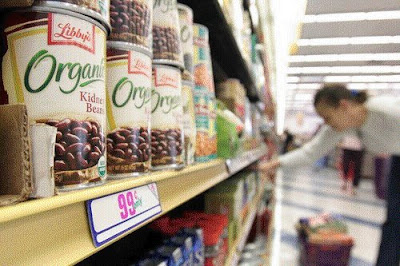 If it's Sunday, it's "Meet the Press." But it's likely that the coffee viewers were drinking while watching the news program early Sunday morning was a basic brand brewed at home rather than a Mocha Latte from Starbucks.

NBC's "Meet the Press," America's Sunday morning news program of record, where U.S. Presidential candidates (and President-elect Barack Obama who appeared last week), foreign leaders and sometimes heads of major U.S. corporations go to address the leading political, social and economic issues of the day, featured a round table discussion yesterday on the news show which had outgoing Wal-Mart Stores, Inc. president and CEO Lee Scott as a member.

Scott recently retired from his CEO position at Wal-Mart and will be replaced at the end of January, 2009 by head of global operations Mike Duke. Scott will remain with the U.S.-based global mega-retailer in an advisory capacity for a couple years.

The Wal-Mart CEO said on the program yesterday that the retailer is seeing major changes in the ways its customers are behaving in the current, serious economic recession.

"The number one concern among consumers today is their job, plain and simple," Scott said yesterday on "Meet the Press."

He offered this example and analysis from Wal-Mart USA's pharmacy group: "In our pharmacy group, we have increases in prescription drugs, but not at the same rate it was," he said. "What we're seeing is an increase in self-treatment."

Scott also said customers are changing the types of foods they buy at Wal-Mart.

"We're seeing an increase in food storage as people are cooking more at home," he said. They are "using leftovers more extensively," and buying more frozen food.

Scott also said on "Meet the Press" yesterday that small businesses, which comprise a significant segment of Wal-Mart shoppers, particularly at the chain's Sam's Club wholesale stores, are changing their buying patterns and behavior. For example, he said cash-strapped restaurant owners, a group that buys regularly from Sam's Club, are shopping the stores more frequently to buy supplies as one day's cash flow allows them to buy supplies for the following day. No food storage among these small business customers, according to Wal-Mart's research.

Lee Scott also made a bit of news yesterday on the news program, saying the chain, which is the largest corporation and retailer in the world, as well as being the number one retailer of all products, including food and groceries in the U.S., has reached out to the incoming Obama Administration, offering to share its expertise in the health care and environmental areas with the President-elect, along with working in both areas with the new administration when it takes office in January 2009.

Scott said these are two areas that profoundly are effecting Wal-Mart shoppers and the companies that do business with Wal-Mart as vendors and service providers.

Wal-Mart "has reached out to President-elect Obama's team to work on the U.S. health care and energy issues," he said, adding that people critical of Wal-Mart's involvement in political debates were "on the wrong track."

"These are not times to be self-serving," Scott said. "We have a responsibility to participate."

[You can view a video of yesterday's roundtable discussion on "Meet the Press" here.]

Some would say, particularly in this serious recession where new customers are flocking to Wal-Mart daily in search of bargains as the chain's sales and profits the last two quarters have reflected, to paraphrase that old saying about automaker General Motors ("What's good for GM is good for America," an ironic quote today), 'What's consumer behavior today at Wal-Mart is likely similar if not the same consumer behavior in general today in the U.S.'

As such, the trends Lee Scott reported yesterday on "Meet the Press," particularly this one: "We're seeing an increase in food storage as people are cooking more at home," he said. They are "using leftovers more extensively," and buying more frozen food, is something all U.S. food and grocery retailers should take to heart, and focus their respective merchandising and marketing efforts around now.

Instead Fresh & Easy's merchandising and marketing focus all year has been more like that of a specialty foods retailer operating in good economic times.

For Thanksgiving Fresh & Easy promoted a gourmet turkey wrapped in smoked bacon and sage rather than a basic bird at a cheap price like nearly all other major chains did.

And when it comes to its public relations campaign, Fresh & Easy issues news release after news release about "green" retailing, premium, prepared foods and new store openings, but near-none about the values offered in its stores.

After all, according to Tesco, Fresh & Easy is a convenient neighborhood grocery and fresh foods store designed for "everybody" to shop at for food and groceries, featuring everyday low prices at least 15% below the everyday prices of its competitors.

This model and message isn't being communicated, nor is Fresh & Easy's merchandising emphasising this positioning in its stores, even though it is what it should be doing with a near 100% focus in this current down economy, which is even more down in California, Nevada and Arizona where Tesco operates its 104 Fresh & Easy stores than it is in many other U.s. states.

Based on Tesco's description of what Fresh & Easy is, that they are no frills stores for "everybody," with about the lowest prices around vis-a-vis the competition, the stores should be doing very well right now. They aren't.

While Scott and Wal-Mart learn about this new, recessionary customer, and focus the chain's stores on this customer which is paying big dividends for the chain, Tesco's Fresh & Easy Neighborhood Market USA seems oblivious to the current recessionary marketplace realities in its merchandising and marketing.

If at the helm of Fresh & Easy, we would be focusing near all of our merchandising, marketing and operational efforts in a laser beam like fashion on that value proposition, on the basic grocery and related categories like Wal-Mart is doing, and is winning out by doing so, across the board.

Perhaps a mission statement something like this: Fresh & Easy: "We are a no frills grocery market where you can get food and groceries for the best prices. No gimmicks. No fancy displays. Just the best prices available on groceries and fresh foods (and a few special treats as well) when you need them. We know the times aren't easy. That's why Fresh & Easy is here for you."
Posted by Fresh & Easy Buzz at 8:34 PM