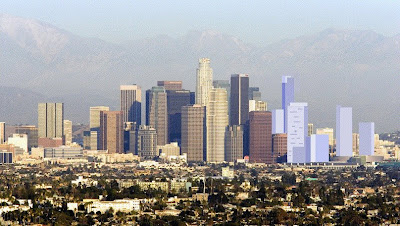 From the Fresh & Easy Buzz Editor's Desk: The concept and reality of "food deserts," generally poor, urban inner city neighborhoods (but also rural areas) underserved by food and grocery stores offering basic grocery products and fresh foods at affordable prices, is getting increasing attention in the United States and globally.

As Fresh & Easy Buzz readers are aware, we've written about the "food desert" phenomenon extensively on the Blog, particularly as it relates to Tesco's Fresh & Easy Neighborhood Market, which has as one of its stated retail strategies to locate its small-format, combination basic grocery and fresh foods markets in urban neighborhoods presently underserved by supermarkets.

Tesco's Fresh & Easy has thus far opened 2 of its 83 grocery stores in neighborhoods which can be defined as meeting the "food desert" definition. One of these stores is in the low income, primarily African American and Hispanic city of Compton in Southern California. The other is in Los Angeles' Eagle Rock neighborhood, which is more of a middle-income and rapidly gentrifying neighborhood, but is underserved by supermarkets.

Additionally, Tesco's Fresh & Easy is building a grocery market in a low-income neighborhood underserved by such food stores in south Los Angeles. That store is set to open next year.

Those two stores -- one in a low-income, inner city neighborhood in Oakland, the other in San Francisco's Bayview-Hunters Point neighborhood -- both will be in neighborhoods which currently are underserved by grocery stores offering groceries and fresh foods at decent prices to residents.

Tesco had panned to open a second Fresh & Easy store in an Oakland inner city food desert neighborhood. However, the retailer decided not to do so, as we reported here in May, 2008.

Tesco also plans to build a Fresh & Easy market in Sacramento's Oak Park neighborhood, an historically low-income part of the city that's fast becoming middle class and even trendy. Oak Park however currently does not have a grocery store in the large neighborhood, requiring its resident to drive or take public transportation a couple miles each way whenever they want to shop for groceries.

While Tesco has thus far opened only 2 of its 83 grocery markets in "food desert" neighborhoods -- and out of the thus far 22 (San Francisco Bay Area) and 19 (Sacramento/Vacaville region) Fresh & Easy markets set to begin opening next year in Northern California only the three mentioned above so far are in neighborhoods historically and presently underserved by supermarkets -- the retailer is about the only one in the Western USA making any effort in that direction as part of its retail location strategy.

California, Nevada and Arizona's (the three states the Fresh & Easy grocery stores are in) main supermarket chains and most of the independents are in the main staying away from locating stores in these urban, inner city "food desert" neighborhoods.

There are a few exceptions. For example the Southern California-based Ralphs supermarkets chain, which is owned by Kroger Co., opened a gleaming 55,000 square foot Ralphs Fresh Fare (it's upscale format) supermarket in downtown Los Angeles last year as part of an upscale residential loft (on the ground floor) development. Downtown Los Angeles, which is increasingly becoming a residential and related commercial neighborhood for young professions and baby boomer retirees, was seriously underserved by food stores until Ralphs opened that store last year.

There are a few other exceptions, from a few other chains and independents, but they are just that -- limited exceptions -- and far from even approaching the norm.

In fact, based on the percentage of Fresh & Easy stores Tesco has thus far opened in "food desert" neighborhoods (2 in Southern California and non yet in Nevada or Arizona out of 83) the strategy of locating stores in underserved neighborhoods also appears to be the exception for Fresh & Easy Neighborhood Market to date as well as it is for the oter retailers.

Our analysis happens to be that locating stores in "food desert" neighborhoods actually is a smart strategy for most retailers, where specific formats make sense. And we're actually surprised Tesco hasn't either opened or began construction on more of its Fresh & Easy stores in underserved neighborhoods, since there's lots of opportunity out there, along with the fact it's part of the grocery chain's stated retail strategy.

Earlier this evening, we read an article about "food desert" neighborhoods in the U.S. on a website called Worldchanging.com. The piece offers a good overview of the "food desert" issue in the U.S. from a public health perspective, along with providing some interesting statistics.

We therefore wanted to bring the story to Fresh & Easy Buzz readers, since it not only is an important topic, it also relates to one of Fresh & Easy neighborhood markets stated retail strategies, which is to locate some of its small-format grocery stores in neighborhoods underserved by supermarkets of any size offering basic groceries and fresh foods at reasonable prices to the residents of those neighborhoods.

Further, since the piece looks at the public health aspects of underserved neighborhoods, we think the 'food desert" issue is ultimately a social one in many ones; and one we should all be concerned about as members of society.

The story, "Food Deserts, Disease and the Future of Public Health," is short and concise. You can read it here.

Click here to read a selection of stories on the "food desert" issue published previously in Fresh & Easy Buzz. Additionally, this piece, "Fresh But Never Easy: Tesco's Long But Rapid South-North March in the Nation-State of California," offers related information. Notice the various city links at the bottom of the linked story.