Andy Bond, CEO of Wal-Mart-Owned Asda in the UK, Offers His 'Two Pence' Worth On the Pre-Christmas, Deep-Discount Festival Promotion By Tesco-UK 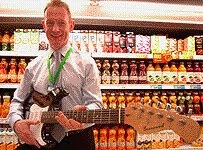 Asda CEO Andy Bond, in one of the chain's UK supermarkets, says he wants to "rock" the British food and grocery retailing business. He has parent company Wal-Mart Stores, Inc.'s resources and support behind him to do so. (Photo credit: This is Money-UK.

Retailing News From Across the Pond

Yesterday, we reported in this story [Tesco Slashing Prices By 50% on 1,000 Items For Four Days in its UK Stores; Will We See A Similar Promo at Fresh & Easy USA?] about a pre-Christmas holiday promotion Tesco, which owns and operates Fresh & Easy Neighborhood Market in the Western USA, started today in which the retailer is slashing the prices on 1,000 food, grocery and gift items in its United Kingdom stores by 50%. The 1,000 item, half-price promo ends in Sunday.

Tesco's big price slashing promotion comes on the heels of similar pre-Christmas holiday promotions already conducted by UK food, grocery and general merchandise retailer Marks & Spencer (M&S) and the British department/general merchandise chain Debenham's. Tesco and the other retailers are trying to stimulate holiday sales, both on food, drink and grocery items, but even more importantly on general merchandise and gift items for Christmas.

Today, the day after our report and the day Tesco's 4-day, 1,000 items half-price holiday promotion started, Andy Bond, the CEO of Wal-Mart Stores, Inc.-owned Asda, the number two retail chain in the UK after number one Tesco, offered a blistering attack at retailers (he didn't name names but who he meant is rather obvious) who are doing such limited item, price percentage slashing pre-Christmas promotions.

Bond made his comments, which are worthy of the aggressive offensive action expressed by his namesake, British secret agent 007, James Bond, in the movies, in the UK's Independent newspaper today.

Asda's program has paid off for the chain this year. It's increased sales and gained a tiny percentage market share on rival Tesco and number three food and grocery chain Sainsbury's. Asda currently has about 17% of the UK market to Sainsbury's about 15% Tesco though is head over heels above both Asda and Sainsbury's when it comes to market share. It has an about 31% share of the UK food and grocery retailing market, nearly equal to what Asda and Sainsbury's control combined.

However, Tesco also is losing share to the small-format, deep discount chains Aldi, Lidl and Netto in the UK. Asda is holding its own against these smaller store rival discounters in terms of gaining a small overall share rather than losing any.

Below (in italics) is what Asda CEO Andy Bond had to say about those "no name" UK chains that are launching 4-day, limited items percent off promotions (aka: Tesco M&S and Debenhams).

The boss of Asda yesterday attacked the massive pre-Christmas discounts offered by his rivals, in a thinly-veiled swipe at retailers such as Marks and Spencer, Debenhams and Tesco.

Andy Bond, the supermarket chain's chief executive, said: "There are lots of struggling retailers who are confusing customers with 20 per cent off this day, 50 per cent off that day. That will stimulate sales in the short term, but that will not be the way to grow a business in the economic downturn.

"However, Mr Bond declined to name any specific retailers.

His comments came as Tesco said it would cut the prices of 1,000 products, including Christmas food, drink, toys and gifts, by 50 per cent this weekend.

Earlier this week, Debenhams launched its third three-day festive sale, with 20 per cent off many items.

Mr Bond criticised such hefty promotions as "gimmicky" and claimed that they sowed the seeds of "mistrust" among shoppers. Big sales days were "a horrendous way to run a retailer", he suggested. However, Asda has also held some significant one-off price promotions this year, particularly during the summer when it cut prices on selected items for a few weekends.

Mr Bond said Asda, owned by the US supermarket group Wal-Mart, had no intention of launching a range of discounted brands, such as those introduced by Tesco in September.

"It offers confusion rather than clarity," he said. "Adding a fourth tier to your brand hierarchy – I just don't get it."

Asda revealed that the sharp slowdown in consumer spending had led to radical changes in shopping patterns. For instance, customers are buying smaller portions of food, such as Christmas pudding, and pack sizes, as well as scrutinising sell-by-dates and purchasing more frozen food as they seek to reduce wastage. Mr Bond also said his customers were increasingly cooking from scratch and switching to Asda's cheaper own-brand products.

Asda said sales of hair dyes were up 27 per cent as customers cut back on trips to hairdressers. Sales of curry ingredients had jumped by 40 per cent in the past year, balsamic vinegar had risen by 70 per cent, olives were up by 50 per cent and champagne rocketed by 100 per cent as shoppers shunned restaurants to cook and entertain at home.

The doubling in sales of champagne at Asda also suggested that consumers were seeking value for money and the grocer was attracting more middle-class shoppers, Mr Bond said.

However, sales of some ready meals had fallen by 40 per cent as customers attempted to save money by cooking their own meals.

Mr Bond said he believed the current downturn would lead to a new generation of British consumer, who was more focused on cutting waste, seeking out low prices and spending more time entertaining at home, such as with Nintendo Wii consoles.

He added: "We are moving into an era of the frivolous being unacceptable and the frugal being cool. It won't be everybody, but there will be a type of consumer that will be defined at this moment that will stay with us for a long time."

U.S. retailers seldom offer their opinions of the competition let alone go after their practices and programs. That is one of the many reasons we do enjoy the British food and grocery retailing industry.

Of course Price is an equal opportunity fun poker. He loves going after M&S chairman and CEO Sir Richard Rose, who Price calls "The King of Pants" (M&S sells lots of its own brand clothing, along with food, groceries and lots of other things, and its men's pants were named the best quality in the UK this year). The men are friends as well as competitors.

Price also loves digging Tesco CEO Sir Terry Leahy, as well as Asda's Andy Bond. In fact, if one is a CEO of a British food and grocery retailing chain and hasn't been the subject of one or more of Price's jabs in the UK press, or in his own Blog on the Waitrose Website [www.waitrose.com], then there must be something wrong with them.

More "Retailing News From Across the Pond" at the links below: