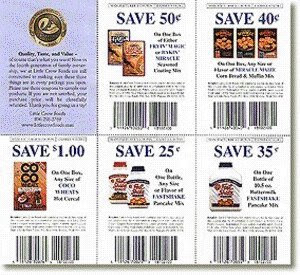 U.S. consumers are using manufacturer's cents off coupons in higher percentages today than at anytime in recent history, and that use is expected to increase even more throughout next year as the current economic recession gets even deeper.

The use of manufactuerers' coupons, particularly for food and grocery items, hase been an entrenched merchandising and promotional feature of U.S. food and grocery marketing and retailing for decades. The coupons allow consumers to save various amounts on their purchases, allow marketers to control and track their promotional spending (compared to offering off-invoice type promotions to retailers, for example) and are a win for retailers because they get added sales while getting paid-back for the coupons' value by manufacturers.

According to data compiled by Nielsen, coupon-clipping Americans now comprise a whopping 86% of all U.S. households. Those coupon-clippers drive 89% of all-outlet dollar sales, Nielsen says its research shows.

The primary vehicles for manufacturers cents off coupons today still are paper-based. Most manufacturers' coupons are still distributed in newspaper free-standing-inserts (FSI's) or through direct mail.

However that traditional coupon delivery system is changing. The Internet and other digital media are making it much easier for companies to distribute coupons, and making it much more convenient for shoppers to gain access to the coupons in real time.

For example, lets say a consumer wants a 50 cent off coupon for Tide Laundry Detergent before heading off to the supermarket. No problem generally. Today she can go online and most likely find the Tide coupon, along with many others, on the Proctor & Gamble company Web site or one of the many third party Web sites like coupons.com that are devoted to coupons. Once the coupon is found, she just has to download it and print it.

We think, as does Nielsen, digital methods of distributing manufacturers' coupons are currently just in their infancy. Eventually we see manufacturers regularly making coupons available in real time to consumers right at the point-of-purchase via their cell phones and other handheld electronic devices, for example.

2. Electronic or store entrance coupon delivery. Instead of tagging consumers as they leave the store post-purchase, next generation systems will deliver coupons via mobile phones, Internet or in-store devices when shoppers enter the retail location or are in the mood and in the aisle, ready to buy.

4. Stores offering engagement and entertainment opportunities. Look for personal shopper holograms to guide you through the store or shelf talkers activated by your cell phone to offer special discounts. Walmart has pledged to invest $10 million and two years of testing to determine the optimal placement of in-store screens and special shopper programming.

Tesco's Fresh & Easy Neighborhood Market stores don't accept manufacturers' cents off coupons from consumers, which in our analysis puts the grocery chain at a serious competitive disadvantage, particularly in current recessionary America where shoppers are using coupons at an ever-increasing clip. Numerous studies show 30% more consumers are clipping manufacturers coupons this year compared to 2007, for example.

Fresh & Easy does create its own coupons. The grocer's current coupon, which it includes in its direct mail advertising circular every three weeks, sometimes posts on its Web site, and distributes in the stores in a now limited fashion, is a $6 off total purchases of $30 or more coupon.

This coupon though, unlike manufacturers' coupons that all other supermarkets and discounters like Wal-Mart, Target and others accept, is funded by Tesco's Fresh & Easy, meaning the $6 comes out of the retailers profit margins. When shoppers use one of those coupons and buy only $30 worth of purchases, for example, that results in a 20% reduction for Fresh & Easy, right off the top line, and ultimately right off the bottom line.

On the other hand, manufacturers pay retailers the face value of the manufacturers' coupon plus a handling charge of a few cents each for the coupons. While it is true there is a certain amount of labor involved for a supermarket chain to gather all the paper coupons each day and to regularly ship them off to a coupon clearing house, the benefits of accepting them -- increased sales, shopper loyalty, ect. -- far outweigh the negatives of doing so, which is why close to 100% of U.S. supermarkets, grocery stores, mass merchandisers and drug stores accept manufacturers coupons.

Many supermarket chains even partner with manufacturers and run special manufacturer coupons in their advertising circulars. These are most often called "manufacturers' in-ad coupons." Retailers love these because they can only be used at their supermarkets, which guarantees manufacturer-funded incremental sales on the items in their stores.

Tesco's Fresh & Easy decided not to accept manufacturers' coupons from the beginning (the first stores opened in November, 2007) as part of its philosophy of eliminating as much labor as possible in its stores, which includes eliminating store clerks' handling of paper (accept cash of course). That's why Fresh & Easy stores don't accept paper checks of any kind. They also refuse to accept WIC vouchers, which are the paper coupons the U.S. government gives to the poorest of the poor mothers so they can purchase infant formula, fresh milk and juice, whole grain cereals and fresh produce for their infants and toddlers.

Like manufacturers' coupons, the WIC vouchers are free money in that 100% of the value of the purchases made using the coupons is paid to the retailer by the federal government.

Nearly every supermarket in the U.S., as well as most drug chains, mass merchandisers and even most convenience stores, accept WIC vouchers. Tesco's Fresh & Easy doesn't as part of its paper avoidance model. The WIC vouchers are different than food stamps. Fresh & Easy accepts food stamps from shoppers because the federal government now distributes them to people in plastic debit card form rather than as paper, which used to be the case.

Earlier this year, Tesco's Fresh & Easy reported sales of alightly over $300 million for its first nine months of operations. Based on the number of new stores opened since then, we estimate the chain is approaching annual sales of about $500 million.
Assume that if the chain accepted manufacturers' coupons it could add 2% (and that is a reasonable assumption) to its total sales. That means an additional $1 million in gross sales (based on the $500 million sales number), which isn't too shabby considering doing so would merely be a policy that all of its competitors already have.

Additionally, think about all the shoppers who probably don't shop at Fresh & Easy at all because the stores don't accept the manufacturers' coupons. Accepting them could increase the potential customer pool of the stores.

Lastly, there likely are consumers who might use Fresh & Easy more as their primary food and grocery shopping venue if the grocer accepted the manufacturers' coupons. But since they don't, many shoppers split their shopping between stores that do accept the coupons and perhaps Fresh & Easy.

Just went to Fresh and Easy (Temecula CA) with mfr coupons for Cuties (california mandarins) and was shocked to find out they don't accept any mfr coupons.

Will be shopping less at Fresh and Easy for sure as any time I will be using coupons, I will be going to Winco.

Went to Fresh and Easy with coupons, and told my kids we will only being buying items if i have a coupon. I was so shocked to find out that they dont use the mfr coupons. Several of my items had to go back. That cut more than 50% off my bill, and the kids were so disappointed. I love F&E but i will be thinking twice about going to shop there. A person who never used coupons is now using them religiously and teaching my kids to save as much as possible too. F&E should promote that as well.