Tesco Slashing Prices By 50% on 1,000 Items For Four Days in its UK Stores; Will We See A Similar Promo at Fresh & Easy USA? 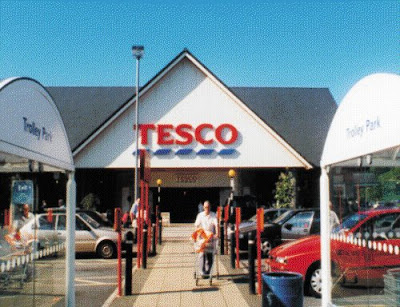 United Kingdom-based Tesco, which owns and operates the Fresh & Easy Neighborhood Market grocery and fresh foods chain in the Western United States, announced a bold move today for its United Kingdom stores, saying it will slash the prices on 1,000 items by 50% in all of its about 1,700 UK stores beginning on December 12, tomorrow, and ending on Sunday.

Tesco has various format stores in the UK, ranging from supermarkets and convenience-style stores to discount stores and hypermarkets. Many of these stores sell hard goods, soft goods and general merchandise (similar to Wal-Mart in the U.S.), as well as food and grocery products.

Like the U.S., the UK is in the midst of a serious financial crisis and severe recession. Consumers are spending less, particularly on general merchandise and gift items. In terms of food and groceries, many UK shoppers are seeking out the hard discount stores like Aldi, Lidl Iceland and Netto rather than shopping as regularly at supermarkets like those operated by Tesco, the UK's top food and grocery retailer, Sainsbury's, Marks & Spencer and others.

That's why, in addition to the 50% discounts on gift items and toys, Tesco also is deep discounting numerous food and grocery items in its UK stores.

Regarding sales of Christmas holiday gift items, Tesco's corporate commercial director Richard Brasher said today: "Customers are telling us that they are delaying their main Christmas purchases as they wait for bargains. So we are giving them some great bargains."

The retailer hopes the half price sale on gift items, along with groceries, will get UK shoppers out of the house and into Tesco stores this weekend to do their Christmas holiday shopping.

The big Fresh & Easy Buzz question is: Will we see Tesco's Fresh & Easy Neighborhood Market offer a similar three or four day sales promotion in its small-format Fresh & Easy grocery and fresh foods stores in Southern California, Nevada and Arizona prior to the Christmas holiday? Christmas is only two weeks away.
Posted by Fresh & Easy Buzz at 6:57 PM

you blog is very good...

Hmmm, I'm doubtful about this. In fact, I've personally seen prices skyrocket at Fresh and Easy over the past year. Thai Chicken Curry used to be $4.99, now it's $6.99. Many of the ready-to-eat items $6.99 now.

Except for the loss-leaders (bread, oj, milk, cheese), everything else has gone way up.

The $6 off $30 coupons are nearly half of 50%, so they just could double those coupons for a couple days at Fresh & Easy.

I've noticed the same at F&E on the prices of the rpepared foods. Way up. Vons is now cheaper. I think they jacked the prices up then keep using the coupons. Safeway has a buy one get one free on its Signature Cafe prepared foods three weeks ago. I can get same entrees there for $1.00 less regularly than at F&E with these price increases there.