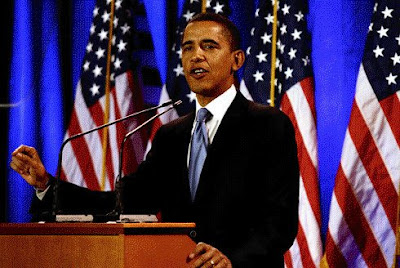 The U.S. economy will begin to look much more like the European economic model beginning next year as President-elect Barack Obama proposes a major government-funded public works program to jump-start the mortibound U.S. economy.

President-elect Barack Obama said today in a radio address to the nation he plans to revive the frozen U.S. economy through a job-saving and creating public works plan on a scale unseen since the building program of the interstate highway system in the 1950s.

The interstate highway program, along with numerous other large-scale infrastructure projects, came under the administration of Republican President and former General Dwight David Eisenhower, who as the Supreme Allied Commander who led the defeat of Nazi Germany in World War II, implemented major public works programs in the United States similar to those the U.S and Europe paid for and carried out to rebuild Germany and other European nations following the war.

President-elect Obama's plans for the massive building program were welcomed today by nearly all of the nation's Governors, who have been pressing him to announce such a program since meeting with the next U.S. President last week at a special session in Pennsylvania arranged by that state's governor, Edward Rendell, who is the current president of the National Governor's Association, along with being one of three Governors who last year launched a national campaign to rebuilt America's crumbling infrastructure. The other two Governors are California Governor Arnold Schwarzenegger and Michael Bloomberg, the Governor of New York. Rendell is a Democrat, Schwarzenegger a Republican and Bloomberg is an Independent.

President-elect Obama laid out a broad outline of his plans during his radio address today. He plans to talk more about the specifics of the program between now and when he takes office on January 20, he said today.

However, based on what we heard from President-elect Obama today, if supported by Congress, which is likely, it will be the biggest public works program the U.S. has seen since the Eisenhower Administration.

In fact, we have respectively given President-elect Obama the new nickname: "Barack the Builder," following his announcement today of his proposed massive public works program. Remember you read it here first.

Yesterday it was learned that over 500,000 jobs were lost in the U.S. in the month of November alone. This startling number has changed the mood in Washington, DC in terms of how severe the recession really is, and in terms of how much money the government needs to spend to stimulate it.

One trillion dollars of economic stimulus is now being discussed.

Additionally, Democratic leader Nancy Pelosi and President George W. Bush appear to have agreed on a compromise that will get an immediate $15 billion dollars to the 'Big 3' Detroit Automakers. Sources in the nation's capital tell us the surprise compromise only came about because of the half a million jobs lost in November. Economists are expecting similar numbers of lost jobs for the months ahead, even without a failure of one or more of the U.S. Automakers.

President-elect Obama's announcement of his massive public works-stimulus plan today also were prompted (particularly the size and scope of the program) by the 500,000-plus November jobs loss number, along with predictions by nearly every economist and financial analyst that things are likely to get even worse in 2009.

The U.S. food and grocery retailing industry has been far less hurt by the recession than other retailing segments. For example, 91,300 non-grocery industry retailing jobs were lost in November. [Retail industry loses 91,300 jobs in November.]

Consumers have dramatically cut back on away-from-home eating, spending that money at the grocery store because they are cooking and eating more at home because they have to. This has helped the food and grocery retailing industry in the recession.

However, the industry is a "main street" business, and despite the fact people still have to eat during a severe recession, they can't afford to eat like they desire, which means they aren't buying like they do in better times. They also are searching out the stores where they can spend the less for groceries, which isn't good news to many segments of the food retailing industry.

Therefore, we believe the U.S. food and grocery industry will embrace and support President-elect Obama's massive public works jobs plan because having fewer people lose their jobs and putting out of work people back to work means Americans will have more money to spend at the grocery store. We expect industry trade associations like FMI to come out in support of the Obama plan soon.

Following the November jobs loss report last week, there is a growing consensus in Washington, including among many Republicans, as well as in the private sector, that it is going to take the invisible hand (although not so invisible in recent months) of government to right the free market ship at present and into 2009. And that hand has to be a big one.

There's also an increasing consensus that the only way to do so is to spend big, which is why we are starting to hear stimulus package numbers like 1 trillion being talked about.
Posted by Fresh & Easy Buzz at 4:46 PM

We need to get on about the business of becoming energy independent and using alternative sources of fuel. The high cost of gas this past year seriously damaged our economy and society. While we are doing the happy dance around the lower prices at the pumps OPEC is planning further production cuts to drive prices back up. We have the knowledge, we have the technology, what America lacks is a plan. Jeff Wilson has a new book out that is beyond awesome. The Manhattan Project of 2009 Energy Independence NOW. He walks you through every aspect of oil, what it is used for besides gas, our depletion of it. The worlds increased need ie 3rd world countries becoming more modernized and consuming more. He explains EVERY alternative energy source and what role they can play to replace oil. His research is backed up with hard data and even includes a time frame and proposed legislative agendas to wean America off oil. www.themanhattanprojectof2009.com

Like the 'Barack The Builder.' E-mailed it to a couple friends in journalism. Maybe they will pick up on it.

Enjoy the Blog. Am in packaged goods brand marketing but did some work with Tesco in the late 1990's when lived in the UK. Keep up the good work,