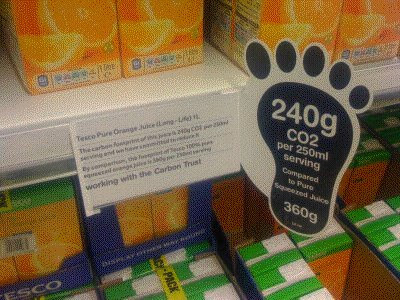 Pictured above: A Tesco "carbon footprint" informational shelf tag (in this case for orange juice) in one of the retailer's United Kingdom supermarkets. Tesco is the only food and grocery retailer in the world using the consumer informational labels at the point-of-purchase.

United Kingdom-based Tesco, which owns and operates Southern California-based Fresh & Easy Neighborhood Market USA, has scored second overall, and number one in the "Grocery & Drug" retailing category, in an analysis of how 63 of the world's largest consumer-focused and technology corporations are confronting and handling the challenges of climate change.

The survey and analysis was conducted by the group Ceres, which is a leading coalition of investors, environmental groups and other public interest organizations, which works directly with companies to address sustainability challenges such as global climate change.

The report uses a "Climate Change Governance Framework" to evaluate how 48 US companies and 15 non-US companies are addressing climate change through board of director oversight, management execution, public disclosure, GHG emissions accounting and strategic planning and performance. Some of the largest global companies in 11 consumer and technology sectors were evaluated using a 100-point scoring system based on this framework, according to Mindy S. Lubber, the president of Ceres.

The 63 corporations rated ranged from food-grocery and apparel retailing companies and technology businesses, to beverage companies, restaurants, and travel and leisure operations. You can view all of the 63 companies and their rankings by category here.

Natural and organic foods retailer Whole Foods Market, Inc. came in third, with a rather low score of 27, followed by Kroger Co. (score of 23), drug chain Walgreen's (21), and the CVS drug chain came in last,with a score of 12.

U.S-based mega-retailer Wal-Mart did fairly well in the Ceres climate change scorecard with a numerical score of 69 on its climate change efforts ranking index. Ceres placed Wal-Mart, which is the number one global retailer and the largest seller of food and groceries in the U.S., in a different category -- "Big Box Retailers" -- which is why it isn't included with Tesco and the others in the grocery and drug retailing category. If it were, Wal-Mart would score second after Tesco, with a score of 69, compared to Tesco's 78.

The same is the case with the French global retailer Carrefour, which along with Wal-Mart and Tesco is one of the top-three food and grocery retailers in the world. Carrefour came in second in the "Big Box Retailer" category, with a score of 52. Wal-Mart is the largest retailer in the world in terms of annual sales, followed by Carrefour, and then Tesco at number three.

U.S. retail chains Costco and Target, both which are major food and grocery retailers, also were included in the "Big Box Retailer" category. Target placed fourth with a score of 37, right after third-place office supply chain Staples, while warehouse club chain Costco came in at number eight (second from last in the category), with a score of 14.

Electronics chain Best Buy was number five, after number four target, with a score of 36; the Lowe's home store chain was sixth, with a score of 17; Home Depot seventh (score of 15); then Costco; followed by the Bed, Bath & Beyond home products' chain in last (ninth) place, scoring a 10.

All of the report's detailed results are here.

The Ceres group says more than half of the 63 consumer-focused and technology companies it examined regarding climate change efforts scored below 50, which the group says demonstrates that much more effort is needed by the overall corporate sector to address climate change and global warming.

"Many companies, especially technology and pharmaceutical firms, are doing a better job of integrating climate change into their business strategies," said Mindy S. Lubber, president of Ceres, which published the report, Corporate Governance and Climate Change: Consumer and Technology Companies. "But the overall responses among these companies are very spotty, especially in the restaurant, real estate and travel & leisure sectors where climate change is barely on their radar. With or without a recession, climate change is a core business issue that all consumer and tech companies should be focused on."

The relative high scores in the Ceres of the three top-ranking global food and grocery retail chains -- Tesco, Wal-Mart and Carrefour -- is a good sign in Fresh & Easy Buzz's analysis. It shows the global "big three" are leading on the climate change issue in terms of walking the walk as well as talking the talk. Of course more needs to be done. But all three are showing strong leadership on the issue, particularly compared to corporations in other sectors.

One of the major efforts that gave Tesco its relatively high score is a program started by the retailer last year in which it is putting product "carbon footprint informational labels," which are similar to nutritional information labels, on shelf tags in its stores in the UK. The retailer also is working on putting the "carbon labels" on its store brand food and grocery items, starting with its packaged goods.

The "carbon footprint shelf tags" have information such as the amount of energy input it took to create the product and the like. The content of the shelf tags is designed to show a product's "carbon footprint," as the photograph at the top of this story shows.

Tesco CEO Terry Leahy has told the branded packaged goods companies that sell their brands to Tesco that the retailer expects them to start putting the "carbon labels" on their manufactured products in the not to distant future. Tesco is the leader in doing this in that it's the first (and only chain so far) to start labeling the food and grocery products at the point-of-purchase in its stores with the "carbon footprint" consumer information. Tesco isn't currently using the "carbon footprint shelf tags" at its Fresh & Easy stores in the Western U.S. [For more information read: Tesco PLC CEO Terry Leahy: 'We Must Go Green.']

In addition to reading how the various 63 corporations scored by category, you can read a summary of the report, as well as download the full report, here. You can also view a full profile of the food and grocery retailers in the Ceres report at these two links: Grocery & Drug Retailers and Big Box Retailers. The profiles for Tesco, Safeway Stores and WHole Foods Market are at the "Grocery & Drug" link. Those for Wal-Mart, Carrefour, Target and Costco are at the "Big Box Retailers" link.

You can learn more about Ceres (pronounced "series") here and here.
Posted by Fresh & Easy Buzz at 2:46 PM