Despite Arizona Becoming the Land Where Retail Giants Are Opening Scores of Stores, Independents Fear Not - We Profile Two Such Entrepreneurs 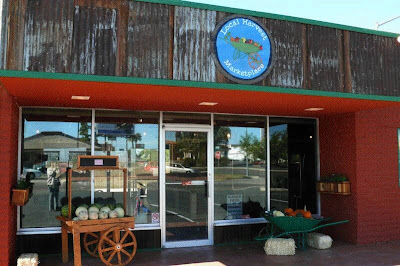 Wal-Mart operates over 30 of its Neighborhood Market smaller-format supermarkets in the state, and recently entered the market with its first four (and soon to be fifth) small-format Marketside combination grocery and fresh foods stores. More new stores of both formats are opening in Arizona.

Then there's Trader Joe's, which operates nearly 30 of its famous specialty markets in the state.

But these aggressive retailing giants, all operating their own versions of small-format, neighborhood oriented grocery and fresh foods markets, aren't stopping some independent food retailing entrepreneurs from opening their own new small-format fresh food and grocery concept markets in Arizona -- in these two particular cases in Tucson.

And, both new stores have a similar focus: They are neighborhood markets that put a major emphasis on locally-produced food products, fresh produce, convenience, natural and organic foods (but also conventional basics) and in-store fresh, prepared foods and beverages.

Local Harvest Market features fresh produce, natural and organic groceries, ready-to-eat and ready-to-heat prepared foods all with a local focus, meaning most of the store's offerings are products produced locally in Arizona or nearby. The emphasis is on products produced and marketed by local companies, artisans and purveyors.

Local Harvest Marketplace also has an outdoor dining patio where customers can sit and eat and drink the store's fresh, prepared foods offerings. The store's owners say they will soon extend their fresh produce sales out into the patio, offering a farmers market for shoppers, featuring all sorts of local produce, from the afternoon and evening. They also plan to invite local artisans and craft makers to display and sell their handcrafted items at the open air market. Plans also call for having free entertainment on the patio in conjunction with the farmers market concept on Saturdays each week.

Since the market's emphasis is on local food, grocery and prepared foods items, they feel the patio farmers market will offer an additional opportunity to offer a greater selection especially of seasonal local fresh produce. Inviting the local artisans to sell their handmade items at the open-air farmers market also will enhance the local positioning and emphasis of the independent market they believe.

A second new independent grocery and fresh foods market, Maynards Market & Kitchen, is set to open on December 12 in the Historic Depot in Tucson at 400 North Tool Avenue. The store is named after the famous San Francisco, California artist Maynard Dixon who lived for a time in Tucson. Some of his artwork graces the walls in Tucson's historic Depot building where the new market is located.

Below is how Maynards Market & Kitchen describes its format and philosophy:

THE CONCEPT IS SIMPLE. BUY LOCALLY WHEN YOU CAN. BUY RESPONSIBLY WHEN YOU CAN'T. WITH A SLANT FOR THE LOCALLY GROWN AND PRODUCED, MAYNARDS MARKET WILL CARRY AN ARRAY OF REGIONAL PRODUCTS ON OUR SHELVES AND AT OUR FARMERS MARKET. BUT WE DON'T STOP WITH VEGETABLES AND CHEESES. MAYNARDS IS A NEIGHBORHOOD MARKET WITH FRESH JUICES, PASTRIES AND COFFEES. HEALTHY GRAB AND GO AND SIMPLE NECESSITIES FROM ASPIRIN TO TISSUE. AND OF COURSE, GOOD WINES.

The new market is a combination basic grocery store and fresh and natural foods market, as the mission statement above describes. The store puts an emphasis on local products like Local Harvest Marketplace does but doesn't offer only food, grocery and non-foods items produced locally. Note the aspirin and tissue, for example.

The grocer is asking local residents for their ideas on its Web site prior to the store's opening on December 12, and plans to seek regular customer input as part of its operating philosophy. The market also wants to feature as much fresh produce and food and grocery products as is possible from local growers and purveyor.

Both Local Harvest Marketplace and Maynards are tapping into the increasingly popular local foods movement in the United States. While the current recession may have pushed aside "local" as a key priority for many consumers in favor of price at this particular point in time, it remains a fast-growing movement and concept. In addition, in many cases, including fresh produce, local actually is cheaper than non-locally produced foods.

Local is an important concept in Arizona because the state produces lots of fresh market crops as well as has numerous specialty and natural foods companies. The concept is growing from one that originally touted primarily eating locally-produced foods for the quality and taste factors to a much larger concept of buying and eating locally-produced because of the economic benefits doing so brings -- more jobs in the region, tax money for local governments, greater economic development, ect.

The fact that the entrepreneurs we've profiled in this piece have and are opening their respective small-format, independent food and grocery markets in the current recession shows the dynamism of food retailing in the U.S. It also shows food retailing entrepreneurs are willing to stake their money and future on a retail concept they believe in -- in these cases neighborhood stores with a local focus -- even though grocery retailing giants Tesco (Fresh & Easy) and Wal-Mart (Marketside) are opening their own versions of small grocery and fresh foods markets all around them.

Welcome to the Phoenix, Arizona Metropolitan region food and grocery retailing market, which is fast becoming one of the most interesting, dynamic and competitive markets in the U.S.