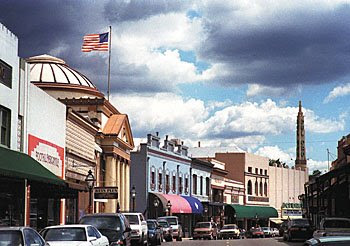 Downtown Grass Valley, California (pictured above) is considered a model for small towns and cities in the U.S. The city has retained the downtown's historic character as one of California's Gold Rush-era towns while at the same time adding a modernistic touch such as the use of colorful facade awnings.

Earlier today we wrote in this post, "Despite Postponing its Northern California Launch, Fresh & Easy Continues to Grab New Locations in the Region, Including Going Rural," about Tesco's Fresh & Easy Neighborhood Market signing a lease for a new store location in the Goldtown Plaza Shopping Center in the small (13,732 population) Northern California town of Oroville in Butte County.

In addition, we suggested in the piece now that Tesco has signed a lease for one of its small-format, convenience-oriented grocery and fresh foods markets in a more rural region in Northern California -- Oroville in Butte County -- you could look for it to do more of the same, along with continuing to pursue its metropolitan region focus in the market.

The Union newspaper, which serves Northern California's Nevada County, north of Sacramento, reports today a Tesco Fresh & Easy market could be going into a location in the Nevada County city of Grass Valley which has for years been home to the city's Ford auto dealership. The dealership is moving to the nearby and larger city of Auburn.

Don Neronde, the co-owner of Grass Valley Ford, 'announced Wednesday he is relocating his Ford dealership to Auburn from Grass Valley at year-end, as was widely expected, but he said in an interview that Fresh & Easy is a leading candidate to build a store where Grass Valley Ford has been located, as well as another store in Brunswick Basin (a part of Grass valley),' according to the story in The Union by staff writer Jeff Pelline.

"It won’t be vacant long,"said Neronde, referring to his dealership at 800 S. Auburn St. in Grass Valley.

You can read the entire report from The Union here.

The story mentions that Rite Aid also is interested in the Grass Valley Ford site. This makes since for two reasons: The Ford dealership is too large for a Fresh & Easy market all by itself and the grocery chain often locates its Fresh & Easy stores next door to a drug chain store like Rite Aid or Walgreens. Each chain could take half of the dealership and remodel the building into their respective stores, something Fresh & Easy has done numerous times with a variety of vacant buildings.

An interesting aside is that the story quotes a Fresh & Easy spokesperson as saying the retailer is just in its "early stages" in Northern California. [The quote: "People from Fresh & Easy are expected to visit the area again later this month, Neronde said. A spokesman for Fresh & Easy said the store’s expansion in Northern California was in the “early stages,” but he pointed out the store had announced plans for 19 sites in the Sacramento region earlier this year.]

As we've reported, that target was changed to early 2009. That launch date has now been postponed. Based on our sources we believe the first Fresh & Easy stores in Northern California are likely to open in mid-2009. But that's in flux at the present. [We aren't faulting the reporter for The Union regarding the quote, by the way. He was merely reporting what the spokesperson told him. And from the spokesperson's perspective, we suppose one could say "in the early stages" since no Fresh & Easy stores have yet to open in Northern California.]

Regarding Fresh & Easy potentially going into the Grass Valley Ford Dealership location, we did some checking with sources today, and it's far from a done deal yet. We learned the grocery chain is interested but has yet to sign anything, not even a letter of intent. Perhaps Ford dealer Don Neronde has some strong verbal agreements though, which it does sound like from the optimism or positive attitude he expresses in the story in The Union.

There also are other parties interested in the Ford dealership site. The dealership also isn't currently zoned for a retail food store. That situation could be changed by the city of Grass Valley though.

Grass Valley is an interesting city. It's a small town of about 12,000 residents. Those residents are a mix of natives and transplants, many from the San Francisco Bay Area who have moved to the town because of its natural beauty, counter-cultural nature in many ways, it's strong artistic community, and its low cost of housing (at least a decade ago) compared to the Bay Area. The population has grown by 21% since 1990, which demonstrates the growth from the Bay Area and other region migrants.

The Sierra foothills town, which was one of the places where much gold was discovered during the 1800's California Gold Rush, has an attractive and historic downtown district which you can read about here.

Grass Valley and Nevada County also are tourist destinations. The region also is on the way to the northern Nevada resorts of Lake Tahoe and Reno (gambling, ski resorts, ect.). Therefore Grass Valley, Auburn and other towns in the region draw travelers from the Sacramento region (which is just a little over an hour way), the Bay Area and other parts of Northern California on a regular basis. This greatly benefits the region's restaurants and to a lessor degree food and grocery retailers.

The current population of Nevada County is just over 100,000 residents.

Like Oroville, Grass Valley is much more rural than the metropolitan regions -- the Bay Area and Sacramento/Vacaville -- where Tesco's Fresh & Easy Neighborhood Market has thus far focused its store locations on. Grass Valley and Nevada County are contiguous to Sacramento though (a little over an hour away), and midway between that region and northern Nevada, where Tesco also plans to open some of its Fresh & Easy grocery and fresh foods markets.

Grass Valley and Oroville, which are about three hours apart in very different regions, both are small towns, each having fewer than 14,000 people. Butte County (Oroville) and Nevada County (Grass Valley) both also are small counties for California; Nevada County having just over 100,00 residents and Butte County with just slightly over 200,000.

Obviously Tesco is now interested in the more rural parts of Northern California as well as the metropolitan regions, which makes sense because as we've been writing all along, the retailers strategy, correct or incorrect, is what we call "critical mass," picking select regions -- Southern California, Metro Las Vegas, Nevada, Metro Phoenix, Arizona and now Northern California -- and then creating sub-regions within those markets and opening Fresh & Easy small-format, convenience-oriented neighborhood grocery and fresh foods markets within about 1.5 -to 2 miles from each others in those given neighborhoods.

We will have more to say about this strategy in light of the fact the first batch of Fresh & Easy stores have now been open slightly over a year, in an upcoming piece.
Posted by Fresh & Easy Buzz at 9:43 PM