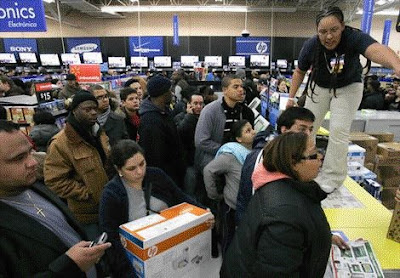 Lina Munoz, right, of Union City, N.J., a Wal-Mart employee, stands on a counter to help customers at the Wal-Mart store in Secaucus, N.J. on Black Friday, the day after Thanksgiving. [Photo credit: Associated Press.]

The family of the temporary Wal-Mart employee at the Long Island, New York USA Wal-Mart store who was trampled to death by stampeding shoppers on the day after Thanksgiving, know as Black Friday, the kickoff of the Christmas holiday shopping season, has sued Wal-Mart Stores, Inc. and others over the worker's death.

Additionally, local police are suggesting the Long Island Wal-Mart store could have prevented the workers death.

No criminal charges against Wal-Mart have been filed to date.

However, legal experts say there likely will be additional lawsuits filed against the company.

The death also might trigger investigations into Wal-Mart policies involving store safety, along with the policies of other retailers as well.

Jeffrey Toobin, a former federal prosecutor and current legal analyst for cable network CNN and legal affairs writer for the New Yorker magazine, said today on CNN he didn't think criminal charges would likely be filed against Wal-Mart Stores, Inc. over the tragic death-by-customers at the Long Island store because it would be extremely difficult to demonstrate an intent on the part of the retail chain regarding the incident. However, he added he would not rule out completely the filing of criminal charges, saying if the pressure to do so becomes great it could happen.

Below are a few select reports on the lawsuit from today:

The madness of the crowd and the economy

We can't help think about the symbolism of this sad incident this year. In this current economic recession, consumers are in a psychological state of mind for the Christmas holiday season unlike any other in modern times. No money, no credit, and even worse -- a lack of optimism. Despite that fact, Thanksgiving weekend sales were actually about 3% over 2007 Thanksgiving holiday weekend sales. That's odd.

Why the spending when most said it wouldn't happen? Why the madness of the crowd at the Long Island Wal-Mart store?

Perhaps it was all the discounts out there? Perhaps it's also all the pent up shopper demand within American consumers this year because of the recession, which now is official, and financial crisis, along with the housing foreclosures and the layoffs.

But we should remember, it is only consumerism.

But then perhaps only is the wrong word, since the U.S. and most other western economies are now built on consumption rather than producing. Like President George Bush said when ask right after the September 11, 2001 terrorist attacks what Americans could do to help: "Go shopping, go about your regular business."

And of course, what's the solution to the current recession? Increase consumer confidence so people will spend more. And since most don't have anymore to spend, give them another tax rebate stimulus check, and hope they spend it rather than use it to pay off credit card bills. In today's American economy, the consumer is King...and Queen. But also the goat when they can't spend.

Watching a video of the way that crowd stampeded over the Long Island Wal-Mart store employee, like the worker wasn't even there, made us think about how human beings could be so single-minded in pursuit of a deal on a product or two.

We will leave that analysis to the practicing behavioral and social scientists. But we do wonder if in some way the madness of that Wal-Mart store crowd is not a symbol of today's ravaged consumer, at least in some perhaps abstract way?

After the death-by-customers incident at the Long Island Wal-Mart store on Black Friday 2008, that term -- Black Friday -- now takes on a completely new definition besides its original one, signaling the start of the Christmas shopping season.
Posted by Fresh & Easy Buzz at 6:58 PM