Competitor News: Safeway CEO Steve Burd Says Small-Format 'The Market' Is 'Good' So Far But Not 'Great;' But Must Be 'Great' in Order To Expand 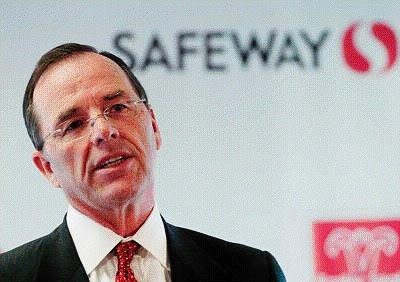 Safeway Stores, Inc. chairman, president and CEO Steve Burd (pictured above) offered an approximate eight month assessment of the chain's small-format store test, "the market by Vons", in Long Beach, California, which opened in May of this year, last Thursday during a meeting with analysts at Safeway headquarters in Pleasanton, California (San Francisco Bay Area.)
Burd's assessment thus far of the single test store of the grocer's "The market" format: "good, not great," Burd said on Thursday.
He said the Long Beach store is doing well but isn't setting the house of Safeway on fire, essentially.
Burd says Safeway will open at least two more of the small-format "The Market" stores next year. One of those two stores will be in a converted retail building, the other will be a built from the ground-up store, Burd said.
We believe the new construction store will be at this location in San Jose, California or this one in downtown Los Angeles, or both. which we broke the news on and wrote about earlier this year.
Burd said at the meeting that once the additional two "The Market" format stores are open, "unless the results go from 'good to great' and we feel we can open 30 to 50 of these per year, it won't make enough difference for these stores to be more than an experiment."
Burd's saying this about "The Market" shouldn't come as a shock to anybody, especially regular readers of Fresh & Easy Buzz. We've been writing all along since first reporting last year on Safeway's small-format development that it's an experiment and a test for the supermarket chain, which operates about 1,750 supermarkets under various banners in the U.S. and Canada, and is now ranked as the number four retailer of food and groceries in the U.S., after Wal-Mart, Kroger Co. and Costco.
Safeway's food and grocery retailing focus will continue to be on its Lifestyle format supermarkets. Burd said the company has nearly completed converting all of its supermarkets into its Lifestyle format, which combines discount retailing with a more upscale flair. The supermarkets are customized (we call it mass customization), ranging for being fairly mainstream to being super upscale, depending on the demographics and other criteria of the particular community and neighborhood the store goes into.
Burd also said at the analysts meeting that Safeway will further step-up its value proposition beginning early next year when it will make additional price cuts across all categories on numerous items in its supermarkets.
He also said the aggressive promotional programs, which even include the fresh, prepared and specialty foods categories in the stores, will continue and probably intensify beginning early next year.
Burd said Safeway "will survive" the recession in better shape than some of the price operators who are thriving now. "Recessions are temporary, and strong companies weather the downturns better than weaker companies," he told analysts.
"Some people on Wall Street have questioned whether we have the right strategy for a recession. But we believe you build a strategy to create long-term shareholder value, not to deal with a recession," Burd said.
So far he appears to be correct as Safeway has been doing fairly well despite the recession, thanks though in large part to the fact the grocer recognized the economic downturn early in 2008 and rapidly began expanding its value proposition.
CEO Burd told analysts that Safeway projects 2009 earnings per share of $2.34 to $2.44 and non-fuel ID sales growth of 2% to 3%.
"We believe that, despite all the price investments we plan, we will still be able to expand operating margins," Burd commented.
Reader Resource
Links to some past stories on Safeway's "The Market" from Fresh & Easy Buzz:
May 15, 2008: Breaking News: Safeway Opens its First Small-Format 'The Market' Grocery Store Today in Long Beach, California... June 5, 2008: Breaking News: Safeway Stores, Inc. Nearing Negotiation End-Game For its Second Small-Format 'The Market' Store Site; This One in San Jose, California... July 25, 2008: Breaking Competitor News: Safeway Stores, Inc. Plans to Open A Small-Format 'the market by Vons' Grocery Store in Downtown Los Angeles...
July 8, 2008: Southern California Market Report: Safeway Stores,'the market by Vons' Mass-Mails First Advertising and Promotional Flyer to Vons Club Card Members...July 16, 2008: Former NBA Great Earvin 'Magic' Johnson is Working His Business Magic in Urban, Inner City Neighborhoods; We Offer An Idea For Tesco's Fresh & Easy... June 6, 2008: More on Safeway's 'The Market' Format: 20-Year Food Retailing Industry Vet Offers Observations and Analysis on 'the Market by Vons,' Long Beach, CA
Posted by Fresh & Easy Buzz at 12:17 AM

I'm assuming by great Burd must mean sales per square foot at least equal to Safeway's supermarkets. Although, with the lower overhead of the small stores one might think could have slightly less spsf and still be profitable. The location of the Long Beach the market probably isn't the best test. The downtown L.A. and San Jose locations would seem much better in my opinion.