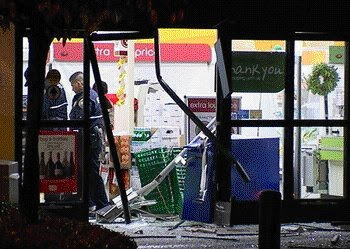 Thieves smashed the front window of the Chula Vista, California Fresh & Easy store before dawn this morning, making off with $32,000 from the store's ATM machine. [Photo credit: Albert Johnson - SignOnSanDiego.]

Two thieves clad in black clothing pulled a heist early this morning at the Fresh & Easy Neighborhood Market store at 865 East H. Street in Chula Vista, California, making off with $32,000 from an ATM machine inside the grocery and fresh foods market, according to a report today in the San Diego Union newspaper, which Fresh & Easy Buzz verified with the Chula Vista Police Department.

'The two men stepped out of the truck and smashed the glass doors with a rock, Heinz said. They wrapped a chain around the ATM and dragged it into the parking lot. They ripped off the machine's cover and took out the container where the money is stored, according to the story.'

The two thieves were dressed in black, wore masks, gloves and hooded sweatshirts, according to the surveillance video which captured the early morning caper.

You can read the full report from the San Diego Union here.

Today's successful early morning heist at the Chula Vista Fresh & Easy, in which the thieves smashed the store's front window in order to gain access to the ATM machine, isn't the first time such a robbery was attempted in recent times.

As we reported in this story [News Report: Fresh & Easy Store ATM Machine 'To Go' is a 'No Go' For Burglars] on October 30, four robbers using a very similar method to that of the Chula Vista thieves attempted to grab the ATM machine from inside a Fresh & Easy grocery and fresh foods market in San Diego, California's Point Loma district. Chula Vista is located just south of San Diego.

Tape from the surveillance camera at that Fresh & Easy market on Catalina Boulevard near Talbot Street in the Roseville-Fleetridge neighborhood in Point Loma showed four people shattering the store's glass front door, entering the store, and once inside attaching a huge cable around the ATM machine, San Diego Police Sgt. Kerry Tom said at the time of the October 30, 2008 attempted heist.

Unlike the robbers this morning at the Chula Vista Fresh & Easy though, those four thieves at the Point Loma store in October failed in their objective to grab the ATM machine.

As an example, in that attempted October 30 ATM heist, once the cable was affixed to the cash machine inside the Point Loma Fresh & Easy store, the burglars attached the other end of the cable to a stolen Chevy Suburban sitting out front. They then took off in an attempt to drag the ATM machine down the street. But instead of getting away with the entire cash machine, the robbers pulled only the cover off, leaving the rest of the ATM machine (and all the cash inside it) still inside the store.

San Diego police found the Chevy Suburban abandoned down the street as part of their investigation of the failed ATM heist at that Point Loma area Fresh & Easy.

Could the robbers who got away with the $32,000 from the Chula Vista Fresh & Easy market early this morning be two of the four who failed in their attempt to boost the Point Loma store cash machine a couple months ago? The thieves' MO and the geographical closeness of the two stores suggest it's possible.
Posted by Fresh & Easy Buzz at 4:18 PM