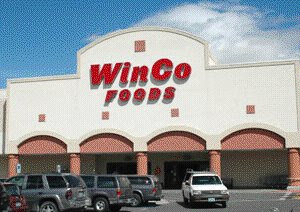 Earlier this year, Fresh & Easy Buzz reported that Idaho-based, employee-owned discount supermarket chain Winco Foods had commercial real estate agents who specialize in retail food store locations scouting the Western United States, including in California and Nevada, which are two of the three markets where Tesco has its Fresh & Easy stores (the third is Arizona), for potential locations for the chain to open new stores at.

The Western USA-focused supermarket chain, which bills itself as "the supermarket low price leader," has decided on a few of those locations, which include sites in California and Nevada, and will start building new discount supermarkets at the locations next year, Fresh & Easy Buzz has learned.

Additionally, Winco is currently searching aggressively for potential new store sites in Central (Valley) and Northern California, and Northern Nevada, three regions it plans to make a major push in next year. The retailer, which currently has a handful of stores in the Central Valley and Northern California, is looking for new store sites in the Fresno area, in the Northern San Joaquin Valley (Modesto-Stockton region), in Metro Sacramento, and in the San Francisco Bay Area.

Winco has a huge 700,000 square foot distribution center in Modesto, California, one of three it operates in the west, that serves its California and Nevada stores. The facility has considerable room to support many more new supermarkets. It's other two distribution centers are located in Oregon.

Winco, which currently operates 64 of its mega-discount supermarkets in five western states --Idaho, Washington, Oregon, Nevada and California -- also is looking for new store sites in Southern California and Southern Nevada (where it doesn't have any stores opened to date), although not as aggressively as it is looking in the Central Valley, Northern California and Northern Nevada. Winco currently has 27 of its 64 stores located in California. The rest are split between Idaho, Oregon, Washington and Northern Nevada, where it currently operates just one supermarket in Reno. All of the Winco stores stay open 24 hours a day. 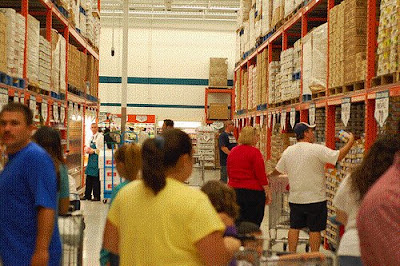 Inside a Winco supermarket above. The design is utilitarian and no frills. The focus on low prices. The supermarkets do have in-store departments like fresh bakery and deli though, as well as other special features, such as huge bulk foods departments.

The 64 Winco stores, which operate on a deep-discount pricing model and are fairly no frills, are extremely high volume units. For example, the chain had annual gross sales of $3.5 billion (with about 56-57 stores) in its last fiscal year. Mike Read, Winco's vice president of legal and public affairs, says the retailer is estimating it will have sales of about $4 billion in its current fiscal year, which ends in March, 2009. That's lots of gross sales for 64 supermarkets, even though they average about 95,000 square feet each in size.

The Winco Foods' stores in Northern California's Central Valley are performing particularly well because of the deep-discount, low price format.

Average incomes are lower in the Central Valley than in the Bay Area and Southern California, for example.

Additionally, the region, from Bakersfield south to Sacramento north, has been among the hardest hit parts of the state by the housing foreclosure crisis and resulting unemployment.

For example, unemployment in the Fresno region is at a bit over 10%; its 13% in nearby Merced County; 12.3% in Stanislaus County, over 11% in San Joaquin County; and about 10% in the Sacramento Metro region, according to the most recent figures released by the California Employment Development Department. By contrast, overall unemployment in California is at 8.4% , the third highest in the nation after number one Michigan (at 13%) and number two Hawaii, as of November, 2008. Notice how Merced and Stanislaus Counties have just as high (Merced) and near as high (Stanislaus) of an unemployment rate as does Michigan, for example, demonstrating the poor economy in the valley.

As a result of the poor economy in the region in general but especially so in this serious economic recession, consumers are flocking to deep discount supermarkets like Winco and Wal-Mart's Supercenters, where they can buy more food and groceries for their dollar. Wal-Mart has few Supercenters in most parts of the Central Valley and Northern California though, something it is working on changing, so Winco is also benefiting from the lack of competition from Wal-Mart in numerous parts of the Central Valley and Northern California where the retailer has few or no stores.

Winco could open as many as five -to- six of its average 95,000 square foot mega-supermarkets in the Central Valley and Northern California (including Northern Nevada) in 2009, Fresh & Easy Buzz has learned. That's a total of about 550,000 new square feet of food and grocery retailing space in the regions. To put that in perspective, Tesco's Fresh & Easy combination grocery and fresh foods markets average about 10,000 -to- 13,000 square feet. It would take about 50 Fresh & Easy stores (using 11,000 square feet as an average store size) to equal that same amount of retail square footage.

Although Tesco's Fresh & Easy has postponed opening its stores in Northern California, the grocery chain has nearly 50 of its small-format, convenience-oriented combination grocery and fresh foods everyday low-priced format markets in the pipeline (in various stages of development from near-completed to recently acquired sites) in Northern California.

The grocery chain also recently opened the first two of a thus far planned five Fresh & Easy markets in Bakersfield, in the south Central Valley. It has eight stores planned for the Fresno region thus far, along with two in Modesto -- all valley regions -- as well as 40-plus stores in the Sacramento/Vacaville market region and in the San Francisco Bay Area combined. 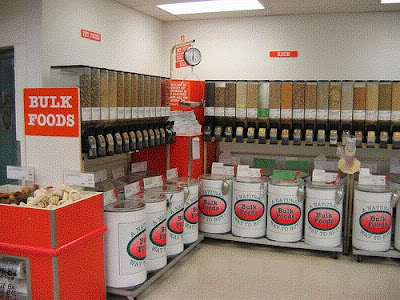 One of the many in-store departments in the mega-Winco supermarkets are its 'old-fashion' bulk foods departments. The huge departments feature nearly every kind of basic food ingredient, from flours to oats, along with bulk snacks, dried fruits and many other items. The bargain-priced basic items like flours, cereals and other unpackaged ingredient items are selling well in the current recession as shoppers are looking to save a buck wherever and however they can.

With Winco making its aggressive push in the Central Valley and Northern California, this adds an additional layer of competitive thrust to what is already a very competitive market that Fresh & Easy will be entering, at least we assume with some stores opening in 2009.

Winco comes in among the lowest-priced of all food and grocery retailers in California and the others Western U.S. states where it has its stores. And like Tesco's Fresh & Easy, it is a non-union operation, unlike Safeway, Kroger-owned Ralph's and pretty much all of the other major supermarket chains in California and Nevada are. Wal-Mart, Target and Trader Joe's are non-union as well.

The Idaho-based supermarket chain, which has 12,000 employees who all own shares in the company, could become a major sub-regional force in California and Nevada over the next two or three years as it adds a number of its new mega-discount supermarkets to its store count in the two states. According to its sales and income growth, it's currently doing well in the recession rather than struggling, which is why its planning aggressive new store growth for 2009.
Posted by Fresh & Easy Buzz at 7:04 PM

I would love to have a Winco in the Bay area. Currently the closest Winco to me is in Eureka, which is 2 1/2 hours away. I still make that commute once a month for the savings, but I would love it to be a bit closer.
Winco Lover...

We have a WinCo here in Longview,WA. It is great!! The only problem we have is there is no why to price & compare with other stores!! Like we get weekly adds on line, Then shop for what we need according to coupons & sales!! Question is why does WinCo not have store adds??
I think it could help there business a lot to at least have weekly add on line!!

Thank you for letting me say what I needed to say!!
Longview
WinCo shopper

I purchased A pint of strawberries yesterday afternoon (have receipt) started to clean them this morning and all of the berries in the lower part of container were very molded. Called store to ask about returning and was told that they don't usually exchange or refund produce. Talked mananger and was told that they would exchange them?!!I am not sure I want more. Should really change your exchange and return policy on bad product. This happened at the Apple Valley store in Ca. Store #0065.Not sure I will be shopping at Winco in the future.

PLEASE COME EAST!!! WOULD LOVE YOU IN FLORIDA

Open more Wincos in the S.F. Bay Area! Thanks.

I live in Redding, CA and we are fortunate to have a Winco Foods close by. When my family comes to visit from the North bay area in CA, they love to shop there. They are hoping for a Winco to open in the Santa Rosa or Petaluma area. Some of their friends are hoping for one also.

Another area in dire need of a major supermarket is in Lake county California. One of my family members has to travel 30 min. once a month to shop. Anything needed during the month, she is forced to shop at a store with very high prices.