Recession Economics: U.S. Economy Worsens; Will Get Even Worse Before Gets Better 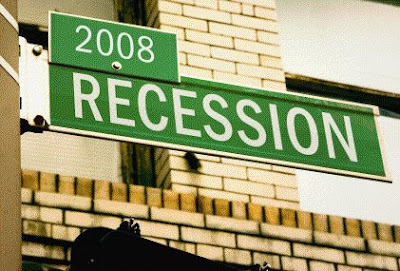 Recession Street USA.
The U.S. economy is going to get worse before it gets better, as we've been saying in Fresh & Easy Buzz for months. President-elect Barack Obama made this very same comment two weeks ago during a news conference in Chicago, Illinois.

Now, the U.S. government is reporting this morning that consumer prices fell the most on record in November and builders broke ground on the fewest new homes in half a century, signaling a deepening of the current U.S. recession.

You can read further at the following links:

Meanwhile, it's suspected the U.S. Federal Reserve will today cut the key target interest rate for overnight lending, which is the benchmark rate, to near zero, 0.5%. [More here: Dollar Declines to Two-Month Low Before Fed’s Rate Decision]

In a news conference this morning, President-elect Barack Obama, asked about the Fed's likely decision to cut the key rate to near zero said: "It's not prudent for an incoming President to question the Fed's decision. What I will say though is the Federal Reserve is running out of ammunition to fight the recession (once at 0.5% all the Fed can do is lower the rate next to zero), which is why our economic stimulus plan when we take office becomes even more important," to implement. [Read more about the Obama plan here: Obama calls for broad strategy to fight recession.]

The U.S. dollar weakened beyond $1.38 per Euro for the first time in two months today amid the speculation the Fed will cut the target rate for overnight lending to near zero today.

That could offer a ray of hope for U.S. exporters. However, with the recession and financial crisis being global, demand for U.S. goods has dropped significantly, as has the demand for goods exported into the U.S. A bright spot though has been for agriculture exportation, particularly U.S. tree crops and some commodities.

If the Fed cuts the key rate today as expected, it will do little for both Wall-Street and Main Street, according to most economists, who say the current recession appears to be much more severe that can be managed by the Fed with its interest rate-cutting tool kit, which is almost empty.

Instead, everyone from Wall Street and Main Street, from corporate America to small business and consumers, is waiting for 'Obamanomics,' the huge economic stimulus package the President-elect wants to implement just days after taking office on January 20, 2009.

The stimulus amount seems to be growing by the day. Initial talk was something on the order of about $300 billion. That stimulus estimate was quickly pushed aside for suggestions it needs to be in at least the $500 billion range in order to have any impact on the going to hell in a handbasket U.S. economy.

In the last couple weeks, many in Washington, D.C., along with a number of economists, have started mentioning numbers like a one trillion dollar stimulus package. We suspect with today's worsening economic news, along with what's suspected to be even higher unemployment numbers for December, talk of a near-trillion dollar stimulus package will increase. in the days and weeks ahead.
Posted by Fresh & Easy Buzz at 10:02 AM