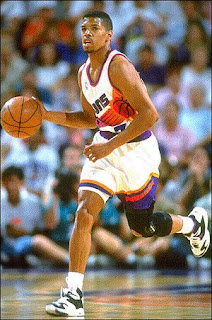 Former NBA basketball star, and Sacramento, California native, Kevin Johnson is the driving force behind bringing one of the 19 Tesco Fresh & Easy Neighborhood Markets we recently reported are coming to the region, to the city of Sacramento's Oak Park neighborhood.

And, that's not all: yesterday, the former ex-Phoenix Suns' guard announced he is running for Mayor of Sacramento, challenging current, three-term incumbent Mayor Heather Fargo, who last week joined Tesco Fresh & Easy Neighborhood Market CEO Tim Mason at a press conference in front of a future Fresh & Easy grocery store in Sacramento, to announce the retailer's plans to enter the Sacramento market with 19 stores, seven of which will be in the capital city.
Johnson made his announcement in a press conference at the Guild Theatre in Sacramento's low-income Oak Park neighborhood, where the 42 year-old basketball star was raised.
Echoing U.S. Democratic Presidential candidate Barack Obama's call for "change," Johnson said: "We need a change in the city. As I went out the last month and talked to people around the city, folks have said to me they believe city government is nonresponsive, tired, uninspired and bureaucratic. they want something different in Sacramento. (They're) clamoring for change."
It is in this very Oak Park neighborhood, Johnson's boyhood home, where he is bringing a Fresh & Easy grocery store. Since retiring from the NBA and moving back home to Sacramento, the former NBA star has been a real estate developer, including establishing a non-profit community development corporation called St. Hope.
Johnson devotes a great deal of his time to his St. Hope non-profit organization. Among its projects has been transforming the failing Sacramento High School into a successful Charter School.
The St. Hope community development organization also has developed the '40 Acres Art Gallery and Cultural Center' in the low-income Oak Park neighborhood. The cultural center includes residential lofts, a bookstore and a Starbucks cafe.
Oak Park is one of the city's oldest neighborhoods. It's been seeing a renaissance in recent years, as projects such as those by Johnson's organization, as well as those by private developers, are revitalizing it. The neighborhood also has become popular in recent years because it's one of the most affordable in the city in terms of housing. Numerous young professionals have moved into the neighborhood, buying old houses and remodeling them, which is changing the area's demographics somewhat, although it's still low-income.
Johnson owns about 37 properties in the Oak Park neighborhood. He recently had to issue a public apology regarding the condition of a number of these properties, when the Sacramento Bee, which is the region's major daily newspaper, ran a story reporting that half of his properties had been sighted by the city for code violations over a 10-year period. The violations included vacant lots being fallow, along with garbage being allowed to fill the empty lots.
Johnson responded quickly to the Bee article however, and has moved to clean up all the lots in the neighborhood, according to the Sacramento planning department, which enforces the city's residential and commercial property codes.
Johnson's latest project is bringing one of the 19 Sacramento area Fresh & Easy grocery markets to the commercial core in the Oak Park neighborhood, on a piece of property he owns there. The neighborhood is underserved by grocery stores, especially those that offer a selection of everyday groceries at reasonable prices, along with fresh foods like produce and meats. Johnson --in partnership with Tesco's Fresh & Easy--aims to address this lack of a grocery store in the place where he was raised.
One of Tesco's strategies with its U.S. Fresh & Easy small-format, convenience-oriented grocery stores is to locate stores in what it calls "food deserts," neighborhoods that currently are underserved by grocery stores. Oak Park fits that strategy--and with the NBA All Star, and perhaps future Sacramento mayor--behind the project the location could be gold for Fresh & Easy.
When neighborhood residents and community groups heard the news about a month ago that Johnson was bringing a Fresh & Easy Neighborhood Market to the neighborhood, the response was almost universally positive. Neighborhood groups had been trying to bring a grocery store that fits the bill of offering basic groceries along with lots of fresh foods to the neighborhood for a number of years. The Oak Park grocery market is scheduled to open in 2009, probably about mid-year.
If Johnson is elected mayor, Tesco's U.S. Fresh & Easy Neighborhood Market venture just might have an important friend at Sacramento City Hall.
Posted by Fresh & Easy Buzz at 12:26 PM