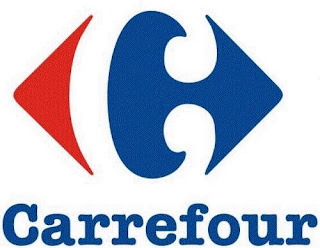 The small-format stores, which Carrefour says will be called Carrefour Contact, will begin in a trial of a few stores to start, a company spokesperson told Fresh & Easy Buzz.

Carrefour also is considering a similar small-format, convenience-style food and grocery format designed specifically for cities. Those stores would be called Carrefour City, the retailer told Fresh & Easy Buzz. Although a final decision on Carrefour City hasn't been made, we believe the global retailer plans to go forward with the format, so that it has matching rural and urban small-format, convenience-style chains.

Carrefour's current CEO, Jose Luis Duran, is leaving the French chain. His replacement is Lars Olofsson, who is a veteran marketing veteran of the giant global food company Nestle. Olofsson takes over as Carrefour's CEO on January 1, 2009. [Wal-Mart CEO Lee Scott is retiring at the end of January, 2009 That will leave Tesco's Sir Terry Leahy as the only incumbent CEO of the global "Big Three" retailers.]

Oloffsson is a brand marketer and not a retailer. Therefore, it will be interesting to see the direction he takes Carrefour Group, which is second only to Wal-Mart Stores, Inc. in annual global sales. United Kingdom-based Tesco is number three globally in annual sales.

One of the directions incoming CEO Oloffson will be taking Carrefour is into the small-format, convenience-style food and grocery retailing format business which in Tesco is a leader in with its Tesco Express stores in the UK and other parts of Europe.

Carrefour Group already operates small small-format stores under the Carrefour banner in markets like Asia. However, the stores are more like neighborhood grocery stores that are basically small-format because such a size store fits the particular geographical location the store is in (like a dense city), unlike the new Carrefour Contact, specifically designed for small towns and villages, and the new Carrefour City, the urban small-format, which are beign specifically designed in the European hybrid grocery market-convenience format tradition.

Carrefour already operates conventional convenience stores under the brands Shopi, 8 a Huit and Proxi. It's likely if the retailer goes forward in a big way with the Carrefour Contact and Carrefour City chains, it will re-brand these stores under those banners.

Carrefour's bread and butter format is the huge hypermarket. Its European Hypermarkets have been losing some market share of late as many European shoppers have been trended towards shopping more at smaller, discount supermarket and particularly at the small-format, hard discount chains like Aldi and Lidl.

Based on our knowledge, Carrefour aims with its small town and city-focused small-format banners to strike sort of a balance between a Tesco Express-style convenience market and the types of stores operated by the European no frills, small-format hard discounters Aldi, Lidl and Netto.

Ironically, this is somewhat what Tesco is attempting to do with its Fresh & Easy chain in the Western U.S. The stores borrow many concepts from the retailer's Tesco Express, but also incorporate some of the no frills aspects of the small-format hard discounters, along with borrowing numerous concepts from the U.S. specialty chain Trader Joe's, which happens to be owned by members of the same family that own the Germany-based Aldi global hard discount chain, which now has nearly 1,000 small-format deep discount stores in the U.S.

One thing we can tell readers that incoming CEO Lars Olofsson, the Nestle brand marketer, plans on doing is to use the Carrefour brand on stores far more than the company has in the past. In that regard it's no surprise the two new small-format banners, Carrefour Contact and Carrefour City, both feature Carrefour in the store names. He also plans to position to position the retail brand strongly around the Carrefour name.

Additionally, the retailer recently re-branded its 1,021 Champion banner stores in Europe under the new name Carrefour Market. This is part of the new strategy to focus on and position the Carrefour brand.

Carrefour's decision to create a separate small-format, convenience-style banner for small towns and another for cities is similar to what the UK Waitrose supermarket chain did earlier this year. Waitrose developed, and has started opening the first stores, first a small town and village format small food and grocery market with a convenient focus, and then developed a second format for cities. CEO Mark Price says Waitrose did so in order to address rural demographics and consumers, and urban demographics and consumers, in the UK individually or specifically.

Tesco's Tesco Express small-format, convenience-style markets in the UK however don't make that distinction. To a large degree that's because the focus of locating the Tesco Express stores thus far has mostly been in cities and suburbs, rather than small towns and villages, in the UK.

The same is the case with its Fresh & Easy small-format, convenience-oriented grocery and fresh foods markets in the Western U.S. Tesco has only one Fresh & Easy format and it is used in urban areas, suburbs and small towns without differentiation or customization of the format/stores.

Carrefour does not operate stores in the UK, so there won't be any small-format retailing battles between the retailer and Tesco on Tesco's home turf.

The explanation Carrefour gave us as to its logic for creating two separate formats -- one for small towns and another for the cities, as well as giving them separate names -- is basically the same logic nad reason as Waitrose's, the desire to address the rural consumer base and urban consumer base individually or specifically with the formats. As two different segments that have similarities but also differences, basically.

Carrefour's jumping into the small-format, hybrid grocery market-convenience store business in Europe demonstrates the popularity of the concept in primarily Western Europe but also increasingly in Eastern Europe as well.

Tesco, Sainsbury's, Waitrose, Marks & Spencer and numerous other retailers have such chains. (We differentiate these hybrids from the hard discounters like Aldi and Lidl.) Now add ginat Carrefour to the list with its two new formats.

In contrast, the format isn't much of anything in the U.S. Tesco is trying to make it so with Fresh & Easy but so far the reception from consumers in tepid.

Wal-Mart is testing its version, Marketside, but has only opened four stores and is taking it slow. Safeway Stores, Inc. ("the market by Vons") and Supervalu, Inc., ("Urban Fresh by Jewel") two of the "Big Three" U.S. supermarket chains (the other being Kroger Co.) have both developed their own small-format, convenience-oriented markets but are taking it slow as well. Both chains have opened one store in their small-formats thus far.

Thus far in the U.S., from a chain perspective, it's the small-format, hard discount chains that are doing well and growing. Most specifically are Supervalue, Inc.'s Sav-A-Lot chain, which operates about 1,200 stores in the U.S., and Aldi USA, the American division of Germany's Aldi International, which operates nearly 1,000 Aldi stores in the U.S. and is growing into new markets. Aldi just opened it's first stores in Florida, for example, and is planning to enter the Texas market in early 2009.

Next up: Look for Wal-Mart-owned Asda, the number two chain in the United Kingdom after Tesco, to announce fairly early in 2009 that it will open its own small-format, convenience-oriented food and grocery markets in Britain.
Posted by Fresh & Easy Buzz at 4:42 PM