Drug Chain Walgreens to Slow New Store Growth; Despite Tesco Fresh & Easy's Recent Announcement to Do Similar, We Suggest An Analogy is Misplaced 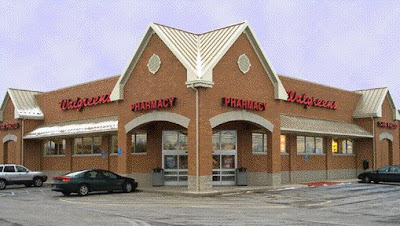 Mega-drug store chain Walgreens said today its first quarter, fiscal 2009 profit fell by 10% despite a 7% increase in revenue (which is record first quarter sales for the chain), falling short of Wall Street analysts' projections. The drug store chain attributed the substantial drop in profits primarily to expenses related to its opening of new stores.

As a response to its drop in income for the quarter, Walgreens today said it plans to slow the opening of new stores to save $500 million. It said doing so is a response to the current recession.

The drug chain says its selling and general expenses grew 9% in the quarter as it opened 212 new stores, and profit margins dipped due to greater expense provisions.

The company said prescriptions filled in its stores grew 3.7 percent during the quarter, while industry data has showed falling prescription levels for its rivals. In total, a significant 66% (which is both good and bad) of Walgreen's quarterly revenue came from prescription sales.

As a result of the new store opening expenses and the current recession, Walgreens president and chief operating officer Gregory Wasson said in a statement today that the drug chain will in fiscal 2010 slow its organic store openings to a rate of 4.5 to 5 percent, with growth of 2.5 percent to 3 percent in fiscal 2011. In July of this year the company said it would slow the pace of store openings down to 5 percent in 2011, from 8 percent. The reductions are expected to save the company a total of $1 billion in annual spending, according to Wasson. Organic store openings means opening new stores but not including acquisitions. We doubt Walgreens is planning any acquisitions in the near-term.

Walgreens currently operates 6,630 drugstores in 49 states. The chain had sales of $59 billion in the 2008 fiscal year. It said today plans to increase its store count by 475 stores in fiscal 2009, which ends in August of next year. At its annual investors day conference in October Walgreens announced s number of new strategies for 2009, which you can read about here.

Just a few months ago, Walgreen's made a counter-bid to acquire the Northern California-based Long's Drug chain following a deal made between Long's and the CVS drug store chain in which CVS said it would acquire Long's. Not too long after announcing it would make a counter-bid against CVS for Long's, Walgreens announced it has decided to drop that offer and plan. CVS is in the process of acquiring Long's.

That decision by Walgreen's was a good one in our analysis in terms of its current challenges because if it did buy Long's it would currently be having an even tougher time making its revenue and income keep pace with its expenses. That decision however, or the initial one to make the counter-bid for Long's, apparently wasn't a good one for now-former Walgreens' CEO Jeffrey Rein, who resigned on October 10, just two days after the Illinois-based drug chain withdrew its counter-offer to acquire Long's. Walgreens said today it plans to name a new CEO in early 2009.

As we reported earlier today, Walgreens has made three new executive hires, which it confirmed to Fresh & Easy Buzz today. Those new hires include former Tesco Fresh & Easy Neighborhood Market co-vice president of operations Brian Pugh, who left Fresh & Easy in September of this year.

Pugh has been named to the new position of vice president of store development at Walgreens. In that position he is charged with further developing the food, grocery, household goods and related categories for the drug chain.

Walgreens v. Tesco's Fresh & Easy: A non-valid analogy -- if made

In today's piece about Brian Pugh's hire by Walgreens, we commented that his new position at the drug chain has occupational and operational synergies for him personally, regarding his previous position at Fresh & Easy.

Many may want to make an analogy between Tesco Fresh & Easy Neighborhood Market USA's recent announcement that it's cutting back its opening of new stores and postponing its Northern California market launch and today's announcement from Walgreens that it also is doing so.

However, other than the fact doing so will help both chains to conserve cash during the current economic recession, it's our analysis that the comparisons and analogy stop there for a number of reasons.

First, Walgreens is a drug chain and Fresh & Easy is a food and grocery chain. Drug chains are hurting far more from the recession than grocery chains are. In fact, chains that offer food at a discount such as Wal-Mart, Aldi USA and some others are doing well in this economic downturn, as shoppers shop where they perceive than can get the best deals.

Tesco's Fresh & Easy is positioned as a no frills, everyday low price format. As a result it should be doing much better than it is in the current recession, just like similar positioned food and grocery retailers are doing. It isn't, which is primarily why it is scaling-back its store expansion program at present.

Drug chains like Walgreens sell much more recessionary-influenced (negative) products than grocery stores do. These products includes prescription drugs and health and beauty care category items, which make up the majority of Walgreens' overall sales. (Prescription drug sales alone are 66% of Walgreens' total sales.) The stores sell some food and grocery items but they comprise only a small share of total store sales.

Second, unlike Walgreens -- which in addition to being a drug rather than food and grocery chain is a mature chain in terms of store count and market region penetration in the U.S.; it operates 6,630 stores in 49 states and has been opening hundreds of new stores a year for the past few years -- Tesco's Fresh & Easy is a start-up grocery chain with only 104 stores at present, which is nearly 200 less than the company originally said it would have open by now.

In fact, Walgreens is in our analysis overstored in some regions of the U.S., which is in part why we think it has decided to focus (the Brian Pugh hire) more on developing food, grocery and related category sales in its existing and new stores. The time is soon coming to an end for the drug chain when it can count on significantly growing its sales by opening new stores. At some point -- and we think having 6,630 stores in the U.S with hundreds more in the pipeline. is getting near that point -- a chain reaches the point where new store growth can't be its primary sales driver (and profit driver either) because the stores in most market regions begin to cannibalize sales because they are just to close to one another geographically. We think Walgreens is almost at that point.

Therefore, developing organic, same store sales through consumables and related category developments, along with perhaps some new format development like the drug chain is looking at by opening smaller footprint stores, is a logical development in our analysis, as is going international, which is something Walgreens has no plans to do at present, as far as we are awre.

Lastly, unlike the mature Walgreens, in addition to its being a less recessionary format and being a mere start-up with only a shade over 100 stores currently, Tesco's Fresh & Easy hasn't even gone beyond three market regions --Southern California, Southern Nevada and Metropolitan Phoenix, Arizona -- as of yet with its small-format, convenience-oriented combination grocery and fresh foods markets. As a result, cutting-back its new store opening program, which includes postponing for at least the second time this year its entry into the Northern California market, even in the current recession isn't a good overall sign for the retailer.

The reason we say this is because the logic for say postponing going into Northern California, where Tesco has leases signed on nearly 50 store sites and is in the process of remodeling and building stores at many of those locations, is that when things get better with the economy it will make more sense to open those stores.

But since United Kingdom-based Tesco is paying monthly leases, as well as putting out cash for the construction costs on many of these near 50 stores, we question the real reasons for postponing the launch. Our analysis is its not so much the economic recession, which ironically finds Northern California as one of the best-off regions in the U.S. although it too is hurting, but rather part of an overall crisis in confidence within Tesco as to the performance of Fresh & Easy to date, along with a bold move to conserve cash. Why else make a decision to conserve cash by cutting back on new store openings despite the fact that with a shade over 100 stores operating at present the chain is only at about one third of where Tesco said it would be as recently as late last year by this point in time? Tesco also is slowing the pace of new store openings in its three existing markets in addition to postponing the openings of its Northern California region stores.

From a potential-for-success standpoint, it's probably wise Tesco has put the brakes on its rapid new store growth with Fresh & Easy based on current chain performance and confidence levels. However in terms of its investment in Fresh & Easy, doing so does play havoc with the company's sales and profit targets for Fresh & Easy Neighborhood Market USA, which is something Tesco analysts in London and on Wall Street will soon start pointing out much more regularly we believe.