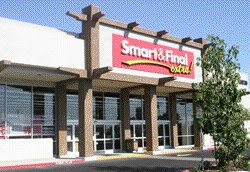 Pictured above: The Smart & Final 'Extra' food and grocery market in the southern California city of Bellflower.

Smart & Final currently operates eight "Extra" stores - six in Southern California and two in Northern California's Bay Area. The stores are nearly double the size of the retailer's non-membership warehouse stores -- 25,000 -to- 35,000 square feet, compared to about 17,000 -to-18,000 square feet for the traditional non-membership warehouse-style stores.

The "Extra" stores also carry about 4,500 more items -- including many more in single-unit sizes -- than Smart & Final's non-membership warehouse-style stores do, which cater to small businesses and restaurants, as well as individual consumers.

The "Extra" stores' target customer is the individual supermarket and grocery store consumer rather than the institutional customer.

In addition, the "Extra" format puts a greater emphasis on fresh foods, including produce (the fresh produce departments are in the 4,000 -to- 5,000 square foot range), meats, deli and prepared foods, compared to the non-membership Smart & Final warehouse-type stores.

The "Extra" Stores are designed to be more appealing to shoppers than Smart & Final's warehouse stores are. This includes enhanced interior packages and colors, more traditional style shelving, improved and more colorful in-store signage and more shopper-appealing merchandising and displays. They are a hybrid but look more like a traditional supermarket in design than they do a traditional warehouse store.

Smart & Final appears pleased enough with the performance of the current eight stores that it's planning to open a number of new "Extra" format stores in 2009 in Southern California, Northern California, and in other states in the Western USA where it operates its 242 non-membership warehouse stores in. Those states are, in addition to California: Oregon, Washington, Arizona, Nevada and Idaho. The retailer also operates stores in northern Mexico.

Look possibly for an "Extra" format test store in Arizona and one in Nevada in 2009 -- and likely additional stores in both states before next year is out. These are two states where Smart & Final operates but has yet to open any of the new format stores. Tesco's about 104 stores are located in Southern California, Southern Nevada and in the Pnoenix, Arizona Metropolitan region.

In the first half of 2009 Smart & Final will likely open as many as five new "Extra" food and grocery stores in Southern California. In addition, the retailer will likely open at least one new "Extra" store in Northern California's San Francisco Bay Area, in the city of Brentwood, and another in the Central Valley city of Stockton, which is about 35 miles from Brentwood.

We've also have learned Smart & Final is looking for additional locations for 2009 in Southern California and in Northern California, including in the Bay Area and the Sacramento region.

The retailer also has plans to convert some of its existing Smart & Final banner non-membership warehouse format stores into Extra stores in 2009. Its likely some of these stores could be in Arizona and Nevada, along with in California, in addition to the company converting some its traditional non-membership warehouse format stores in Oregon, Washington and Idaho into the new format on a case-by-case basis.

We believe Smart & Final could open as many as 25-35 new "Extra" stores, many of them conversions of existing non-membership warehouse format stores, mostly in California, but also in Arizona, Nevada and the other western states, in 2009.

In addition to its five month old "Extra" format, the first store of which opened in August of this year in Southern California, Smart & Final Stores owns the Henry's Farmers Market natural and organic foods stores in Southern California and the Sun Harvest Markets natural foods stores in Texas, which it operates as a separate division from Smart & Final, with its own headquarters in San Diego, but also has integrated into the company where synergies makes sense. There are currently 36 total stores, about 26 Henry's banner stores (all located in Southern California) and about 10 Sun Harvest banner natural and organic foods markets, which are all located in Texas.

The Henry's and Sun Harvest markets didn't fit into Whole Foods Market's strategic plans for Wild Oats, plus it wanted to raise some cash to aid in its acquisition, so the natural foods grocery chain sold the stores to Smart & Final, which itself is owned by investment firm Apollo Management LLC, which bought Smart & Final in May, 2007. Apollo/Smart & Final acquired Henry's and Sun Harvest from Whole Foods just a couple months later.

The Henry's Farmers Market and Sun Harvest stores were rather run down by the time Wild Oats sold to Whole Foods. However, since acquiring the stores from Whole Foods last year, Smart & Final has invested money in them and improved them dramatically, focusing the stores back into a more focused natural and organic foods format and vastly improving how the stores look, along with their merchandising, product selection and pricing. Smart & Final is in the processes of remodeling a number of the Henry's and Sun Harvest stores and plans to open a few new Henry's Farmers Market units in Southern California next year, according to its Web site.

The size, which is about twice as big as a Tesco Fresh & Easy Neighborhood market store which average 10,000 -to- 13,000 square feet, allows them to be used in numerous settings, from suburban to urban.

Like Fresh & Easy they also offer a limited sku count, although the "Extra" stores carry more items than a Fresh & Easy store does.

Also similar to a Fresh & Easy, the "Extra" stores put an emphasis on offering everyday low prices and feature fresh foods as well as shelf-stable groceries.

Another similarity: United Kingdon-based Tesco, which owns and operates Southern California-based Fresh & Easy Neighborhood Market USA, has for many years operated as one of its numerous retail formats in the UK a banner and format named -- "Tesco Extra."

With the development of its five month old Smart & Final "Extra" format and the retailer's new plans to grow the number of stores from the eight it now operates in California into many more -- not just in California but elsewhere in the west where it operates stores -- including Nevada and Arizona where in addition to Southern California Tesco's Fresh & Easy has its 104 combination fresh food and grocery markets -- Smart & Final is adding yet another competitive food and grocery retailing format, element and set of stores into the already super-competitive Western USA food and grocery retailing industry mix.

Just when the pundits say the market has reached maturity, more new formats and stores come along.

Despite the economic recession, which we think will get worse before it gets better and which we believe will last for all of next year, there will continue to be new store -- and format -- development in the Western U.S., albeit at a much slower pace than in 2007 and 2008, in our analysis.

This increased competition from existing and new format players like Smart & Final's "Extra," combined with the economic recession, could result in some shaking-out among the retail players in California, Nevada and Arizona, leading to some store closings as well as diminished sales and incomes for those food and grocery retailers who don't adapt, or aren't sufficiently capitalized to weather the storm.
Posted by Fresh & Easy Buzz at 1:05 AM

Well, I've been to S&F twice, and it's not in the same realm as F&E. You couldn't get much further apart as far as what's for sale. You don't buy a candy bar at Smart & Final. You buy a box of candy bars similar to what they stock the racks with in full-sized supermarkets. There's a lot of store/office/restaurant bulk sized items that aren't appropriate for a home unless you have a large family.

If anything, compare what they're doing to Costco/Sam's as similar to what F&E is doing to supermarkets.

The stores we are writing about in the piece are Smart & Final's new "Extra" format stores. There are only 6 of the stores in Southern CA and 2 in Northern CA.

They are different than the traditional Smart & Final non-membership warehouse-type store you are talking about -- we point that out a number of times in the story.

Doesn't sound like you've been in one of the new Extra stores as what you describe is the traditional Smart & Final stores.

The "Extra" stores have lots of single-package items, as we mention.

I kinda like the S&FE! I've been to in Encinitas. I find it a bit more appealing than F&E visually, although F&E has better store-brand products.

Now that I think about it, they actually look quite similar. Look at the price tags, they even look like they are in the same font!