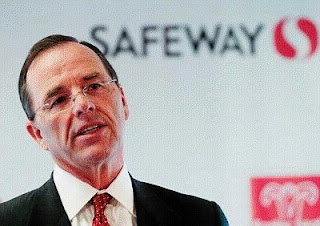 Pleasanton, California (San Francisco Bay Area)-based Safeway Stores, Inc., which operates about 1,750 supermarkets under various banners in the U.S. and Canada, including over 500 supermarkets under the Safeway and Vons banners in California, Nevada and Arizona where Tesco's Fresh & Easy Neighborhood Market has its stores, has created a new real estate development division and business that has so far reviewed 36 projects for possible development and is working actively on a handful of the projects, company CEO Steve Burd (picture at top) told analysts during an investor conference last Thursday at Safeway headquarters.

"The opportunities [to develop undervalued real estate] are pretty extraordinary right now for people who can step up to the table", Burd said at the meeting. In other words, Safeway sees the current economic downtown as an opportunity in the commercial real estate space for the company.

The Safeway CEO offered an example of the type of projects Safeway is reviewing. For example, one project "might be" Safeway developing a shopping center where it operates a grocery store, and leasing or selling the retail space surrounding the store. Safeway Stores, Inc. would retain ownership of its grocery store in that center, according to Burd.

The new commercial real estate development business is part of Safeway's expansion beyond its core food and grocery retailing business under Burd's leadership as CEO.

Additionally, earlier this year Safeway created a brand marketing and distribution arm in which it is marketing its O' Organics and Eating Right store brand food and grocery products to other retailers and grocery wholesalers in the U.S., as well as globally.

O' Organics has sales in Safeway supermarkets in the U.S. and Canada of about $500 million. Eating Right is approaching that same sales volume. To put that in scale compared to Tesco's Fresh & Easy in the Western U.S., sales at the grocery chain's about 103 grocery markets are currently in the $400 million range, which is about $100 million less than the 2008 sales of Safeway's O' Organics store brand in its supermarkets. That's not a knock on Fresh & Easy -- it's a start up venture. Rather its merely a comparison in scale to on of the big chains it is competing directly against.

France's Carrefour chain, the number two global retailer after Wal-Mart (Tesco is number three globally) already is selling many of the O' Organics branded items in its stores in Asia. Safeway will soon announce additional retailers outside the U.S., along with some in the U.S., that will offer the brand, along with the Eating Right brand, in their stores.

This summer Safeway created a corporate health care subsidiary based on the programs the retailer has implemented within the company that have resulted in substantial health care cost savings for Safeway, which offers health care plans to all of its employees.

Safeway owns lots of real estate, especially in California and elsewhere in the Western USA. The grocery chain also develops lots of real estate by virtue of the fact its supermarkets generally serve as retail anchors in shopping centers. As a result, it makes logical sense for the company to get into the commercial real estate business since the synergies with its core supermarket retailing business are obvious.

As Burd mentioned at the analysts meeting last Thursday, part of the motivation for getting Safeway into the commercial real estate business has to do with the numerous undervalued properties available at present, with the financial crisis and economic recession in full bloom. Additionally, the residential foreclosure crisis has spread significantly into the commercial sector, particularly in the Western U.S., which means there currently are numerous properties on the market at deep discounts.

Big supermarket chains like Safeway, Tesco, and others are at an advantage because the business generates lots of cash flow compared to other types of businesses, as well as compared to other forms of retailing. Therefore this cash flow makes it easier for the big chains to have cash available to invest in areas like commercial property development.

Further, having its own commercial real estate arm offers some real cost savings for Safeway in terms of developing new retail store sites and now in creating new shopping centers in which it can anchor with its supermarkets.
Posted by Fresh & Easy Buzz at 6:10 PM