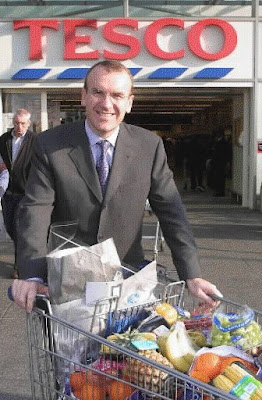 In his speech at the global retail research forum, Mr. Leahy said consumers want to be "green" consumers and buy environmentally-sound products, and that it is the challenge of retailers like Tesco to help them do so.

"If consumers are able to purchase lower-carbon products and services, they will reward the businesses that produce these products. This will encourage competition between businesses [and] stimulate research and development to bring forward even better products," he explained to those attending the forum sponsored by beverage giant Coca-Cola.

In his speech CEO Leahy focused on three key elements of what he said is Tesco's "green" or pro-environment strategy. Those key areas are:

Mr. Leahy emphasised in his speech that the third element of Tesco's "green" strategy is the one in his opinion that will make the most difference in reducing global warming, which he argued he believes is real based on all the research he has seen.

"Consumers account directly and indirectly for 60% of carbon emissions. Get the consumer on side and the task of tackling climate change becomes possible," he said in the speech.

In his speech the Tesco CEO outlined two "green" initiatives the retailer is doing in the United Kingdom, where the chain is based and where it is that nation's number one retailer with a 31% market share. The two initiatives--one designed to reduce the quantity of single-use plastic carrier bags in the stores, and the other designed to reduce carbon outputs--are part of what Mr. Leahy says are the three key elements of Tesco's "green" initiative, as we described above.

CEO Leahy said in his speech that Tesco has saved 2 billion plastic bags by creating incentive programs in its UK stores designed to get shoppers to bring their own reusable bags to the stores. As we reported previously in Fresh & Easy Buzz, Tesco plans on charging shoppers a per-bag fee for the single-use plastic bags in its UK stores as a way to further reduce the quantity of the bags it distributes in its stores in that nation.

Ironically, in the U.S. Tesco only offers free single-use plastic carrier bags in its Fresh & Easy Neighborhood Market grocery stores in Southern California, Nevada and Arizona rather than the choice of paper or plastic like nearly every other food and grocery retailer in the nation does. Most U.S. supermarket retailers believe offering consumers a choice of paper or plastic is one way of reducing the use of the plastic bags, along with selling and promoting reusable bags.

Tesco UK stores don't offer paper grocery sacks either. Fresh & Easy USA does sell reusable canvas shopping tote bags, along with what it calls "bags for life." These reusable bags sell for only 20-cents each and are made out of a plastic-like synthetic material. Fresh & Easy Neighborhood Market offers to replace these bags when they wear out for free, hence the "bags for life" name.

In addressing what some say is a contradiction between being a "green" retailer and a growing one, Mr. Leahy said that's a false choice.

"The choice is not 'green or grow,' said Leahy. "That is a false choice. You can do both - and you must do both. Reducing emissions does not merely fight climate change, it also cuts costs."

Tesco is the first and currently only food and grocery retailer in the world to have introduced carbon labels on the packages of some of its store brand grocery items. Thus far Tesco has only done this in its stores in the UK. The international retailer also is working with its suppliers to have them eventually include carbon labels on their branded products, which is something CEO Leahy says he and Tesco are committed to seeing happen.

In his speech he pledged to roll out carbon labels for each of the 70,000 products carried in Tesco stores, starting with all of the retailer's store brand items. The labels provide shoppers with information such as a particular product's carbon footprint, how many miles it's traveled from where it was manufactured to where it's being sold, and other related data. They are essentially an environmental version of a nutritional label.