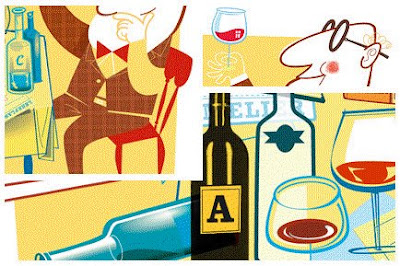 Tesco's Fresh & Easy Neighborhood Market has been conducting a category review and sku rationalization in its wine, craft beers and liquor category, Fresh & Easy Buzz has learned from sources involved in the process. The focus is primarily on wines, which is a key product category for the Fresh & Easy stores.

All of the current 96 Fresh & Easy stores, except two in Southern California we are aware of (Hollywood and Van Nuys), sell wine and craft beers. A number of the combination grocery and fresh foods markets sell hard liquor along with wine and beer. Not all of the units offer the spirits for sale however. The Hollywood and Van Nuys stores don't have permits to sell alcoholic beverages of any kind.

The wine category sku rationalization process is being led by category manager Karen Fletcher, who came to Fresh & Easy Neighborhood Market USA from Tesco in the United Kingdom as part of the start-up team. Ms. Fletcher is a native of Britain.

The category review also comes not to long after Fresh & Easy Neighborhood Market went through a series of changes in its grocery merchandising department, which found former director of grocery Charlotte Maxwell, also a British national, leaving Fresh & Easy corporate headquarters and her position to return to Tesco in the UK to accept a director position at corporate headquarters there, as we've thus far been the only publication to report.

Ms. Maxwell was replaced as Fresh & Easy's corporate director of grocery merchandising by Sean McCurley, who previously was director of fresh foods. That position was equal to Ms. Maxwell's in terms of the company structure. Mr. McCurley also is a British citizen.

As part of the wine category review and sku rationalization, Fresh & Easy is looking at reducing the overall number of skus the stores carry in the category, focusing on fewer items and maximizing total sales per item count, according to our sources. Some slow moving wine skus have already been discontinued.

There also has been some merchandising-related discussion as part of the category review involving flipping the wine and beer aisles towards the store's freezer case sections from their current locations, although our sources said they aren't sure of the current status of this previous discussion.

When Fresh & Easy Neighborhood Market USA was first organized, the wine and beer department was under the grocery department, which is normally the case with food retailing companies. However, sometime later category manager Karen Fletcher requested her category be placed in the fresh department and that she report to Sean McCurley, who ran fresh at the time, rather then Ms. Maxwell, who then was in charge of grocery.

Fresh & Easy's senior corporate directors approved of the change. Following Ms. Maxwell's departure back to Tesco in the UK and Sean McCurley assuming her grocery director position, the wine, beer and spirits category was moved back over to grocery with Ms. Fletcher's blessing, according to our sources.

Wine primarily, but also beer and spirits, is a major focus for Fresh & Easy, as it is internationally for Tesco. Karen Fletcher was brought over to the U.S. to build the category as an integral part of the Fresh & Easy merchandising mix. Part of that strategy includes having numerous proprietary, specialty-blended wines produced for the grocery chain, including numerous wines from Australia. Tesco is among the leading retail buyers of Australian wines in the world.

The wine category hasn't yet been all that Tesco has expected it to be at the Fresh & Easy stores. Our analysis is this has to do with a number of factors, most notably the fact California wines, which Fresh & Easy stores are short on compared to its competitors, are much more popular than foreign wines in California, Nevada and Arizona, where the current 96 Fresh & Easy grocery and fresh foods markets are located.

Even more so, it has to do with the highly competitive nature of wine, beer and spirits retailing in each of these markets. Not only are major supermarkets like Safeway Stores, Inc. major wine retailers in the Western U.S., for example, but there are category killer retailers like Beverages & More and Cost-Plus World Market, along with Trader Joe's and many others (including scores of independents), that have been selling wine in these markets very successfully for decades. These retails know the market, the customer base, and the wine producers almost as much as they know their own family members in many cases.

As a result, Fresh & Easy has far more competition in its Western U.S. markets than say Tesco has in its home market of the UK when it comes to wine retailing.

The wine category product mix at Fresh & Easy also lacks proper regionalization, sub-regionalization and localization. Perhaps this has been recognized and is one of the reasons for the category review and sku rationalization?

Like it has done with its entire product mix, Tesco basically has tried to merchandise its Fresh & Easy stores in many ways like they are British small-format stores (read Tesco Express) in the UK, merely transplanted to the Western U.S. This has resulted in lots of failures, lost sales and missed opportunities.

Additionally, when it comes to the wine category, there arguably isn't a category that it's more important to regionalize, sub-regionalize and localize. Wines that do extremely well in Northern California, for example, often sell poorly in Southern California. The same regional differences hold true in Nevada and Arizona. Wine brands in the U.S. are regional and even sub-regional. What sells well in San Francisco often isn't what sells well just 80 and 90 miles away in the Central Valley cities of Stockton or Modesto, for example.

Further, since Fresh & Easy has so many proprietary brands, wine brands consumers have never heard of, they have had to hope shoppers might merely like the price or how the bottle looks and give them a try. That's a tough way to sell wine, especially in California.

A number of the proprietary Fresh & Easy wines have done well though, particularly its $1.99 a bottle ($2.99 in Nevada and Arizona) Big Kahuna brand, which is a clone of Trader Joe's famous and super-successful "Two Buck Chuck" value-priced wine brand and line. Big Kahuna is an Australian wine. TJ's "Two Buck Chuck," which last year won the top award in the California State Fair Wine Competition, is a California wine. It's produced by Ceres, California-based Bronco Winery.

In terms of the wine category review and sku rationalization, Fresh & Easy needs to add more California wines, sub-regionalize and localize its wine brand and item selection and merchandising program if it wants to be a successful wine retailer in its respective markets, in our analysis.

This is especially true in California, which is a bigger wine sales market than Nevada and Arizona combined are. (Southern California alone and Northern California alone are both respectively even bigger than both states combined. Since California is the major U.S. wine-producing state, as well as one of the top wine regions in the world, consumers are much more familiar with wines then elsewhere in the U.S. The state also has the highest per capita wine consumption in the U.S.

It also follows that the state has the most competitive and generally the best wine retailers in the country.

In fact, in the Central Valley, a good wine retailer also merchandises as many wines from that home region and the nearby Sierra Nevada foothill region than he or she does from Napa and Sonoma.

And in coastal Northern California (the Monterey-Big Sur wine region), good wine retailers there will put a major focus on wines from that wine-producing area.

It's all about localization -- and California is full of local, micro wine regions.

Having a basic selection of proprietary, branded wines is fine for Fresh & Easy. However, as long as that is the major focus in the stores it won't be a top wine retailer in its respective markets. There are too many good wine retailers doing the right things for that to happen.

However, if as part of this category review the retailer focuses on the three things we outlined earlier, it has a far better chance of improving its current wine category sales and eventually joining the ranks of the top wine retailers in the markets it has its stores in.

When it comes to wine merchandising and retailing in the Western USA, especially in California, everything is local, despite the fact imports have an important place in the overall category product mix.
Posted by Fresh & Easy Buzz at 3:13 PM