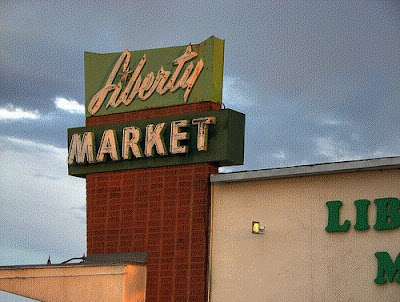 On October 4, Wal-Mart opened one of its first four small-format (15,000 -to- 20,000 square foot) Marketside combination grocery and fresh foods markets in the city. The mega-retailer opened three other Marketside stores the same day in nearby Chandler, Mesa and Tempe. Tesco has Fresh & Easy stores in each of those cities as well.

In other words, two of the biggest retailers in the world have invaded Gilbert, Arizona with their respective small-format food and grocery stores. That's enough to give pause to any supermarket chain or independent grocer anywhere.

But the Gilbert invasion by the two big guys of food and grocery retailing hasn't scared off Gilbert's historic Liberty Market, an independent grocery store that's been open in the city since the U.S. Great Depression.

Liberty Market owner Owner Joe Johnston and his partners have just completed a major remodeling of the supermarket located in downtown Gilbert's historic Heritage District, transforming the grocery store into what Johnston calls an "urban marketplace."

The inside of the historic market features a mix of the old and new. There are modern-style clear exposed bulbs hanging from rustic ceiling beams built in the 1930s. On the same concrete floor originally poured in 1958 sit modernist tables with smooth black surfaces. Clean and sleek.

The remodeled market also features an in-store demonstration kitchen where shoppers can see what the chefs are doing through two large glass windows.

Among the modern equipment in the in-store kitchen is a Vulcan Oven in which artisan pizza's are baked for sale in the store.

A major part of Liberty Market's new urban flair includes lots of fresh, prepared foods from the kitchen. There are full ready-to-heat dinner entrees and side-dishes as well as ready-to-eat grab-and-go foods prepared right in the store.

The market also features an in-store espresso bar/cafe which owner Johnson says he wants to become a downtown Gilbert social hub as well as a place where the city's many commuters will stop off on there way to work. Also returning often after work to pick up prepared foods items for dinner produced by the in-store chef.

Professional chef David Traina is Johnson's partner in Liberty Market. He will be running the in-store kitchen, creating what he says will be a combination of basic comfort foods along with more adventurous offerings such as sweet potato salad and authentic Sicilian pizza's, among other offerings. There are fresh baked goods as well.

Joe Johnson owns three successful restaurants in Gilbert. Therefore focusing on in-store-made prepared foods along with retail food and grocery items in the revamped Liberty Market is a natural for both him and chef Traina.

The historic market has had four owners since it opened in the 1930's. Johnson is the fourth and says he wants to be the last.

Although he has done extensive remodeling to Liberty Market, owner Johnson says it still retains its historic core. He's referring to the historic elements such as the concrete floor poured in 1958, the 1930's wood ceiling beams and other historic elements which have been retained in the store's remodeling.

The fresh food and grocery market is part of the revitalization of downtown Gilbert and its historic district.

Johnson and Traina say they fear not the big chain outlets that have recently opened in Gilbert. They believe their upscale yet historically-grounded Liberty market and its downtown location offer residents and shoppers not only convenient food and grocery items but restaurant-quality prepared foods items supported by Johnson's reputation as a successful restaurant operator in the city.

Additionally, It's also the only market in the downtown core of Gilbert. Downtown Gilbert been adding various new amenities like Water Tower Park, which is slated to open next month, and the Western Canal Trail, which is being completed and is scheduled for an early 2009 opening, according to Johnson.

These new public features, along with a number of new retail shops that have opened in downtown Gilbert in the last couple years, are expected to draw local residents as well as residents from outside the city to the downtown core., the market's owners believe.

Johnson and Traina say they are prepared for those new customers when they come, along with serving the residents of the entire city of Gilbert.

One of the unique aspects of food and grocery retailing in the U.S. is the independent grocer and his or her ability to survive and thrive in many cases right next door to mega-chains by finding one or more specialty niches, focusing on local tastes and styles, and offering superior service, along with a few other key things.

For example, it isn't likely you would find an independent grocer spending big bucks to remodel a store in a city in the United Kingdom, where Tesco (UK's number one retailer) is based and where Wal-Mart owns the number two chain Asda, where there are two Tesco stores and one Asda unit. The chains today overwhelmingly dominate the UK food and grocery store business and market.

But independent retailers like Liberty Market open and remodel stores in such cities everyday in the U.S.

Gilbert, Arizona has units of other major chain grocers as well as the Tesco and Wal-Mart-owned stores. But that isn't stopping Liberty Market either.

The independent grocer believes it's found a niche, and that it will not only survive in a very competitive Gilbert, but that it will thrive. That's why the market's owners have taken the risk and invested in historic Liberty Market's remodeling, creating that "urban marketplace."
Posted by Fresh & Easy Buzz at 5:14 PM

Fresh and Easy seems to be growing in popularity. I like the stores and the fresh brands that they carry. Just wish they had one closer to where we live.