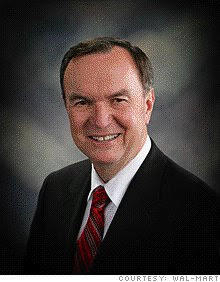 In a move today that took nearly everybody by surprise, Wal-Mart Stores, Inc. replaced CEO Lee Scott with Mike Duke (pictured at left), the head of the mega-retailer's international operations. Duke will take over as CEO of Wal-Mart in February, 2009. Wal-Mart's investors responded to Duke's appointment by sending the stock up $2.26, or 4.5%, to $52.92 on Friday. The consensus among analysts is that Duke is a good retailer and deserved the CEO's job.

Duke, a former department store executive, only joined Wal-Mart in 1995. he was named to head the company's international division in 2005, making his three year rise from that key position to CEO a meteoric one. Prior to joining Wal-Mart, Duke's 23-year retail career included work for Federated Department Stores and May Department Stores.

When he joined Wal-Mart in 1995 Duke first led the company's logistics divisions and U.S. Wal-Mart stores before being named international chief in 2005.

The announcement paved the way for what some say is his eventual ascension to the top job at Wal-Mart Stores, Inc. Many believe Castro-Wright, who is considered an extremely excellent retailer, is ready now to be CEO. However, his promotion is a pretty clear sign he's next in line for the position if he wants it whenever Mike Duke leaves. Duke held the same vice chairman position Castro-Wright was just promoted to, as did Lee Scott, before being named CEO. Duke and Scott were responsible for different aspects of Wal-Mart's business though as vice chairman

Current CEO Lee Scott, who has worked at Wal-Mart for three decades and served as CEO for the last nine years, isn't going away anytime soon though. He will continue as chairman of the executive committee of the board and as an adviser to Mike Duke through January 2011, Wal-Mart spokesman David Tovar said today.

The timing of the announcement caught most people in the retail industry and on Wall Street by surprise. Changes at the top for huge corporations like Wal-Mart generally don't come towards the end of the year or before the holiday season. Additionally, such changes are usually made at the beginning of a major corporation's fiscal year, which isn't the current case at Wal-Mart.

"Lee (CEO Scott) decided the time was right for him to retire and approached the board about doing so," Tovar said. "The board has an ongoing and rigorous succession plan process. We think the right time is now. It's a time of strength for us."

Wal-Mart didn't name a successor to Mike Duke today as part of the changes at the top for the world's largest corporation and retailer. Duke is Wal-Mart's most senior international executive, which is a key post. Some are suggesting the fact a replacement wasn't named today for Duke could mean Wal-Mart might make an outside hire to replace Duke for its most senior global executive position.

Lee Scott's nine years as the head of Wal-Mart Stores, Inc. has been overall a very successful tenure.

Under Scott's leadership, Wal-Mart has put a relentless strategic and operational focus on value that has clicked with shoppers facing myriad economic concerns. He has also put a major emphasis on revamping merchandise assortment, improved store layouts and shored up Wal-Mart's environmental and labor image, positioning the chain as a Wall Street darling after a prior streak of criticism by the media, labor and environmental groups. Wal-Mart currently is the only company on the Dow Jones listing that's up for the year, for example.

Additionally, Wal-Mart has also become the number one seller of food and grocery products in the United States in terms of overall national market share. Prior to Scott's taking the helm as CEO nine years ago Wal-Mart wasn't even close to achieving that distinction.

As CEO Lee Scott launched a massive new store opening program in the U.S. and internationally, focusing mostly on the retailer's mega-Supercenters and Sam's Club warehouse format club stores, but also on its discount stores and Wal-Mart Neighborhood Market supermarkets.

The CEO also has led an aggressive new format development program at Wal-Mart. All of the new Wal-Mart formats in the United States for example -- the small-format Marketside grocery and fresh foods stores; the "Community Market" Hispanic prototype store, the first of which opened in Texas earlier this year, the new smaller (100,000 square feet) Sam's Club prototype; the new Supercenter prototype design, and the new hybrid, smaller Supercenter located in vacant buildings (the first one, at 100,000 square feet located in a former big box supermarket building, opened in Modesto, California on November 12 -- have one basic thing in common: They all offer lots fresh foods and groceries for sale in them.

That all these new formats sell food and groceries as a primary or key feature isn't an accident. What likely could be seen historically as one of the two most important contributions Scott has made during his nine year run as CEO at Wal-Mart could very well be his decision to put the retailer on the path to becoming the dominant seller of food and grocery products in the United States -- and eventually the world. In fact it's this ficus on consumables that most analysts attribute to Wal-Mart's current success in the U.S. and globally during the severe economic recession and financial meltdown.

Scott's relentless pursuit of consumers' food and grocery dollars also led to a decision earlier this year at Wal-Mart USA to start converting scores of its Wal-Mart discount format stores throughout the U.S. in hybrid Supercenters by adding 15,000 -to- 50,000 (depending on the available space) square feet to the discount stores, all of it and then some being devoted to consumables, including fresh produce and meats.

Most of these ideas and concepts for the U.S. came from Eduardo Castro-Wright, who yesterday was the CEO of Wal-Mart USA and today is the company's new vice chairman. However Lee Scott gets CEO credit just like he gets faulted for the negatives, as it should be.

Lee Scott's other major historic contribution has been push as CEO to make Wal-Mart an even bigger global retailer than it was when he took over the head office eleven years ago.

Under Scott's leadership Wal-Mart acquired the Asda chain in the United Kingdom, making it that nation's second-largest retailer after Tesco.

The company grew business in Latin and Central America dramatically.

He did a joint venture deal bringing Wal-Mart into India, which has the world's second-fastest growing economy after China.

Scott grew Wal-Mart-China in a huge way, even saying it will someday in the not too distant future become the retailer's largest market, eventually surpassing the United States in terms of sales.

Most recently Scott inked a deal to bring Wal-Mart stores to Russia, which also has one of the world's fastest-growing economies, although that growth has slowed considerably since oil dropped from $142 per-barrel to $50 a barrel in just the last couple months. But it will rise once again -- the price of oil that is.

By naming Mike Duke, the head of its global business, as the new CEO, Wal-Mart is clearly sending a message that it plans on becoming an even bigger international retailer. The retailer's international division, which Duke heads, accounts for more than a quarter of Wal-Mart's $400 billion in annual sales. The company's future growth is globally. Although there's still room to grow sales in the U.S., it's the retailer's most mature market and pales in comparison to the opportunities internationally.

During his tenure as head of international operations, Duke had some hits, but also some big misses. For example, In 2006, Wal-Mart withdrew from Germany and Korea, two big setbacks for the company. And despite taking control of its Japanese business in 2007, Wal-Mart continues to struggle there.

Successes though include Brazil, which has experienced phenomenal growth and serves as a model for Latin America, and India, where Wal-Mart scored a coup by forming a partnership with Bharti Enterprises to expand in that country despite local opposition from mom-and-pop retailers. Add China to the list as well.

And Asda in the United Kingdom is doing extremely well despite that country's economic recession and its position as a distant number two to Tesco. Tesco has a 31% UK market share to Asda's about 17% share. But Asda has consolidated its lead over number three Sainsbury's, which was neck-to-neck with Wal-Mart-owned Asda just two years ago for number two, but now has about a 14.5% share to Asda's about 17%.

Beginning next year when he takes over Mike Duke will have a much different political agenda to contend with as CEO than Lee Scott did during the last eight years of the Republican Bush Administration. With a new Democratic President, Barack Obama, and a Democratic majority in both the U.S. house of Representatives and U.S. Senate, issues such as unionization, which Wal-Mart has been able to keep at bay, are going to become much more pressing for the company -- and for the new CEO.

If organized labor can get the Employee Free Choice Act passed, a provision of which ("quick check") allows workers to merely check a box if they want to be represented by a union rather than going through the current and sometimes elaborate secret ballot voting process, it will make it much easier for unions like the United Food & Commercial Workers (UFCW) to organize store-level Wal-Mart employees, something the union has failed to do for decades. President-Elect Obama and a majority of House and Senate Democrats support the Employee Free Choice Act. Therefore its prospects for passage in 2009 currently look strong.

New CEO Duke also will have some political fences to mend globally; fences he has yet to mend as head of Wal-Mart's international operations.

For example, in September, Mexico's Supreme Court chastised Wal-Mart for paying employees partially in vouchers that could only be used at company stores. The court compared Wal-Mart to the Mexican dictator Porfirio Diaz, who ruled the country from the late 1880s to 1911.

Wal-Mart is now Mexico's number one retailer of food and grocery products. As such it can't afford to get on the wrong side of the government.

Other global issues include its Asda chain in the United Kingdom. That nation's top three retailers -- Tesco, Wal-Mart's Asda and Sainsbury's -- have been involved in a multi-year battle with the British government involving charges of anti-competition and price fixing. Earlier this year Asda CEO Andy Bond directed executives of the chain to cooperate with British government authorities against competing chains in return for a promise that the retailer wouldn't be prosecuted or fined. The issue is still taking shape but Asda isn't completely in the clear yet either.

It will be extremely interesting to see who Wal-Mart names to replace Mike Duke in the key position of head of international operations.

Additionally, with Eduardo Castro-Wright moving from CEO of Wal-Mart USA to his new position as vice chairman of Wal-Mart, that opens up the key position of head of U.S. retailing, which remains Wal-Mart's single-largest division in terms of annual gross sales.

We will be watching this closely because since so much of Wal-Mart USA's strategy is focused on selling consumables, and developing new formats that feature food and grocery products, we would expect a person with a food and grocery retailing background perhaps to assume Castro-Wright's position.