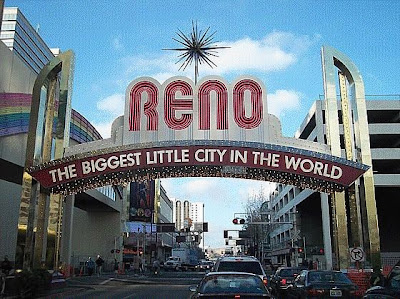 Fresh & Easy Buzz roving correspondent Reno Tom reports he's been told by a Wal-Mart Supercenter employee that the mega-retailer plans to locate one of its new small-format Marketside grocery and fresh foods stores at Plumb Lane and Virginia Street in Reno, Nevada.

When he isn't traveling the U.S., Reno Tom's home base is Reno. He reports that yesterday while he was shopping in his local Wal-Mart Supercenter, he was having a conversation with a store employee he knows. Reno Tom was telling the Wal-Mart employee about the new Whole Foods Market coming to town, and they were discussing it along with other related food and grocery store news and information.
While discussing the new Whole Foods Market natural foods superstore soon to open in the city, and the effect if any it might have on the Wal-Mart Supercenter, Reno Tom says the Wal-Mart employee told him the company plans to open a Marketside grocery and fresh foods store at the location of the city's old Park Lane Mall at Plumb Lane and Virginia Street. The mall has recently been demolished to make way for a brand new mixed-use development.
The new mixed-use development, where the Wal-Mart employee told roving correspondent Reno Tom the Marketside store will go, is to include retail shops, residential housing and public venues in a new-urbanism-style village design.
The area around the old mall and new development in Reno, which has a population of about 200,000, is undergoing much change and gentrification. New urban residential housing including lofts and condominiums are going up nearby and a new public market, perhaps similar to the famous Pike's Place Public Market in Seattle, Washington, is being planned for nearby.
Locating a Marketside small-format grocery and fresh foods store in such a development would make sense, since as we reported here a part of Wal-Mart's strategy with the food stores is an urban one. Over time there is going to be lots of foot traffic in this Reno neighborhood, including thousands of new residents.
Wal-Mart currently has eight stores in the Reno Metropolitan region, which has a population of about 410,000, according to 2007 U.S. Census Bureau statistics.
Seven of the stores are Supercenters ,and one store is a Wal-Mart discount store, which sells a limited assortment of dry and perishable food and grocery items (no fresh produce or meats though) and lots of non-foods like cleaning products and other household items, in addition to general merchandise, hard goods and soft goods
Three of the seven Supercenters (as well as the Wal-Mart discount format store) are in Reno; two Supercenters are in Carson City, one is in next door Sparks, and one is in Fernley.
As we reported here on May 22, Tesco plans to open its first small-format, convenience-oriented basic grocery and fresh foods Fresh & Easy grocery store in northern Nevada in the Silver State shopping center center at Prater Way and McCarren Blvd. in Sparks, which is next door to Reno.
Tesco also is in the process of negotiating for other Fresh & Easy sites in Reno and the Metropolitan region. For example, according to Karen Melby of City Works Department, Tesco Fresh & Easy representatives are interested in at Sparks Blvd. and Los Altos in an area called Spanish Springs in Sparks.
Fresh & Easy Buzz Reno area sources also tell us other potential locations include South Reno, other parts of Reno, Carson City and Fernley. Additionally, they've mentioned Incline Village in Lake Tahoe as a location Tesco Fresh & Easy representatives are looking at.
Meanwhile, if Wal-Mart locates a Marketside store in Reno, this will be the first outside of the four set to open this summer in the Phoenix, Arizona Metropolitan region.
As we reported here, Wal-Mart is looking in Southern and Northern California for sites for its small-format grocery and fresh foods Marketside stores.
The Sacramento Metropolitan region and the Reno Metro region are considered generally as part of the same food and grocery market region in terms of market share numbers and advertising buys. Therefore, locating one or more Marketside stores fits in well with the strategy to open stores in Northern California (and Southern), as well as in Arizona, for Wal-Mart.
After all, this is part of the same logic and strategy Tesco is using by opening 19 stores in the Sacramento market, which will start opening early next year, then looking for locations in the Reno Metro region market.
Wal-Mart also has eight Supercenters in northern Nevada, which is a pretty high concentration based on the region's population.
By eventually opening say three -to- four small-format Marketside stores in the Reno Metropolitan area, Wal-Mart could focus on that "fill-in" shopper strategy Wal-Mart USA chief Eduardo Castro-Wright discussed in this piece we published earlier today, while preventing any cannabalization of the Supercenters because unlike Tesco's strategy of being grocery stores for all consumers (supermarkets in the pure definition of the term), Wal-Mart's focus with Marketside is more narrow as we described here.
Posted by Fresh & Easy Buzz at 7:56 PM