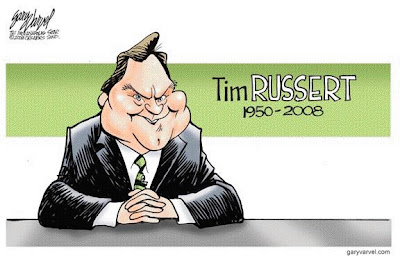 In Memory of the life of Timothy J. Russert, an American Original.

Tim Russert's books about father's and sons, father's and daugher's:
>"Big Russ and Me: Father and Son--Lessons of Life"
>"Wisdom of our Fathers: Lessons and Letters from Daughters and Sons"
Tim Russert's Favorite Charities:
[Click here for more information]
>Boy's and Girl's Clubs of America
>Catholic Charities USA
NBC News today devoted a special edition of Mr. Russert's program, Meet the Press, to the life of 'America's Journalist,' Tim Russert. To view today's show, read more about Tim Russert and offer your condolences to his family, click here.
"If it's Sunday, it's Meet the Press" was how Tim Russert signed off at the end of his weekly Sunday morning news interview program each week.
Sunday's in America will never be quite the same for those who need and want to be informed about what our nation's leaders are doing in our name, as not only was Mr. Russert an American original as a human being, but as a journalist his target audience was "everyman;" from his 89 year-old dad "Big Russ" back home in Buffalo, to the single mother in California struggling to help her daughter through college, and the small business person in Ohio trying to make payroll.
At Tim Russert's desk the politically powerful always received a fair shake, but never were let off easily. Thanks Tim. Godspeed.
Cartoon By: Gary Varvel, Indystar.com.
Posted by Fresh & Easy Buzz at 4:04 PM