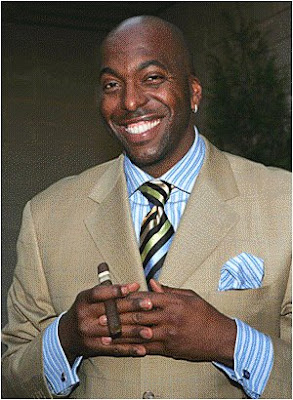 This just in: Intrepid blogger Los AngelesNomad.com reports what very well could be the first published celebrity sighting at the Hollywood, California branch of Fresh & Easy Neighborhood Market.
The Los Angeles Nomad, who travels the city and region in search of news and events, writes in the blog that over the weekend the intrepid Nomad spotted John Salley, former NBA basketball player, occasional actor, and co-host of the popular "The Best Damn Sports Show Ever" sports show on Fox cable TV.
The John Salley sighting in the LA Nomad's own words:
"You never know who you’re going to see in Hollywood. However, you’re not usually going to find them in a grocery store. This past weekend, I saw John Salley at the new Fresh & Easy market at the corner of Hollywood and Sycamore. Located right off the Hollywood Walk of Fame, I guess the place is beginning to get some well-deserved star appeal. With prices similar to Trade Joe’s and variety comparable to Ralphs, you gotta love this new neighborhood grocer. Just be wary of the unusually high sodium content. Packaged goods come with hidden costs."
Fresh & Easy Buzz has had its Southern California correspondents checking out the Hollywood Fresh & Easy as often as possible for celebrity sightings, and we monitor the blogs rather closely for them as well. It looks to us that the Los Angeles Nomad has the first publicly published Fresh & Easy Hollywood celebrity sighting.
Upscale Bristol Farms, owned by SuperValu, Inc., and fancy Gelson's supermarkets, locally-owned by Arden-Mayfair Group, along with Whole Foods Market, tend to get the most celebrity sightings in Hollywood, Brentwood, Beverly Hills and the other surrounding star-studded cities. Supermodel and TV show host Heidi Klum and her singer-husband Seal love Gelson's and Bristol Farms, and at home in New York City and when in Hollywood from New York, actress Scarlet Johanson, who's been in the news recently as being an email pal to Democratic U.S Presidential candidate Barack Obama, is a Whole Foods Market girl (as well as an Obama girl it appears), according to Fresh & Easy Buzz's Hollywood correspondent.
However, with Fresh & Easy's location right off the famous Hollywood Walk of Fame, we knew there would be a published (or unpublished but reported to us) sighting sooner rather than later. There may have been other celebrity sightings at the Hollywood Fresh & Easy published before The Los Angeles Nomad's, but we haven't seen them...and we do have a correspondent who lives in Hollywood and actual keeps an eye out for such things.
But we have a question for Fresh & Easy Buzz readers? On a rating scale of A-through-D--A being an A-list celebrity, B being a B-lister, and of course D being at the bottom of the celebrity heap, the dreaded D-lister, the celebrity status celebrated and even made popular by Hollywood comedian Kathy Griffin--where would you rate John Salley?
In other words, how would you rate the John Salley celebrity sighting at the Hollywood Fresh & Easy grocery store? Was it an A-lister, B-lister, C-lister...or D-lister celebrity sighting? Feel free to explain why you made your choice. Just click on the comments box below to offer your rating.
Posted by Fresh & Easy Buzz at 3:36 PM

I give Salley a C-lister. Was big NBA star but that's over. Good on the sports show but that's not real big time. Not really an actor, although he tries.

A gentleman's C of course.