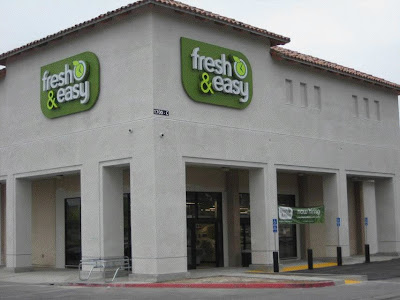 The large, full-color brochures distributed to neighborhood residents on the eve of the Fresh & Easy grocery market's grand opening on Wednesday have this title: "Don't Be Fooled By Fresh & Easy."

The brochures then go on to call Tesco the "Wal-Mart of the United Kingdom," and detail three past incidents involving food safety issues at Tesco stores in the UK, according to the text of the brochure provided to Fresh & Easy Buzz by a resident of that Manhattan Beach neighborhood who received one of the brochures on his doorstep.

These are the same brochures the UFCW has been distributing to neighborhoods where existing Fresh & Easy markets are located in Southern California, the Las Vegas, Nevada Metropolitan region and in Metropolitan Phoenix, Arizona for some months.

The key points of information (as printed) on the brochures are as follows:

Below these bullet points it says: for more information go to: www.freshandeasyfacts.com

At the bottom of the brochure in small lettering it says: "Produced by Fresh and Easy Facts, a project of the United Food and Commercial Workers."

Under each of the three food safety bullet points above, there's information about incidents at Tesco supermarkets in the UK in which government authorities found out-of-code food products and organic foods labeled as organic that weren't organic, along with other food safety violations. Tesco settled these issues with British authorities in each case.

Tesco's Fresh & Easy Neighborhood Market USA division hasn't been accused by consumers or government authorities of any of these food safety issues in the U.S., to Fresh & Easy Buzz's knowledge.

Tesco's Fresh & Easy Neighborhood Market has distributed its own promotional brochures, including its $5-off coupon good for any grocery purchase of $20 or more, to residents who live in the neighborhood surrounding the new Manhattan Beach store, which is something the retailer does prior to each new store it opens.

The UFCW timed its anti-Tesco Fresh & Easy brochures to arrive on the residents doorsteps at about the same time as the Fresh & Easy promotional brochure and coupon arrived, which demonstrates the union is escalating its campaign against non-union Fresh & Easy Neighborhood Market by going head-to-head with the retailer in the timing of the brochure wars.

Fresh & Easy's doorstep brochure also includes an offer for a free reusable canvas tote bag for every purchase of $10 or more consumers make at the new Manhattan Beach store which opens Wednesday.

Below is a summary of the text of the Fresh & Easy Neighborhood Market promotional brochure distributed to residents:

The tag line on the front of the Fresh & Easy brochure says: "We're in your neighborhood with fresh groceries & low prices."

Inside the brochure it says: "We're a neighborhood-sized market that's quick and easy to shop."

Join us for our grand opening in Manhattan Beach, where we'll be donating $1,000 to a local charitable organization. Check presentation and Ribbon Cutting, 10:00 am on July 2

The UFCW union's brochure is designed to most strongly attack the first bullet point on the Fresh & Easy promotional brochure, which says: " (We feature) "Fresh & Wholesome Foods." The website address listed on the UFCW brochure goes into more detail on this issue.

By undercutting Fresh & Easy Neighborhood Markets' positioning that it offers "Fresh & Wholesome Foods" using the counter messages from the past food safety situations at Tesco stores in the UK, the UFCW hopes to suppress the number of shoppers who visit the respective Fresh & Easy stores, thus using it as one of its many elements designed to get Tesco and Fresh & Easy senior executives to sit down and meet with union leaders about potential unionization of store-level employees, which is the union's goal.

Thus far, Tesco has refused to meet with UFCW executives.

UFCW to have a presence at store grand opening Wednesday

The union plans to have representatives outside the store handing out the brochures, along with informing shoppers verbally that Fresh & Easy is a non-union food retailer, unlike competitors Vons, Ralphs, Stater Bros., Gelson's, Bristol Farms and most of the major chains and independents in Southern California.

That a Trader Joe's non-union grocery market is located right in the same shopping center, right next to the Fresh & Easy store, demonstrates even further that Tesco and its Fresh & Easy Neighborhood Market USA chain is the primary non-union retailer target for the UFCW in the Western U.S., as we've previously reported.

For example, neighborhood residents haven't received brochures or any other forms of communication informing them Trader Joe's also is a non-union chain like Tesco's Fresh & Easy. Further, although the UFCW has attempted to organize Trader Joe's store-level workers in the past, the union has failed thus far get one of the chain's stores (its employees) to approve a union petition to date.

In fact, for all appearances it seems the UFCW has decided at least for now to not launch a campaign to further attempt to unionize Trader Joe's, which like Fresh & Easy is a foreign-owned grocery chain. Trader Joe's is owned by members of the same German family who own the small-format Aldi discount grocery chain. It's non-union Aldi USA chain has nearly 900 stores in the Midwest, Mid-Atlantic and eastern regions in the U.S.

As we were the first to report early this year, the UFCW decided to heat up its campaign against Tesco and its Fresh & Easy Neighborhood Market USA grocery chain late last year, with a target for its more aggressive campaign activity beginning in late spring of this year.

In just the last couple months, in addition to stepping up its grass roots campaign against Fresh & Easy in Southern California, Nevada and Arizona, the union has taken its campaign to the UK, first holding a major press conference with participation and support of a member of the British Parliament in London, then attending and demonstrating at the Tesco PLC Annual General Meeting (AGM) on Friday, June 27. The union's UK campaign is named: "The Two Faces of Tesco."

As we reported in this June 26 piece, the UFCW also obtained the support of presumptive Democratic Party Presidential nominee Barack Obama, who sent a letter to Tesco PLC CEO Sir Terry Leahy urging him to have his top Fresh & Easy Neighborhood Market executives meet with the union's leadership to discuss the unionization issue.The recent UFCW press conference garnered lots of publicity in the UK, as did its presence at the AGM on Friday.

The joint Western USA-UK grass-roots and media campaign is designed to bring maximum pressure to bear on Tesco in order to get it to come to the table and meet with the UFCW regarding the potential unionization of Fresh & Easy Neighborhood Market.

Fresh & Easy Buzz has learned the UFCW will be doing more brochure drops prior to other Fresh & Easy stores opening like it's done with the Manhattan Beach location.

Additionally, the union, which represents 1.3 million union grocery clerks in the U.S., Canada and Puerto Rico, plans to increase its picketing at existing Fresh & Easy grocery stores, along with doing more brochure drops in the neighborhoods surrounding those existing stores.

Tesco plans to open at least 30 Fresh & Easy grocery markets in the next 90 days in Southern California, Arizona and Nevada. The UFCW plans to have union representatives at nearly all of those store grand openings to hand out brochures and talk to shoppers about the union issue.

In contrast, there hasn't been any UFCW representative presence of note at recent new store grand openings of Wal-Mart Supercenters, Trader Joe's, Whole Foods Market or other non-union food and grocery retailer-owned supermarkets in Southern California.

Where the UFCW campaign will lead is uncertain at this time. Tesco continues to stick to its position that it's up to store-level employees if they choose to join the union or not, saying it has no problem with the UFCW attempting to organize the workers under the provisions of U.S. labor law.

The UFCW sites the fact Tesco stores in the UK are unionized, and says it doesn't understand why this being the case Tesco won't sit down and discuss the issue with U.S. UFCW leaders.

It appears it's going to be a long hot summer in more ways then one in Southern California, Arizona and Nevada.
Posted by Fresh & Easy Buzz at 5:22 PM

The tactics being used by the UFCW union are disgusting.

Tesco have openly said that their employees are free to join a union. In the UK the tesco employees are unionised (many opt not to be)

The 3 incidients were isolated incidents occuring at 3 of the companies 1500 stores a few years ago - not common practice.

The entry level pay rates are quite good, with medical insurance and the other perks they offer.

the ONLY reason that the unions want Tesco on board is for $$$. If Tesco plans to have 200 stores employing about 5-6000 people by the end of next year that would be atleast $50,000 a month in the unions pockets. Thats all they care about, plain and simple.

If it wasn't, they would be sending out leaflets focusing on drumming up support from the locals to get the union on side, not hiding behind some charade campaign aimed at discrediting the company.

Typical UFCW hate mail ! Every time a non union shop opens up, they hire their goons, and fire off more hate mail. These guys will stop at nothing get every grocery worker on their payroll. I myself am a proud Bristol Farms employee, and have see their hate first hand.

When we opened up our Westchester store in 2007, the UFCW hired Teamsters to park a huge rig on the street.While they were bashing our store, they have the nerve to send their president inside the store to make sweet talk to our CEO. It took all my might not to kick that guys a** right outside the store !!!

That being said, I hope Fresh and Easy keeps on expanding ! They provide a wonderful service, and very good prices. This is coming from somebody who already gets 20% off by shopping at Bristol.