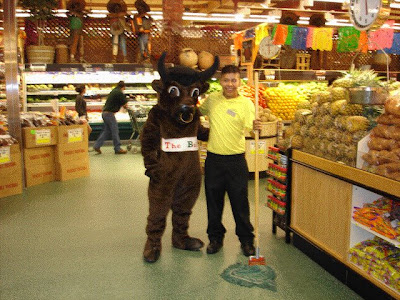 Studies conducted by U.S. organizations such as the Mexican-American Grocers' Association, Food Marketing Institute, the UCLA School of Business and others show fresh produce to be one of the top reasons Hispanic consumers give for choosing a supermarket. Variety, abundance (bulk rather than pre-packaged) and quality are the three key attributes most given by Latino consumers in these studies when it comes to the fresh produce category. Price is important but not at the top of the list. Value, top quality and super-fresh produce at a reasonable price, is what's most important. This is evidenced by the fact Hispanic consumers spend a higher proportion of their incomes on food than all other ethnic groups in the U.S. Above is Pro's Ranch markets famous "Ranchie the Bull" mascot in a store produce department with a produce clerk.

Pro's Ranch Markets, which is owned by Southern California grocery retailing veteran Mike Provenzano Sr. and his sons Michael, Steve, Rick and Jeff, currently has four of its large, discount supermarkets, which put an emphasis on Hispanic food retailing, in the Phoenix region. The two new stores will bring that total to six of the supermarkets in the market, which average 55,000 -to- about 80,000 square feet in size.

The growing independent food retailer today is opening its first supermarket, a 79,000 square foot discount powerhouse with a special emphasis on Latino products along with basic supermarket offerings, in Albuquerque, New Mexico, its first location in that state.

The New Mexico store is the independent retailer's tenth location. along with the just-opened New Mexico store and the four units in the Phoenix, Arizona region, there are four Pro's Ranch Markets in the Central Valley, California cities of Bakersfield (2), Delano and Arvin, and a store in El Paso, Texas.

Mike Provenzano Sr. says the grocer plans to open additional stores in Arizona and New Mexico, as well as in California, and perhaps in other western states.

The Pro's Ranch Markets stores put a major emphasis on merchandising produce and fresh meats, with huge departments for each category, and selling the items as cheap as possible.

The stores have numerous service departments; particularly a number with a Hispanic merchandising flair. These include: an in-store bakeries which features huge tortilla machines that churn out homemade tortillas throughout the day and evening, as well as offering in-store baked Latino breads and pastries; in store seafood on fresh ice departments which include a seafood taco bar; fresh salsa bars; both self-service and old-fashion service meat departments; in-store fresh, prepared foods departments; and homemade specialties like in-store made chorizo and other Latino favorites.

The stores' produce departments carry all basic fresh fruits and vegetables, along with scores of Hispanic specialty produce items, nearly all merchandised in bulk and piled high farmers' market style.

The markets carry a complete selection of tradition foods, groceries and nonfoods as well. Although the supermarkets are geared from a merchandising aspect to Hispanic or Latino shoppers, their overall positioning also encourages shoppers of all ethnic backgrounds to shop the stores for groceries and fresh foods at discount prices.

About 40% of Arizona's population is comprises of Hispanics or Latino's, which makes "Hispanic-oriented supermarkets" actual mainstream rather than specialty since nearly half of the state's entire population is of that ethnicity.

As a result of this fact, food retailers who focus their merchandising and positioning to Hispanic consumers in Arizona are equal competition for general food and grocery retailers like Safeway, Bashas, Frys, Wal-Mart, Tesco's Fresh & Easy and the other food retailing chains and independents in the market.

Tesco currently has about 20 of its 61 small-format Fresh & Easy Neighborhood Market combination basic grocery and fresh foods markets in the Phoenix Metropolitan/East and West Valley regions of Arizona, with many more new stores set to open in the market in the next 90 days.

As we write about regularly in Fresh & Easy Buzz, Arizona, and especially the Phoenix Metropolitan market, is arguably the most competitive food and grocery retailing market in the U.S. at present. That market keeps getting even more competitive as food retailers large and small continue to add new stores in the area, heating up even further what alrady is a white hot competitive food and grocery retailing market.
Posted by Fresh & Easy Buzz at 11:56 AM

WOW!!! That produce department looks just like Northgate Markets in California!!! I love those stores!!!!