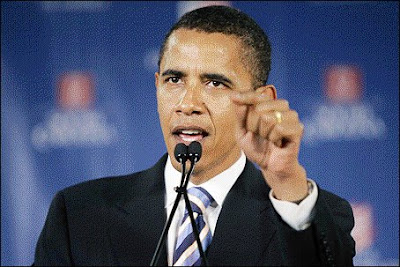 The UFCW represents 1.3 million retail clerks at union supermarkets in the U.S., Canada and Puerto Rico. The supermarket chains include the top three in the U.S.: Kroger Co., SuperValu, Inc. and Safeway Stores, Inc., along with numerous others.

In the letter to Tesco CEO Leahy, Senator Obama writes: "I again urge you to reconsider your policy of non-engagement in the United States and advise your executives at Fresh & Easy to meet with the UFCW. I am aware of Tesco's reputation in Britain as a partner to unions. I would hope that you would bring those values to your work in America."

The "again" Senator Obama is referring to in his letter to Mr. Leahy is in regard to the fact this is the second letter to Tesco corporate and its Fresh & Easy Neighborhood Market USA division the Democratic nominee for President has written about the union issue and Fresh & Easy.

As we reported in this February 8 piece, "Leading Democratic Candidate for President Barack Obama Joins Group in Asking Tesco's Fresh & Easy to Put More Stores in Underserved Neighborhoods," Senator Obama wrote both CEO Leahy and Tim Mason, CEO of Fresh & Easy Neighborhood Market USA, urging them to locate more Fresh & Easy grocery stores in underserved or "food desert" neighborhoods as the retailer has said it will, along with urging the executives to meet with UFCW leaders.

At the time, Senator Obama was still struggling against multiple Democratic Party candidates, with Senator Hillary Clinton thought to be the favorite, for the Democratic party Presidential nomination.

However, when Mr. Edwards dropped out of the race earlier this year, the UFCW put its support behind Senator Obama, helping him with significant fund raising and grass roots support to defeat Senator Clinton for the Democratic Party nomination, which he will officially be given at the Democratic party convention later this summer.

As we've reported on Fresh & Easy Buzz, to date Tesco has refused to meet with UFCW executives to discuss the potential unionization of Fresh & Easy Neighborhood Market workers in the U.S. U.S. labor laws don't require a company to do so.

The second letter from Senator Obama to Tesco, asking CEO Leahy to have his senior executives meet with UFCW representatives, comes on the eve of Tesco's Annual General Meeting (AGM), which is tomorrow in the UK.

As we reported in this June 22 piece, "Vocal Cast of Critics and Advocacy Groups to Attend Tesco's Annual General Meeting On Friday, June 27," Joseph Hanson, the Washington, D.C-based president of the UFCW union, plans on attending Tesco's AGM tomorrow at the Motorcycle Museum in Birmingham, UK.

Commenting on Senator Obama's letter to Tesco CEO Sir Terry Leahy, Mr. Hanson says: "Senator Obama's support for our campaign is welcome and timely. Tesco's UK investors should now be asking Sir Terry Leahy at the company's AGM whether it is really in Tesco's long-term business interests to continue its policy of non-engagement with union and community groups in America.

"Tesco's business conduct in America is on the radar of the man who could be the next president. It really is time for investors to start asking Tesco's chief executive hard questions about the company's business judgments."

As we reported in this June 4 piece, "News and Analysis: UFCW Union Takes its Tesco Union Organizing Campaign Across the Pond to the United Kingdom Beginning Today," The UFCW launched a public relations campaign in the UK on June 4 designed to bring Tesco and its Fresh & Easy Neighborhood Market USA division to the table to discuss the union issue just ahead of tomorrow's AGM, which union president Hanson will attend, along with numerous aids and supporters.

The UFCW's UK campaign, Senator Obama's second letter to CEO Leahy, the planned press conference and demonstration at tomorrow's annual meeting, and the union's campaign back home in the U.S. since November of last year, all are designed and coordinated it would appear to bring maximum pressure on Tesco agree to sit down at the table and talk with UFCW leaders.

Thus far though Tesco has kept to the same position and statement it's had all along regarding the union issue, which is that the UFCW is free to organize Fresh & Easy Neighborhood Market store-level employees within the bounds of U.S. labor laws, and that it is up to the store employees as to whether they want to organize a petition drive and ultimately join the union.

In a recent statement a Tesco spokesperson added: "We are a good employer, we are paying good wages, offering good benefits. It is down to individuals (at Fresh & Easy Neighborhood Market) if they want to join (the union) but the signs are there is very little interest among our staff."

The UFCW, led by union president Hanson, will be outside Tesco's annual meeting tomorrow in full force. A press conference is planned, which may feature union supermarket clerks from unionized U.S. supermarkets, along with one or more British politicians who are supporting the UFCW, as well as others.

We have it on good source that Tesco CEO Sir Terry Leahy, Fresh & Easy Neighborhood Market CEO Tim Mason and other company senior executives have been taken by surprise at how aggressive the UFCW has been in terms of Tesco's Fresh & Easy USA.

However, good research (like just asking two or three industry people over lunch), which the chain claims it conducted for nearly two years before opening the first Fresh & Easy grocery market, would have shown them that in the Western USA, nearly every major supermarket chain and most medium -to- larger independent food and grocery retailers are union except for Wal-Mart (which has very little food retailing presence in California for example), Trader Joe's (which isn't a major market share player), Whole Foods Market, Inc. (which despite it huge success still remains a minor market share food retailer), and a handful of other niche players.

All the top market share chains in California, Nevada and Arizona--Safeway (Safeway and Vons banners), Kroger (Ralphs and Foods Co), SuperValu (Albertsons, Bristol Farms), Stater Bros., Bashas, Save Mart, Raleys and many others are unionized supermarkets.

Speaking of research and Whole Foods Market, remember Senator Obama's now somewhat famous "Arugula moment" (the fancy salad green) comment during the Democratic primary campaign just a couple months ago, in which he said something to the effect of "have you seen how much the price of Arugula has gone up at Whole Foods," during a speech and talk in front of an audience about soaring food prices in the U.S.?

His opponents, all now defeated by him, jumped all over the now Democratic Party Nominee for President for that statement, implying he was elitist for even mentioning Arugula in a crown of middle-income (and higher income) voters and consumers who perhaps they suggested were more likely struggling to pay for a head of iceberg lettuce rather than Arugula. Although we're sure there were many in the crowd who could afford Arugula without taking much of a financial hit at all.

Well, were told Senator Obama knew well the soaring cost of Arugula at Whole Foods because back home in Chicago (where Mrs. Obama does most of the grocery shopping), and when alone in Washington D.C., he likes shopping at non-union Whole Foods from time-to-time (although that's not likely been the case since he started running for President), as we do, although we also shop at and support union stores and employees as we're sure he does as well.

After years of trying to organize Whole Foods Market store workers unsuccessfully, the UFCW has to all appearances given up on the cause, as it seems to have done with Wal-Mart and Trader Joe's.

Perhaps in part that's why Tesco and its Fresh & Easy Neighborhood Market USA chain is square in the union's sights; it sees an opportunity to focus primarily on one non-union food retailer early in its development in the U.S. In contrast, the union waited for years and years after the respective chains were established before attempting any serious organizing of Wal-Mart, Whole Foods Market and Trader Joe's workers.

For example, Whole Foods Market, Inc. CEO John Mackey, who describes himself as a combination Libertarian and social liberal with a free-enterprise entrepreneurial bent, has stated for years he has no intention of sitting down with UFCW union executives to discuss unionizing Whole Foods stores. In fact, whether correct or exagerated, Mackey claims unionizing the Whole Foods stores would ruin the company's culture and the "team" approach to running the stores he says is the major key to the retailer's success.

In the case of Whole Foods and Trader Joe's, the store level employees have made it pretty clear they don't want to belong to the union. With Wal-Mart it's a much more complex issue which we don't have time to go into here.
On the other hand, all of the unionized supermarket chains mentioned above, negotiated the latest round of contracts for their respective Western U.S. division operations with the UFCW in record time, and never even intimated they would like to be non-union, generally saying the professionalism and status of their unionized store clerks, unlike John Mackey's view, is a major contributor to their respective succeess as food and grocery retailers.

Finding itself with the UFCW, as well as the possible 2009 President of the United States, focusing on it like a laser beam, the question is what will Tesco do?

Will it hold firm like Whole Foods Market, Inc. and Trader Joe's have done? Will it fight unionization of its Fresh & Easy Neighborhood Market USA stores using nearly any and every means possible like Wal-Mart has done? Or will it decide to sit down with the UFCW union's leaders and begin a conversation as the possible next President of the United States is asking the company to do?

Perhaps tomorrow's AGM will shed some light on which or any of those decisions Tesco ultimately decides to make, depending on if a significant number of substantial Tesco PLC shareholders discuss and offer strong points of view one way or the other on the issue.
Posted by Fresh & Easy Buzz at 3:54 PM

Hopefully they'll do what's best for the customer.