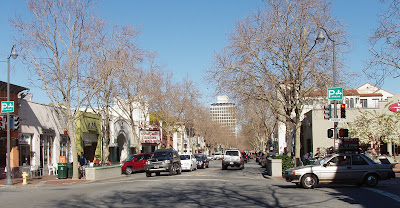 Despite being in the heart of California's high tech Silicon Valley and home to Stanford University, the San Francisco Bay Area city of Palo Alto, California--which is one of the highest income cities in America (Palo Alto's median household income is more than twice the U.S. national average), along with being in the top three American cities in terms of having the most college graduate and post-graduate residents per-capita--keeps losing supermarkets.

Although far from a "food desert," in the last few years Palo Alto has seen a Lucky's and Albertson's (two chain branches) close, two independent supermarkets, Midtown Market and All-American Market, go out of business, and the local Palo Alto Co-op grocery store, which was started in the 1960's and operated for about four decades until just recently, close its doors.

There still remain supermarkets in Palo Alto of course: There's a Safeway Lifestyle format supermarket; an upscale Andronico's Market, which is part of a 10-store Bay Area family-owned chain; a Whole Foods Market; an upscale Mollie Stone supermarket, which also is a branch of a multi-store Bay Area-based independent; local JJ&F supermarket; and one or two other smaller grocery stores or marts. There's also a number of supermarkets within a few minutes drive from Palo Alto, as the city is located in an urbanized region.

The city of Palo Alto, which has a (2007) population of about 62,000 (not including Stanford students which adds about 30,000 full-time residents to the city when school is in session), is currently sounding the alarm about it's ongoing loss of supermarkets however because another popular independent supermarket, the 60-year old JJ&F Market mentioned above, could potentially close its doors.

JJ&F is a mid-sized supermarket, which is the type and size of food stores the Palo Alto Planning and Transportation Commission and City Council wants to retain. The city also wants to attract new such supermarkets to Palo Alto.

Palo Alto, which is located about 35 miles south of San Francisco on the peninsula, has a pedestrian/public transportation/bicycle-first urban planning and transit policy, which means its city planning and zoning policies, including commercial and retail, are designed around the concept of being a pedestrian-friendly city, with the automobile coming last after walking, biking and riding public transportation. Although if you've ever seen the traffic in the city--not to mention all the BMW's and Mercedes-you would wonder if that policy is working.

Palo Alto's downtown is designed based on this policy. Main Street is very pedestrian friendly. The street is narrow and the sidewalks wide. Benches are all over the village-designed and perfectly landscaped streetscape, as are bike racks.

Palo Alto's Main Street--University Avenue pictured at the top of this piece which runs into Stanford University at one end and downtown Palo Alto at the other end-- and the downtown's side streets are packed with retail stores and shops of all kinds, as well as restaurants, cafes and trendy boutiques. When a storefront becomes empty downtown, which isn't often, it's filled quickly, even though Palo Alto has among the highest retail building rents in America.

Last night, the Palo Alto Planning and Transportation Commission sounded the alarm about the loss of grocery stores in the city. As a result, the city says it's going to create a policy specifically designed to retain existing grocery stores and attract new ones, especially those of a smaller to mid-sized format.

Sounds like a perfect opportunity for Tesco's Fresh & Easy Neighborhood Market, doesn't it?

Tesco will be opening 19 (18 confirmed by the retailer, one we recently reported on) small-format, combination basic grocery and fresh foods grocery stores in the Bay Area starting in early 2009. Tesco also is in the process of locating additional Bay Area store sites as we've reported in Fresh & Easy Buzz. Plans are to open far more than 19 Fresh & Easy stores over time in the nine-county Bay Area.

None of the 19 stores thus far are located in Palo Alto. One is located in nearby Mountain View and another in nearby Sunnyvale. Additionally, two thus far will open in San Jose, which is about 30 miles south of Palo Alto.

A piece in today's Palo Alto online, a community online news publication, describes the action the Palo Alto Planning and Transportation Commission said it plans to take to retain existing grocery stores and attract new ones to the city. Among the actions the commission plans on taking is the creation of a brand new zoning regulation, "G" for grocery, which would create land use and other incentives for grocers to locate stores in Palo Alto.

Rumor is Whole Foods Market is currently scouting Palo Alto for sites to open a brand new natural foods store in the city. The current Whole Foods Market store in Palo Alto, one of the retailer's first in the Bay Area, is an older, smaller store compared to today's format. Whole Foods Market, Inc. is in the process of doubling its current San Francisco Bay Area store count of 25 stores over the next three -to- four years.

We've also heard Safeway is eyeing Palo Alto, where Silicon Valley was born in the garage on Addison Street of one of the founders of Hewlett-Packard in 1938, as a possible location for one of its new "The Market" small-format (15,000 -to- 20,000 square feet) grocery stores.

While it's not cheap to buy or lease retail space or to build and take over and renovate an existing building in the upscale city, Palo Alto seems a perfect opportunity for Tesco's Fresh & Easy in our analysis. The stores should appeal to Stanford students and Silicon Valley geeks alike, as well as the many retired people and young professionals in the community. If not, something is wrong.

Additionally, because of Fresh & Easy's small-format design, it would seem to fit perfectly into Palo Alto's ideal for a grocery store: smaller to mid-sized, pedestrian and public transportation-friendly, reasonably priced, and a few other criteria.

What would work in Palo Alto is a grocery store with affordable prices--the upscale Mollie Stone and Andronico's have rather upscale prices as well as products--while still offering a selection of specialty, natural and organic food and grocery items at the same time. Not everybody in the city is rich--there are lots of Stanford students and working people who earn high salaries but pay more than double the U.S. national average in rent for example--but nearly all of Palo Alto's residents are very food literate.