Arizona Region Market Report: First Signs of A Weakening Might Be Starting to Show in the 'White-Hot,' 'Super-Competitive' Arizona Market

Arizona-based Bashas, the state's leading hometown supermarket chain which is in a neck-to-neck battle against Safeway Stores, Inc. for market share dominance, with Wal-Mart closing in on both, recently laid off 100 employees from its corporate office staff in a move the retailer plainly said was designed to reduce expenses.
About two weeks ago, Bashas followed-up this cost-cutting move by announcing it would discontinue its Bashas' Internet-based, home grocery delivery business. In explaining the reason, the Arizona-based supermarket chain, which operates about 160 stores in the state, said since only about 1% (the retailer's figures) of its customers were using the home delivery service, it decided to close it down as another corporate cost-cutting measure.
Internet-based home delivery operations, like Safeway Stores, Inc.'s which will still operate in the Arizona market as it does in California and elsewhere, have seen expenses soar as the price of fuel for the delivery trucks has doubled in just the last year. Gasoline is now over $4 a gallon in most of the Western USA and diesel fuel is at around $5.30 a gallon.
As we've written about often, the Arizona food and grocery retailing market could arguably be the most competitive today in the United States. Arizona, along with just six other states, has the highest percentage of retail food and grocery store floorspace per head of houshold in the U.S.
The market's major players include: Bashas; Safeway Stores; SuperValu-owned Albertsons; and Wal-Mart, with 70 Supercenters and over 20 45,000 square foot Neighborhood Markets--and its soon to be four new 15,000 square foot Marketside food stores--in the state currently, with more stores of all three formats on the way.
The Arizona market's secondary (don't confuse the word secondary with minor though) players include: Costco Wholesale; Sunflower Farmers Markets; Sprouts Farmers Market; Whole Foods Market, Inc.; Trader Joe's; Tesco's Fresh & Easy Neighborhood Market; and numerous high volume independents and ethnic food retailers, which in a state with nearly 40% of the population being Hispanic draw a significant amount of sales from that population base.
Each of the chain retailers above have numerous stores in the state and all are in the process of opening new stores.
Earlier this year, Tesco's head of store location sourcing said he believed there is room for up to 100 new Fresh & Easy small-format, convenience-oriented combination basic grocery and fresh foods markets in the state, on top of the nearly 20 the retailer already has open in the market.
We begged to differ with him then, and still do. In fact, Fresh & Easy Buzz's analysis is that the Arizona market, particularly the Phoenix Metropolitan region where the majority of the state's residents live, is close to becoming overstored.
Combine this current state of food retailing competition in the market with the current poor state of the U.S. and Arizona economy, and we wouldn't be surprised to see some further actions taken not only by Bashas, but perhaps by other food retailers as well, in the market. 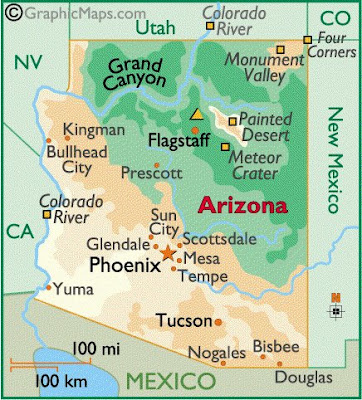 The big food and grocery retailing factor in the Arizona market is Wal-Mart. The mega-retailer, with its current combined food and general merchandise Supercenters, which average about 180,000 square feet, and its 45,000 square foot Neighborhood Market format supermarkets, has been grabbing food and grocery market share from the likes of Bashas, Safeway and Albertsons in the region.

In fact, Arizona has become on of Wal-Mart's top-five per-capita market regions in the U.S., and is one of Wal-Mart USA's key focuses for growth. In addition to more Supercenters and Neighborhood Markets to be opened this year and next in the state, Wal-Mart chose Arizona as the first market to introduce its new 15,000 square foot grocery and fresh foods Marketside format stores.
The first four Marketside stores are set to open this summer in the Phoenix Metropolitan region. All four stores are within a couple miles of existing Tesco Fresh & Easy small-format grocery stores.
Bashas also owns the upscale A.J's Fine Foods chain, which in the past had the specialty and natural foods retailing segment pretty much to itself in Arizona, especially in the Phoenix Metro region. However, that's changed dramatically over the years, as Whole Foods, Sprouts, Sunflower Farmers Market, Trader Joe's and now Tesco's Fresh & Easy (which offers organic and specialty foods, along with fresh, prepared foods and basic grocery items) moved into the market and launched aggressive new store building programs.
Costco Wholesale, which successfully manages to be both a super-popular discount seller of food and grocery products, along with being popular among shoppers for its higher-end choice fresh meats and specialty and natural products selections, also is looking to grow its store count in Arizona.
Costco stores--which sell everything from groceries and fresh foods to car batteries, clothing, books, tires and more--are category killers that take business away from every retail format and operator in a market.
Safeway also isn't backing down in the Arizona market. The retailer is remodeling all of its supermarkets in the state to its Lifestyle format and has recently significantly accelerated its value retailing proposition in the stores like it's doing throughout the U.S. This includes expanding its value-based store brand lines like "Safeway" brand for food and grocery products, Lucerne (dairy products), and the recent creation of a grocery and non-foods product line called "Basic Red," which essentially is a branded generic line designed to go head-to-head price-wise against deep discount store brands such as those at Wal-Mart, Costco and warehouse format stores, along with Fresh & Easy's fresh & easy store brand.
Arizona, like most parts of California, is one of the hardest hit states in the U.S. by the housing foreclosure and credit crisis. Home values are down between 25-40% in the state and the once (just two years ago) booming residential housing industry is at a near-standstill. Unemployment is rising as well.
Combining this sad state of economic affairs for the state with the "white hot," super-competitive" food and grocery retailing competition and massive new store building that's been going on for a couple years in Arizona, and we think something more will give with one or more food retailers in the state before the end is out.
It's difficult for supermarket chains like Bashas, Safeway and Albertsons (the top three in the state) to lay-off store workers because the chains are unionized. Their union contract makes it very difficult to fire store-level employees for cost-cutting measures. That's why in part Bashas laid off the 100 corporate headquarters employees. They aren't unionized. Rather, they are "at will" employees who can more easily be fired for cost-cutting measures.
Still, we know it was difficult for Bashas to fire the 100 employees, as the hometown retailer has a very family-oriented atmosphere both at its corporate headquarters and at store-level with its employees. In fact, the Arizona-based food retailer has very little annual turnover among employees at all.
But, in a poor economy and in a perhaps near-overstored market, something has to give.
We know Tesco chose Arizona, along with Southern California and the Las Vegas Metropolitan region, as one of its three initial target markets for its small-format Fresh & Easy grocery stores because in research the state regularly shows up as one of the best per-capita food retailing markets in the U.S. However, that same research--if one digs a little deeper--also shows Arizona as one of the most competitive food and grocery retailing markets as well.
Perhaps in the long run Arizona will prove to be a wise choice for Tesco? However, we know from sources inside Tesco that Fresh & Easy Neighborhood Market USA's gross margins are running below U.S. food retailing company averages.
As we've reported, sales to date in the 61 Fresh & Easy grocery markets--which we've estimated at the high end of about $100,000 per-store, per-week blended average of all 61 stores--aren't near where Tesco targeted them to be at this point in time, which was close to $200,000 per-store, per-week in average sales.
However, Tesco is still in start-up mode with Fresh & Easy, and thereby willing to lose money. Therefore, we don't anticipate any shake-ups or changes in Tesco's game plan or strategy to open many more Fresh & Easy markets in Arizona.
But in the short to medium run, especially with Wal-Mart's super-aggressive three-format--Supercenters, Neighborhood Markets, Marketside small-format--retail dominance strategy in Arizona, things aren't going to be easy for Fresh & Easy, nor will they be for the region's others food retailers, although they have key advantages over Tesco, the most key being the fact they aren't start-ups in the market, in our analysis.
Arizona is what we call "a key market to watch," both from the Tesco Fresh & Easy perspective, but also from the wider U.S. food and grocery industry perspective. You can count on the fact Fresh & Easy Buzz will be watching, and analyzing, the Arizona market closely.
Posted by Fresh & Easy Buzz at 1:48 PM