Tesco, the Chef, and the Chickens: Hugh Fearnley-Whittingstall Plans to Put Tesco's Chicken Policy Under the Broiler At Upcoming Annual Meeting

Popular British celebrity chef and ethical foods activist Hugh Fearnley-Whittingstall last month bought one share of Tesco PLC stock so he could attend the United Kingdom-based retailers next annual shareholders meeting, which will be held on June 27.

The chef's plan: to author a Tesco shareholders resolution calling for the retailer to create what he and other activists say needs to be a higher ethical standard for chickens sold in Tesco stores.

Fearnley-Whittingstall and fellow British celebrity chef Jamie Oliver have been campaigning in the UK for better treatment of chickens by the nation's farmers, as well as arguing that UK supermarket chains like Tesco, Sainsbury's, who Oliver is the TV pitchman for, Wal-Mart-owned Asda and others should raise their standards for the birds they sell in their stores, which would then require chicken farmers to change their methods because those three retailers are the top buyers of chickens in the UK. In other words, get the retail leaders to change and the others will follow.
The focus of celeb chef Fearnley-Whittigstall's campaign has been to get chicken farmers to increase the sizes of the cages they rear the birds in, but even more significantly and vocally to get them to raise more chickens outdoors, free-range style.
The campaigns of both Fearnley-Whittigstall and Jamie Oliver, have convinced more UK consumers to switch from chickens raised traditionally in small cages to organic and free-range-reared birds. In fact, earlier this year both Sainsbury's and the upscale Waitrose supermarket chain reported sales of free-range chickens were nearing the 50% mark in their UK supermarkets.
But it's Tesco, the UK's largest supermarket chain with a 31% share of the market, that Hugh Fearnley-Whittigstall, chef and animal rights activist, has set his sights on.
Last week Tesco informed shareholder Fearnley-Whittingstall that if he wanted to put his ethical chicken sales shareholder resolution to stockholders at the annual meeting, he would have to come up with ~86,888 British pounds in order to pay for "the cost of distributing the relevant papers to the shareholders."
The celebrity chef and activist initially cried fowl, since Tesco has in the past waved such fees, usually much less by the way, to others wishing to discuss various issues and even submit resolutions to stockholders at the annual meetings.
Fearnley-Whittigstall's discussion and resolution isn't a typical one, as its accompanied by his ongoing campaign to get UK consumers to change Tesco's chicken-selling policy in any form they can, which includes boycotting the stores.
It seems Tesco likely figured the celebrity chef and activist would simply drop the stockholder resolution issue rather than pay the princely sum of ~86,888 pounds.
Hugh Fearnly-Whittigstall almost did just that. Last week he said he had ~30,000 pounds to pay Tesco if they insisted on making him pay, but lacked the rest of the money to meet the ~86,888 total.
However, not one to be placed under a hot broiler by anybody, the chef came up with a marketing and PR brainstorm to raise the remaining amount of money, which is far from "chicken scratch." 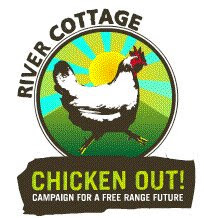 Fearnley-Whittigstall has launched a website named, "Chicken Out; Campaign For A Free Range Future."
On the website, along with all sorts of information about free-range chickens, his ethical chicken campaign, a link to "Chicken Run: The Musical, and even recipes for chicken dishes, the celebrity chef is launching "Hugh's Tesco Chicken Check Out Challenge," which includes an online fundraising campaign to help him obtain the remaining ~56,888 pounds he needs to add to his ~30,000 to pay Tesco's ~86,888 fee in order to get his resolution before the retailer's stockholders at the June 27 meeting just three weeks from now.
The chef is using an online auction system to raise the money from supporters or just those who want to do something with Hugh. For example, there's an online auction item for a chicken dinner with Hugh. Starting bid: ~5,000 pounds.
There's a day at Fearnley-Whittigstall's River Cottage chicken farms with Hugh and the chickens, which currently has a bid of ~3,000 pounds and is still being bid on.
There's "Dinner Ahoy: You hook 'em, we cook 'em," in which Hugh and his team will take seven people out on a fishing boat, then cook the fish for the group back at River Cottage Farms. Current bid: ~1,800 pounds.
That's just a few of the creative items the celebrity chef has up on the website for auction. You can view these items and all the others on the website here.
We have a feeling the chef-activist will raise much more than the ~56,888 pounds needed to pay Tesco its ~86,888, minus the ~30,000 pounds Fearnley-Whittigstall says he has out of his own pocket to pay. Although we have it on good authority the well paid chef could write a check for the full amount easily.
But that looks to be the point of the website scheme; as any monies over that amount will go to his campaign to convert the UK's chicken-producing industry to a free-range one. We're told ~6,000 pounds has already been pledged just today on the website.
By telling the celebrity chef he must pay the ~86,888 pounds to get attention at the annual meeting for his ethical chicken-selling resolution, the Tesco has handed Fearnley-Whittigstall a million dollar angle for his overall free-range chicken campaign, and the ability to garner more publicity and raise more money than he and his fellow activists could ever have done without Tesco's help.
Tesco's position on the chef-activist's resolution and campaign to get the retailer to change its chicken procurement and selling policy is that the company has a fine and reputable policy in terms of the chickens it sells. The retailer says Fearnley-Whittigstall is essentially using the campaign against Tesco for publicity, which he denies. He says he simply wants the nation's leading retailer to change so that others--including chicken farmers--will follow. The chef's ultimate goal is to have as many UK farmers raising free-range birds as he can, he says.
Tesco has yet to make a statement of any kind regarding the chef's website or aonline fund-rasing auction.
"Tesco is the biggest retailer in the country and they can make the biggest difference to the lives of hundreds of millions of chickens. And so I’m determined, along with my fellow supporting shareholders and Chicken Out campaigners, to pursue this resolution," Fearnley-Whittigstall said today. " So I’m putting my money where my mouth is to take this issue all the way to the Tesco AGM (the stockholders meeting) on June 27.”
It should be an interesting annual meeting on June 27.
Posted by Fresh & Easy Buzz at 6:44 PM