Along with such nuts and bolts discussions about sales and profits, the UK and world's ailing economies, growing competition from discounters at home like Wal-Mart's Asda and the German fighting tigers, small-format, no frills discount grocers Aldi and Lidl, numerous shareholder resolutions were discussed and voted on at Friday's AGM.
Tesco PLC shareholders passed every one of those resolutions accept one--celebrity chef and animal rights activist Hugh Fearnley-Whittingstall's chicken welfare shareholder resolution, which also just happend to be the one resolution among the many voted on Friday that received the most attention, focus and publicity in the UK and abroad. 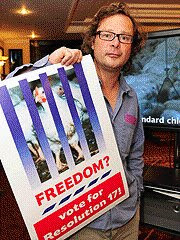 The shaggy-haired and increasingly influential UK chef and activist (pictured at left) raised the fees required of him by Tesco to place his chicken welfare resolution, which if passed would have required Tesco to change its broiler chicken procurement and selling policy in the direction of selling more free-range birds, and less chickens raised in small or battery-type cages.