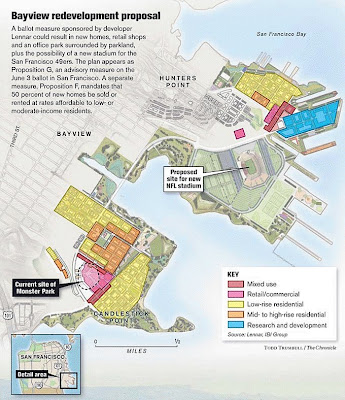 The details--and the future--of Florida, USA-based Lennar Corp's. massive mixed-use development, detailed in the graphic above, will be voted on by San Francisco voters on Tuesday. Click her to view a larger version of the graphic.

After decades--some locals even say a lifetime--of neglect by the city, developers and the business community, San Francisco's Bayview-Hunters Point neighborhood--where Tesco is building a new Fresh & Easy grocery store which will be the retail anchor of a brand new residential condominium complex--is suddenly being flooded with local government and commercial attention.

[You can read more about the Fresh & Easy grocery store going into the Bayview-Hunters Point development in our March 13 piece, "San Francisco: Cool Bay Breezes, A City Full of History--And A Fresh & Easy State of Mind," here.]

Bayview-Hunters Point, a historically African American neighborhood, has its growth origins in World War II when the U.S. government developed the now-closed naval shipyard on the waterfront in the neighborhood. The Hunters Point facility was one of the most productive ship-building facilities in the United States during the war effort, drawing thousands of workers from throughout the country to work at the shipyards, many who remained in the neighborhood after the war ended.

That majority home ownership trend began to change dramatically in the 1960's due to a variety of circumstances. In the 1960's and into the 1970's the city of San Francisco built numerous public housing developments in Bayview-Hunters point as part of then President Lyndon Johnson's war on poverty. At the time, the neighborhood was majority African American.

Throughout the 1960's and into the present, poverty in the neighborhood grew a bit, stayed the same a lot, but hasn't improved percentage-wise. The "projects" as they are called remain, although the city no longer builds large-scale "poor people only" public housing projects in the neighborhood any longer.

Today, there still is a substantial African American population in the neighborhood--many of whom are the original homeowners or their children--along with many also living in the housing projects, and still others who are renters.

The demographic makeup of the neighborhood has changed much though. Hispanics or Latinos comprise a growing number of Bayview-Hunters Point's residents today. Additionally, there's been growth in the white and Asian population, as young San Franciscans have and are moving into the neighborhood since it's the most affordable district in a completely unaffordable for housing city.

San Francisco's current mayor, Gavin Newsom, made improving Bayview Hunter-Point a major element of his campaign when he ran and was elected mayor of the City by the Bay. Since getting elected, Newsom has devoted more personal and city effort to the neighborhood--including redevelopment efforts--than all of the city's previous mayors have. His success is mixed however, according to neighborhood leaders and city hall watchers in the city.

This effort includes working with commercial and residential developers and the business community--before being elected mayor, Newsom was an entrepreneur who owned a chain of successful restaurants in the city, along with a winery in the Napa Valley--to create new housing and commercial developments--and jobs--in Bayview-Hunters Point.

One of those developments is the large mixed-use retail and residential development--of which Fresh & Easy will be the ground floor retail anchor--on San Francisco's Third Street in Bayview-Hunters Point. As part of the city's and neighborhood's agreement with the developer, a portion of the condominium units in the building must be sold at below market rate prices. Current residents of the neighborhood also get priority in buying or renting the units as part of the agreement.

Since the early 1990's, a coalition of Bayview-Hunters Point community groups and the city has been trying to lure a grocery chain into opening a supermarket that offers basic groceries and fresh foods at affordable prices into the neighborhood. The only current such supermarket is a Kroger Co.-owned Foods Co banner warehouse store which has to serve tens of thousands of neighborhood residents and is at one complete end of the neighborhood, making a trip to that store from the other end of the neighborhood a long one for residents, many of who use public transportation.

Tesco's Fresh & Easy Neighborhood Market was the first grocer to say yes to the city and neighborhood coalition when it decided to build a new store inside the new Third Street project currently being constructed.

On Tuesday, San Francisco voters will go to the polls in a special election which among other ballot measures includes to competing ballot initiatives--Propositions G and F--regarding a massive residential development for Bayview-Hunters Point proposed by Miami, Florida-based residential developer Lennar Corp.

The development not only includes Bayview-Hunters Point but nearby Candlestick Point as well, which is where the San Francisco 49-ers' football team's 'Monster Stadium is located. There has been discussion about the development including a new stadium for the football team, which is threatening to move south to nearby Santa Clara if one can't get built in San Francisco. [The Bayview and Hunter's Point neighborhoods are technically two separate neighborhoods located side-by-side. However, everybody in San Francisco, including the city most of the time, includes them together as Bayview-Hunters Point.]

Two Bayview-Hunters point neighborhood groups, Bayview ACORN (Association of Community Organizations for Reform Now) and SFOP (San Francisco Organizing Project) have signed a Community Benefits Agreement with developer Lennar which guarantees a certain percentage of housing in the development will be sold at below market rate, that neighborhood residents get priority in buying and renting the new housing, that the developer will hire and train a certain percentage of neighborhood residents to build the development, and a number of other conditions in return for the coalition's support of Propostion G and the developer.

Proposition F on the other hand is being supported by other Bayview-Hunters Point neighborhood groups who don't feel the Community Benefits Agreement offers enough to neighborhood residents. Proposition F gives the neighborhoods more control over the development and requires the developer to set aside more jobs for Bayview Hunters-Point residents, offer more units at below market-rate cost, and spells out a number of other criteria.

A number of San Francisco faith or religious organizations also are supporting Proposition F, as is a powerful member of the city's Board of Supervisors, and numerous other community groups and organizations.

The Tuesday election on the development is splitting longtime Bayview-Hunters Point residents down the middle, according to San Francisco political analysts.

Today's San Francisco Chronicle has a piece for example in which it describes one such split between two African American woman, both who have lived in the neighborhood for over 50 years each respectively.

The coalition between labor (the building trades union) and business (the Chamber of Commerce) is also an odd and unique one in San Francisco politics. Historically, labor and business in the city are nearly always at opposite sides of any political issue or ballot measure.

Read their Op-Ed piece, "Labor and business urge yes on G, no on F," here.

Two important leaders of the "Yes on F, No on G" campaign, Bayview-Hunters Point resident and coalition for Proposition F leader Joanne Abernathy, and Bishop Ernest Jackson, director of a nearby neighborhood outreach center and a affordable housing developer in the city, co-authored their own opinion piece arguing in favor of Proposition F over Proposition G, which they say (Prop. G) is a far more neighborhood-oriented measure.

No shortage of 'coalitions' on either side

Meanwhile, two longtime Bayview Hunters Point residents and members of the neighborhood coalition that signed the Community Benefits Agreement with the developer Lennar Corp., say they want San Francisco voters to know all neighborhood residents and groups aren't opposed to Proposition G and in favor of Proposition F.

These two neighborhood leaders, Jackie Phillips and Eleanor Williams, co-authored a pro-Proposition F piece in that same Friday edition of the Chronicle titled, "What the Bayview community wants," which you can read here. In the piece they explain the Community Benefits agreement signed with the developer and argue why they support Proposition G.

Welcome to San Francisco politics. This is the norm in the city rather than the exception.

Food retailing and the neighborhood's future

If Proposition G (the developer measure) passes over Proposition F, which is a toss-up at this point in time according to San Francisco political analysts, that means the huge mixed-use development would go forward theoretically as planned, meaning thousands of new residents, new industry and retail, as well as new jobs.

If Proposition F passes, Lennar Corp. says it likely will scrap the project, although many analysts in San Francisco say that might not be the case as the opportunity would still remain a lucrative one for the developer.

If the huge mixed-use development goes forward in the neighborhood as planned--or even if a scaled-down version goes forward--that would mean thousands of new potential customers for the Fresh & Easy grocery store set to open on Third Street and Carrol Avenue in Bayview-Hunters Point, on top of all the residents who already live in the neighborhood and those who will live in the condominiums above the new store when it opens next year, which is currently underserved by grocery stores.

Ironically, if such a massive development like Lennar's does go forward, which is likely in one form or another, it will probably draw other grocery chains to open stores in the neighborhood, such as locally-based Safeway Stores, Inc., which has a store (about 12 units total in the city of 825,000 residents) in pretty much every San Francisco neighborhood except Bayview-Hunters Point.

Anything that hinges on a 49er stadium is vapours. They've been talking that one up and showing art and scale models for over a decade.

Bayview-Hunters Point is going to go upmarket like the rest of the city. Even though it's a low income neighborhood, a simple one bedroom apartment still goes for about $1,400 a month in the neighborhood.

The new condos and apartments will go for 2 grand a month for a one bedroom.

Some residents will get the low-income units but basically what will happen is that most will move from the neighborhood out to the far east Bay like has been happening for years.

San Francisco is a city now of rich, high-income professionals who spend every cent they have, and the poor on assistance.

I love it; but it's getting harder to remain.

There's been talk by the way of Whole Foods putting a store in the Lennar development. If that happens, you will know the neighborhood is changes forever, as you put it. Not saying is bad or is good, just changed.

Why is the new stadium idea or prospect "vapours" or not feasible in your opinion?