Tesco Fresh & Easy Neighborhood Market CEO Tim Mason 'Shows A Little Leg' in Interview With the Financial Times; What About the Ankle? 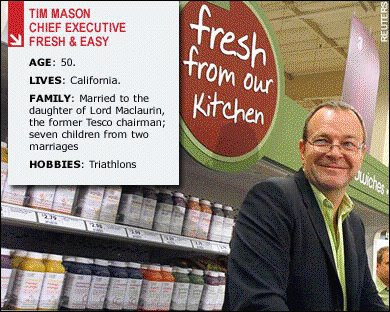 Fresh & Easy Buzz Editor: Since early this year, Fresh & Easy Buzz has been suggesting Tesco Fresh & Easy Neighborhood Market CEO Tim Mason get out from behind his desk at corporate headquarters in Southern California--both physically and metaphorically--more often and talk more to the press and others about who he is and about his goals for Fresh & Easy in America. Or, as our British friends like to say..."Show a little more leg."

Fresh & Easy Buzz has been told by two sources in positions to know that Mr. Mason has a tattoo of the Fresh & Easy clock, which is part of the retail chain's logo as you can see in the graphic above, branded on one of his ankles in the form of a tattoo, in order to express his brand marketer's dedication to the brand and the mission. We're told the grocery chain chef even showed the tattoo to Fresh & Easy Neighborhood Market headquarters employees at a staff meeting. Mr. Mason was head of marketing for Tesco PLC in the UK before coming to America to head up Fresh & Easy.

Vegas Fresh & Easy stores continue to open and it appears to me to be a strategy with no merit, for an idea with no currency.

Fresh & Easy fills no void in the Vegas market. Indeed, there is no paucity of retail stores carrying a much wider selection 24/7.

I can't think of any reason to go back to a Fresh & Easy. I've been twice and it was a waste of time. Why would a saavy retailer open a store directly across the street from a Walmart neigborhood market, which carries a greater selection at lower prices?

My time is important and I won't be spending at Fresh & Easy. It's time to pull the plug on this disaster.