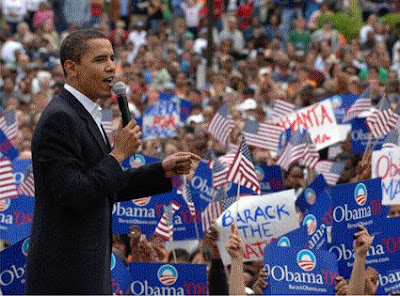 ..."I have a dream that my four little children will one day live in a nation where they will not be judged by the color of their skin but by the content of their character."-- Martin Luther King, Jr., from his famous "I Have A Dream" speech, August 23, 1963. Dr. King gave the speech on the steps of the Lincoln Memorial in Washington, D.C. You can read the full-text of the speech here.

The Associated Press (AP) is reporting Democratic candidate for President Barack Obama has cinched his party's nomination for President of the United States.

According to the AP, Senator Obama now has obtained enough delegates to put him over the top in the delegate count to beat out fellow Senator and former U.S. First Lady Hillary Clinton for the nomination. This is even before the results from today's primaries in South Dakota and Montana have come in, which will happen later tonight. Even if Obama were to lose both states by a substantial margin tonight, he would still cinch the nomination, according to the AP report.

You can read the Associated Press' breaking news report here.

First-term Illinois Senator Barack Obama becomes the first African American in the history of the United States to be nominated for President by his political party.

It was another man from Illinois, Abraham Lincoln, who abolished black slavery in the United States while he was President. The poignancy of Senator Obama being the Senator from Illinois is striking in that regard.

Obama, 46, the son of a white mother from Kansas in America's heartland and a father from Kenya in Africa, took a long journey to become not only a politician but now his party's nominee for the highest office in the United States.

Raised by his mother and grandparents in Hawaii, Kansas and for even a time in Indonesia, Obama says he didn't want to be President as a child or even a teenager. Rather, what he says he wanted most was to know his father, who left the family shortly after Barack was born. Senator Obama did eventually get to know his father better, but not personally. Rather, he did so by researching and writing his best selling book, "The Dreams of My Father."

You can learn more about Barack Obama's life story and biography here.

Forty years ago in 1968, civil rights leader Martin Luther King Jr. was gunned down by a sniper as he relaxed on the balcony of the Lorraine Hotel in Memphis, Tennessee.

Campaigning for the Democratic Party nomination for President that very day in 1968 in Indianapolis, Indiana when he heard the news of King's death, Robert F. Kennedy, who many say Barack Obama reminds them of in some ways, waded out into a crowd of mostly African American voters who thought they were at a rally to hear a political campaign speech from the Senator, brother of the late President John F. Kennedy, civil rights leader, and Democratic candidate for President that year.

Instead, Robert F. Kennedy broke the news to the largely African American group that Martin Luther King Jr. has been assassinated in Memphis and had died just a short time earlier.
There was widespread fear in Indianapolis that evening riots would break out. However, Robert F. Kennedy gave a speech to the group without notes, talking about what he felt like that night, telling the crowd what it was like to have a brother (JFK) shot down just a few short years earlier in the same way a sniper ended King's life that very day.

In his speech to the grieving Indiana residents, Robert F. Kennedy evoked the words of his favorite poet, Aeschylus:

"Even in our sleep, pain which cannot forget falls drop by drop upon the heart, until, in our own despair, against our will, comes wisdom through the awful grace of God."

Later that year (1968) Robert F. Kennedy--like his brother John before him and his friend Martin Luther King Jr. (as well as Abraham Lincoln)--would have his life come to an abrupt end when he was shot by a sniper at the Ambassador Hotel in Los Angeles during the celebration of his winning the California primary in his quest to be the 1968 Democratic nominee for President.

You can read the entire Indiana speech by Robert F. Kennedy, and even listen to it if you like, here.

The poignancy of Barack Obama's becoming the first African American to be nominated by his party for President coming on the 40th anniversary of the death of America's leading civil rights leader, Dr. Martin Luther King, along with the same year anniversary of Robert F. Kennedy's death is equally striking

Regardless of ones political affiliation--Democrat, Republican, Libertarian, Independent or decline to state--Obama's cinching the nomination is a cause to celebrate as America.

Through decades of pain and suffering, America has gone from a nation which enslaved people because of the color of their skin, then denied them the vote, decent jobs, housing and other basic rights, to tonight when an African American man with what he calls the unusual name of Barack Obama, will stand on a stage in St. Paul, Minnesota, where the Republican Party will hold its convention later this summer, and perhaps announce he is proud and humbled to be the Democratic nominee for President of the United States of America.
Posted by Fresh & Easy Buzz at 3:54 PM