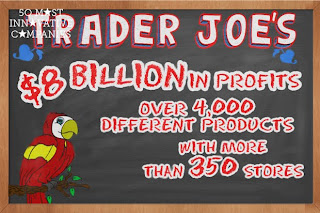 Here's what Fast Company says about the Monrovia based Trader Joe's in awarding it at the top of its list as a global innovator:

"Though Trader Joe's masquerades as a neighborhood store, it boasts $8 billion in annual profits. Its stores carry 4,000 different products, compared to typical grocery stores' 50,000. This meticulous stocking helps it sell $1,750 per square foot - twice as much as Whole Foods. Trader Joe's brand-name products offer low prices and 'pizzazz beyond plain old corn flakes,' says analyst Bob Goldin. It's a company that manages to borrow from the best of its competitors, with more than 350 stores compared to Whole Foods' 300."

Trader Joe's operates about 350 stores and has estimated annual sales of $8 million. There are 169 Fresh & Easy Neighborhood Market stores with sales estimated by Fresh & Easy Buzz of about $800 million. In October 2010 Tesco reported mid-fiscal-year 2010/11 year sales of $388 million for Fresh & Easy. [See - October 5, 2010: Philip Clarke's Early Welcome to America: Tesco Logs $151 Million Half-Year Loss For Fresh & Easy Neighborhood Market.] Tesco's 2010/11 fiscal year ended at the end of February 2011. It reports its preliminary financial results in April 2011. Our about $800 million in sales estimate for the year is based on the mid-year numbers and our research.

Trader Joe's, which is privately-held and owned by a trust in Germany set up by the late Theo Albrecht (he died in July 2010) for his children, has been around for 30 years. Tesco's Fresh & Easy is only a little over three years old. Therefore we aren't suggesting Fresh & Easy Neighborhood Market, which does have average store sales that are considerably below the U.S. grocery retailing industry standard, should be on par with Trader Joe's from a store-count-to-sales perspective.

Rather we use the example for two reasons, which are: To highlight the exceptional performance of Trader Joe's vis-a-vis a very similar format, Fresh & Easy, and to illustrate how far Tesco has to go with Fresh & Easy to even come close to doing 50% of what iconic Trader Joe's does in sales, let alone in profit. (See the October 5, 2010 story linked above for Tesco's mid-year loss with Fresh & Easy.)

Innovation in food and beyond

Trader Joe's is one of just two grocers to make the Fast Company 50 list. The other food and grocery retailer is United Kingdom-based Marks & Spencer, which came in as the 36th most innovative company in the world out of the 50 named by the magazine this year.

In the "food" category, which mixes retailers, food-makers, restuarants and other food-related companies all together, Fast Company named 10 innovators. Three of the ten - number one (in the food category) PepsiCo , Trader Joes and bean-to-bar chocolate-maker Madecasse (number three in the food category) - ranked in the overall 50 most-innovative companies ranking.

The other seven food innovators named are:

>04 / Cargill
For charging into the sweetener market with a plant-based product that's aims to be eco-aware and health-friendly. The agricultural giant has perfected a process to grow and refine sweet leaf extracts from stevia, a type of South American plant, allowing it to quickly command a sizable slice of the faux-sweetener market.

>05 / Foodhub
For creating an online tool to connect local food producers to food buyers big and small. Think of FoodHub as the Match.com for the locavore movement. Wholesale food buyers log on to access thousands of small and regional producers, as well as info on varietals sold, minimum orders, insurance, and delivery options. Launched by environmental not-for-profit Ecotrust, FoodHub has already signed on hundreds of Portland restaurants, grocery stores, and businesses and expanded to neighboring states.

>06 / Current Energy
For greening restaurants (and saving them money in the process). Fast food eateries such as Jack in the Box and Qdoba are turning to this Dallas-based energy firm's smart sensors to majorly slash their energy use (and costs). For instance, sensors can ping restaurant managers with text messages if a walk-in refrigerator is left ajar for too long, or coordinate pizza-oven temperatures based on real-time sales.

>07 / Chipotle
For boldly taking advertising in-house. After burning through four ad agencies in five years, the burrito mecca took on its own advertising, including replacing wacky promotions with on-message marketing. For instance, "Boo-rito" giveaways for Halloween were replaced this year by a campaign to promote how truly scary other fast food is, with sales of discounted meals going to support Jamie Oliver's Food Revolution.

>08 / McDonald's
For changing the way we think about the most iconic restaurant in the world. With a $2.4 billion budget, McDonald's is launching its first total makeover campaign since the Carter administration, redoing at least 400 domestic outposts, refurbishing 1,600 restaurants abroad, and building another 1,000.

>09 / Bolthouse Farms
For its ambitions to double the $1 billion baby-carrot business by using junk food tactics. Jeff Dunn has tapped his past as a Coca-Cola exec to goose baby carrots from a flat industry to a hotly marketed snack food, from adrenaline-fueled ads (think: Mountain Dew) to snazzy grab-and-go bags (think: Doritos).

>10 / Max Burger
For being the first carbon-footprint fast-food chain. Calories printed on fast-food menus seems downright quaint compared with Max Burger, which is one of the first burger chains in the world to print the carbon emissions of each sandwich right alongside its cost.

You can view the entire list and details of Fast Company's 50 most innovative companies in the world here.

In our analysis, Trader Joe's, Whole Foods Market and Wegmans are currently the three most innovative food and grocery chains in the U.S. Close behind in our analysis is Texas-based H-E-B and the fast-growing natural foods chain Earth Fare, which is based in North Carolina. There are a number of other food retailers neck-to-neck in terms of innovation though. But key is looking at overall innovation, across everything a grocer does. That's our criteria.

If you expand that universe to the entire world, it makes picking a top three much more difficult. For example, United Kingdom-based Marks & Spencer, which Fast Company included as the 36th most innovative company for 2011, is one of the world's most innovative, as is fellow British grocery chain Waitrose, to name just two.

The global small-format, hard-discount chain Aldi, which is headquartered in Germany, has to be on any short list when it comes the world's most-innovative food and grocery retailers as well, in our analysis and opinion.

And Walmart is fast-moving up in terms of innovation because of its green, organic and health initiatives, its multi-format and multi-channel retailing strategy - huge stores, medium-sized stores and small-format stores, along with Walmart.com - along with a number of other initiatives.

In terms of picking one grocery chain, we really can't argue with Fast Company's choice of Trader Joe's, although if the magazine had chosen Whole Foods, which has been named by Fast Company in its ranking in the past, or Wegmans (and perhaps Aldi), we wouldn't put up much of a fight either, as we think all have very high levels of innovation.

But looking at performance - those amazing sales-per-square-foot numbers Trader Joe's turns in, for example - and profitability, if push came to shove and we had to pick one out of our top three, at this point in time we too would choose Trader Joe's. The grocer is not only innovating strongly but it's firing on all cylinders in everything it does (that overall crieteria we noted earlier), from operations and customer service to private brand development, merchandising and marketing.