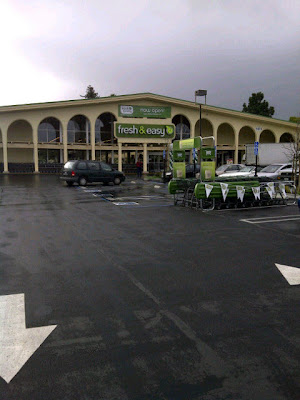 The photograph of the Fresh & Easy store (above) in the Willow Glen shopping center in San Jose was taken by Tesco deputy CEO and Fresh & Easy Neighborhood Market CEO Tim Mason this morning, using his Blackberry. The store opened at 10 a.m. today.

Tesco's Fresh & Easy Neighborhood Market opened its first two stores in Northern California today, three-plus years after announcing it acquired the two locations, along with 35 others, in January and February 2008.

Fresh & Easy Neighborhood Market has formally designated the San Jose store in the Willow Glen Village shopping center as its "first" Northern California store - the Danville market being its second - even though both stores opened at 10 a.m. today. (See the link at the end of this story for a profile of the store.)

"As a Willow Glen native, it is my pleasure to welcome Fresh & Easy to our neighborhood," Councilmember Pierluigi Oliverio said at the store's grand opening this morning. "Not only is Willow Glen home to a new grocer, the overall shopping center [Willow Glen Village] is gaining a strong anchor tenant which will revitalize the area."

The mayor commented during the grand opening ceremony about his city getting "first Fresh & Easy store status," saying: "I'd like to thank Fresh & Easy for opening their first Northern California store here in San Jose. It's been a pleasure working with Tim Mason and his team over the past two years and we look forward to helping them open many more new stores throughout the city. We appreciate their investments in San Jose and their commitment to providing fresh and affordable food for our residents."

Fresh & Easy Neighborhood Market CEO Mason, who was busy multi-tasking this morning (see the photo at top), gave the official store-opening speech, along with welcoming those in attendance, saying, among other things "We opened our first stores in 2007 with the goal of creating a modern, 21st century grocery store." Fast forward to today, and we have 166 stores and more than 4,500 employees. We know our fresh prepared meals, our less processed foods and our very competitive prices will be very well received by Northern California shoppers. Today marks another significant step for our business and we couldn't be more excited."

Throughout the day a steady stream of shoppers attended the San Jose Fresh & Easy store's grand opening, at times packing the aisles deep and wide. One shopper described the store to us in an e-mail as being a "madhouse" when she was there in the late morning/early afternoon. For a grocer, the term madhouse has very positive connotations, particularly if and when it goes beyond opening day.

The Danville store grand opening also was well attended.
According to Art Armstrong, who arrived at the store at 9 a.m this morning, an hour before the doors opened, there were close to four dozen people waiting to enter the Danville Fresh & Easy store at 9:50 a.m, which is when the grand opening ribbon-cutting was going on outside.

Karen Stepper, the mayor of Danville, participated in the ribbon-cutting. John Wright, the manager of the store was in-charge of the overall grand opening ceremony and activities today.

Armstrong, who lives not far from the store, said the crowd at the Danville Fresh & Easy market was strong during the time he was there. "The store was packed solid with people for the entire 1.5 hours I was there," he says. "I would say easily 70-80 people constantly."

Offering his impressions of the store and opening day, Armstrong says: "The highs for me are the product availability and the location. The lows are the cramped feeling of the store. But that may be a product of how busy it was opening day. It was well lit and much nicer inside than the facade of the building would lead you to believe. All the shoppers seemed very excited and commented about the prices. There were so many people that the checkout line extended 3/4 around the perimeter of the store. Thank goodness for checkout staff to help as it only took me about 15 minutes to traverse the length."

Armstrong added this, saying it's something he hopes Tesco's Fresh & Easy fixes: "On the subject of [product] stock, one annoying aspect was the expiration dates of the [fresh-prepared] foods. Everything that was pre-prepared [ready-to-eat/ready-to-heat] had an expiration date of 3/5 to 3/8. Maybe it's just me, but that seemed like a close window considering those dates were only 3-6 days away. At least they didn't expire tomorrow."

Whenever is opens a new store, Fresh & Easy Neighborhood Market makes a $1,000 donation to a local non-profit group. Today the grocer donated $1,000 to San Jose's Sacred Heart Community Service organization and $1,000 to the Danville Sea Devils.

I checked out the Willow Glen store today, with my Mom, around 3:15pm, it was, as you had mentioned someone else said, an absolute madhouse, but I have to say I'm thrilled with it - we had another market open in the neighboor about six months ago and it was a bit of a disappointment, so for Fresh & Easy to finally be open and have such a good selection at reasonable prices is really exciting.

Considering the next closest resonably priced market is probably 10 mins away and in a rather inconvenient location, I expect this store to see a huge amount of business. Hopefully that will spur them on to open the Almaden Rd. and Curtner store as well!