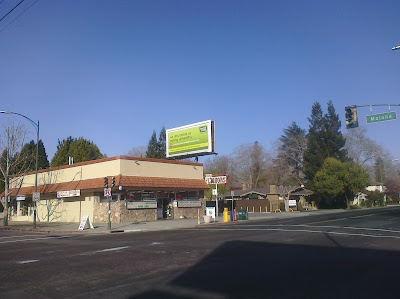 The billboard (pictured at top), which is located at Malone and Lincoln a little more than a mile away from the Fresh & Easy store in San Jose's Willow Glen Village shopping center, and went up on or shortly after March 2, features the tag-line: "As affordable as eating unhealthy."

The Willow Glenn-San Jose neighborhood billboard is of the same style Fresh & Easy uses in its other markets - Southern California, the Fresno and Bakersfield regions in California's Central Valley, metropolitan Las Vegas, Nevada and metro Phoenix, Arizona. All of the billboards have the same design and feature different "one-liners." For example, the billboard pictured below, which is in Southern California, offers one of the other tag-line versions. 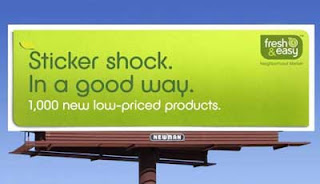 The location of the billboard, which is the first one we've spotted so far in Northern California, is a gateway entrance to the Willow Glen neighborhood from the south. The intersection is well-traveled by automobiles, which means it's a highly-visible spot for the outdoor advertisement for the Fresh & Easy market a little over a mile away.

The "As affordable as eating unhealthy" tag-line is an interesting one in light of the fact the billboard looks down on a liquor store, Lincoln Liquors, as you can see in the photograph at top. That's not to suggest all of the adult beverages offered for sale in the liquor store aren't "healthy." Red wine and beer, for example, are universally considered to be "heart healthy" drinks, if consumed in moderation. The billboard's looking down on the liquor store does offer added meaning to the tag-line though, in a symbolic way.
Posted by Fresh & Easy Buzz at 8:05 PM