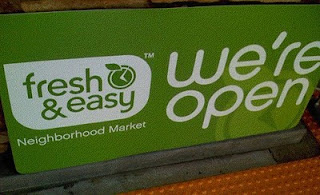 The two stores, in the East Bay Area city of Concord (at Clayton & Ygnacio Valley Road) and at 615 Elmira (Elmira & Nut Tree) in Vacaville, which is midway between the Bay Area and Sacramento, are Tesco's fourth and fifth Fresh & Easy markets in Northern California and the grocer's first in each of the two respective cities.

Both stores opened at 10 a.m. this morning and held grand opening celebrations all day.

Ryan Gizdich, the store manager at the Vacaville Fresh & Easy market, told Fresh & Easy Buzz that a good crowd of people showed up for the grand opening this morning and that business was steady for most of the day.

Another Fresh & Easy Buzz correspondent who was at the Concord opening reports that shoppers and the mere curious started flowing into the store when the doors were opened at 10 a.m.

Tesco's Fresh & Easy, which now has 169 stores in California, metropolitan Las Vegas, Nevada and metro Phoenix, Arizona, has so far this year opened five of its fresh food and grocery markets in California.

The Northern California store openings continue next Wednesday (March 23) when Fresh & Easy opens two stores - one at Ygnacio Valley Road & San Carlos Road in Walnut Creek, which is next door to Concord, and another unit at Oakdale Road & Lancey Drive in Modesto, which is in Stanislaus County in the Northern Central Valley. Modesto is a little over an hour's drive from Walnut Creek and Concord.

Following the two store openings on March 23, Tesco's Fresh & Easy Neighborhood Market has four stores scheduled to open in April - one unit on April 13 and three stores on April 27. The stores, locations and opening dates are:

Fresh & Easy Neighborhood Market CEO Tim Mason didn't make it to the Concord and Vacaville store openings today, like he did on March 2 when he opened the San Jose store in the Willow Glen Village shopping center, because he's currently at Tesco's global headquarters in the United Kingdom.

Mason, who this month was given the added title of Tesco group deputy CEO, reporting to new Tesco CEO Philip Clarke, also was given, in addition to his position running Fresh & Easy USA, a couple added responsibilities for Tesco's global operations. The two areas of responsibility are for Tesco's corporate branding and its climate change initiatives.

In addition to meetings with Tesco CEO Clarke, who took over in early March from Terry Leahy who retired, and others at UK corporate headquarters, We've learned Tim Mason met yesterday in London with representatives of three of Tesco's marketing/advertising/communications agencies - EHS, RBR and DHA - and today visited Tesco stores and those of its competitors, including a Sainsbury's supermarket in Stanway, UK.

Back in America, in the Northern California cities of Concord and Vacaville specifically, Tesco's Fresh & Easy held a variety of events throughout the day, as it does with all of its new store openings, to welcome shoppers to its two newest stores in the region. Those events included food sampling, music and in-store contests. Free reusable canvas shopping bags were also given to shoppers who bought $10 or more worth of groceries today.

December 27, 2010: First Look at the Pacifica, California Fresh & Easy Neighborhood Market Store, One of the First Opening in Northern California in Early 2011
Posted by Fresh & Easy Buzz at 7:58 PM