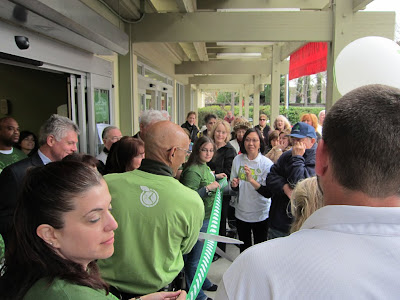 Grocery Store Openings as Theatre: Why Not?

One of the few business sectors that's continued growing substantially in California over the last three-plus recessionary years is the food and grocery retailing industry.

Despite high unemployment (12.4% statewide in February; a slight improvement over January), severe under-employment and various other less-than-stellar economic indicators which continue to afflict the Golden State, food and grocery retailers of all formats, sizes and ownership structures continue to open new stores in California, which has nearly 40-million residents, all with stomachs to feed and pantries in need of stocking on a regular basis.

And in these less-than-stellar economic times, grocery store openings have become a form of free entertainment for many California residents, including the millions who are unemployed and have extra time on their hands, along with the many cash-strapped bargain hunters looking for freebies and hot opening day deals, who perhaps even if they can afford it would rather check out a grocery store grand opening instead of forking over big bucks to see an afternoon movie matinee. Then, of course, there's the just plain curious - those folks who regardless of their economic situation just love to check out anything new - including the opening of a new grocery store. 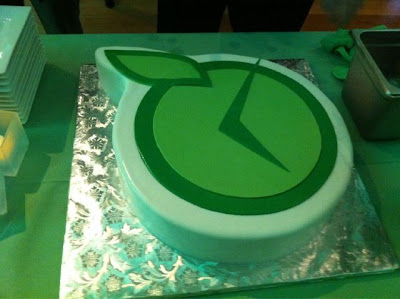 Tesco's Fresh & Easy baked cakes in the design of its clock logo, which it calls a clapple, for the grand openings of its first two stores in Northern California.

A Fresh & Easy Buzz correspondent visited the San Jose store in the Willow Glen Village shopping center on Friday morning at 11 a.m. and said business inside the store was fairly brisk. 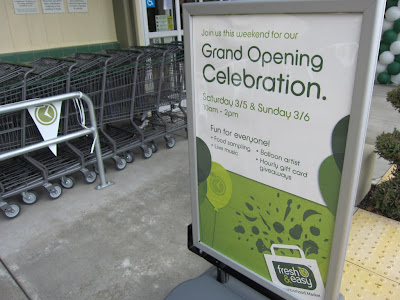 Another Fresh & Easy Buzz correspondent visited the Danville Fresh & Easy market on Saturday afternoon, reporting that it was busy during the time he spent touring and observing inside the store, which was holding various extended grand opening events, such as those noted in the sign located near the entrance, pictured above.

Two weeks earlier, on Wednesday, February 16, 2011, Whole Foods Market opened its newest store, in San Francisco's historically famous Haight-Ashbury neighborhood. In addition to a jam-packed grand opening day on the 16th - which was more like a "Human Be-In" than a grocery store opening - in which Whole Foods featured a myriad of activities, starting with its traditional bread baking store opening ceremony in the morning, the grocer actually began its grand opening festivities (pre-grand opening) in the parking lot a week before the new market opened. 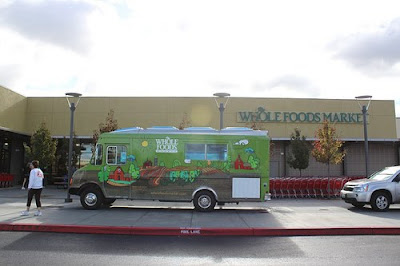 Whole Foods' Northern California division kicked off the store's pre-grand opening on February 9, when it had its very own Whole Foods Market Taco Truck (pictured above) in the parking lot of the then yet unopened store on Stanyan and Haight, offering grilled cheese sandwiches and soup for sale at discount prices, along with handing out promotional information and free coupons for the store opening.

On February 12 and 13, Whole Foods once again utilized the parking lot of the unopened store to sell a variety of fresh flowers and rose bouquets in advance of the February 14 Valentine's Day holiday and store's opening on February 16. The grocer donated 25% of the day’s flower sales to the neighborhood-based Grattan School’s Edible School Garden project.

The event, which Whole Foods Market sponsored and invited neighborhood residents to attend from 11 a.m. to 4 p.m., featured ethnic foods made and sold by La Cocina, a local non-profit business incubator program for low-income food entrepreneurs, and an assortment of specialty beers from the Magnolia Brewery micro-brewery, which is in the neighborhood, along with other food and drink items from local businesses and non-profits.

Admission to the parking lot celebration was free. All the food items, which were produced and sold by La Cocina and the other local groups for fundraising, were priced under $5. All the profits made from the beer sales went to La Cocina to support its incubator programs for low-income food entrepreneurs.

As the Fresh & Easy and Whole Foods examples demonstrate, the state-of-the-art of grocery store grand openings not only is becoming rather elaborate, it's also becoming much more of a prolonged activity or event.

For example, in Fresh & Easy's case in San Jose and Danville, the store grand openings are nearly a week-long, packed with various activities.

And in Whole Foods Market's case, its grand opening for the Haight-Ashbury store in San Francisco started in the parking lot with various activities a week before the store even opened, continued on opening day, February 16, and in the days following throughout the weekend.

When it comes to grocery store openings in California, this week is no different than last. At least three grocery chains are opening new stores in the Golden State this week, all on Wednesday, March 9. Here's the rundown:

Just one week on the heels of opening its first two fresh food and grocery markets in Northern California, in San Jose and Danville in the San Francisco Bay Area, Tesco's Fresh & Easy opens its third store in the region on Wednesday, March 9, in Pacifica, which is about 10 miles from San Francisco on the coast. [See - December 27, 2010: First Look at the Pacifica, California Fresh & Easy Neighborhood Market Store, One of the First Opening in Northern California in Early 2011.

A big grand opening is planned at the Pacifica store starting Wednesday morning at 10 a.m. And like the Danville and San Jose openings, activities will run from Wednesday -to- Sunday at the new Pacifica Fresh & Easy, which will be United Kingdom-based Tesco's 167th small-format (10,000-12,000 square-foot) Fresh & Easy market

The Pacifica Fresh & Easy store will employ between 20-25 workers. [See - December 27, 2010: First Look at the Pacifica, California Fresh & Easy Neighborhood Market Store, One of the First Opening in Northern California in Early 2011.]

The next new store opening this week belongs to Southern California's fast-growing Superior Grocers chain, which is opening its newest store on Wednesday in the desert community of Palmdale. The new about 40,000 square-foot supermarket, which among other features includes a full-service bakery, fresh meat and seafood counter and large produce department, is at 38360 20th Street East in the city.

Superior Grocers' Emily Kaye says the grand opening will run from March 9 -to- March 13. Among the numerous activities following the ribbon-cutting on Wednesday morning and continuing through March 13 will be free food samples, sweepstakes giveaways, kids' activities and more, according to Kaye. 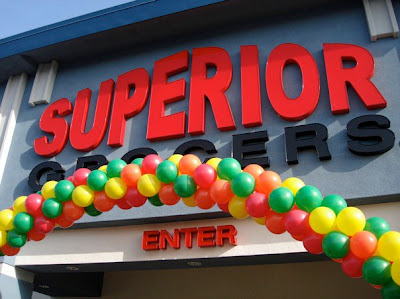 35-store (all in Southern California) Superior Grocers, which is a privately-owned independent chain started in 1981, will also award a $25,000 donation to a local Palmdale school, Cactus Intermediate School, at the grand opening ceremony on Wednesday. The chain makes a similar-sized donation to a local non-profit organization or school each time it opens a new store. Emily Kaye says the City of Palmdale selected the local school as the recipient of the donation.

Superior Grocers, which operates a combination low-price and customer service-focused format, as well as being neighborhood and community oriented, plans to open three more new supermarkets in Southern California this year. Those stores are in the cities of Lancaster, Oxnard and Baldwin Park.

The Palmdale store opening on Wednesday will employ nearly 100 workers.

Back in the San Francisco Bay Area, another privately-held independent chain, Mollie Stone's Markets, is opening a new store in San Francisco's Castro District on Wednesday. The store is the grocer's ninth market and is going into the building of what until November of 2010 was a market operated by another multi-store Bay Area-based independent, Delano's IGA Markets. 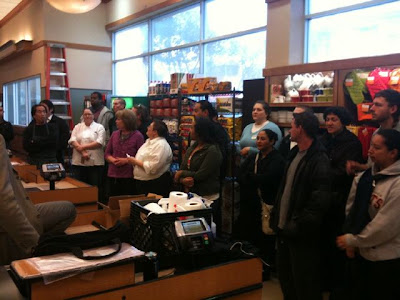 According to Mike Stone, the co-owner of Mollie Stones, the grocer has hired about 25 employees to staff the new Castro District store in the City-by-the-Bay. The new market is Mollie Stone's third in San Francisco and ninth store overall.

This week's new store openings amount to added business and expansion for the three grocery chains noted above, plus additional growth to California's food and grocery retailing industry. The openings also provide an economic shot in the arm to the three cities where the new grocery markets are opening, along with providing new jobs to those people hired by each of the retailers to staff their respective stores.

But if you're reading this and are curious about new things, and have some extra time on your hands and happen to be looking for something to do in Palmdale, San Francisco or Pacifica on Wednesday then you might want to attend one of the store grand openings.

After all, grocery store openings are not only sociologically significant - the supermarket is the crossroads of humanity in America after all - but have many theatrical elements about them, including: the symbolism of the ribbon-cutting ceremony (or in Whole Foods Market's case the baking and breaking of bread), the high-oratory by officials of the grocery chain and local political dignitaries, product displays that often are the merchandising equivalent of theatre, samples of food and drink (just like at a symphony concert's intermission or art gallery exhibition) and more.

Put all these elements together, including the freebies, grocery deep-discounts and sweepstakes giveaways (just like a game show combined with a shopping spree), and you've got theatre in a retail setting. And the cost of attendance, nearly zero, isn't bad in these slowly-improving but still less-than-stellar economic times either.

There's a famous saying on Broadway that's said among financial backers and producers on the opening night of a play. That saying - "Open Big, Close Bigger" - is equally applicable for a grocer when it opens a new store.

A big, jammed-pack store grand opening is great, as it is for the opening night of a new play on Broadway. But in the grocery business, what's even more important is how that new store performs throughout its lifetime. And unlike a Broadway play, a grocer doesn't expect to ever see a new store close, unless it's to replace it with a new one. So in that regard, one might say to the three grocers and any others opening new stores on Wednesday: "Open Big, Thrive and Never Close."