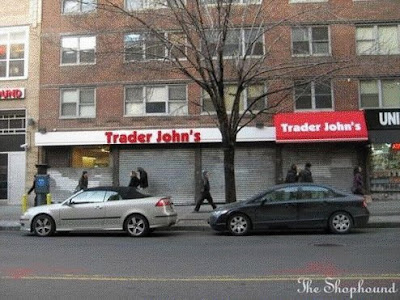 Pictured above is the Trader John's market on 14th Street in New York City that the Gristedes supermarket chain converted to a Trader Joe's knockoff. A judge ruled yesterday that Gristedes must change the store's name. There's a Trader Joe's store just three blocks from the location. [Photo Credit/The Shophound.]

A judge ruled yesterday that New York's Gristedes supermarket chain can't call its newest store (a conversion of a former Gristedes banner market) on 14th street in Manhattan Trader John's. The judge's ruling was in response to a lawsuit filed against the family-owned New York chain by Southern California-based specialty grocery chain Trader Joe's, which argued the Trader John's format and name was a pure ripoff of the original trader and an infringment on its intellectual property. Trader Joe's has a store just three blocks from Gristedes' 14th Street Trader John's.

The judge ruled that Gristedes cannot call the store Trader John's because consumers might confuse it with Trader Joe's, saying the similarities are to close and that it appears to be a copycat right down to the name of the supermarket and TJ's red and white logo. Therefore, he ordered Gristedes to remove its Trader John's sign from the store and change the name.

Gristedes owner, billionaire John Catsimatidis , countered, telling the judge his first name is John, and that he has been in the business of trading as a grocer for many years, and therefore should have the right to name the store after himself and his occupation. The judge didn't buy the argument though.

Those who've seen the converted store agree Gristedes did essentially rip-off the Trader Joe's format, right down to the Trader John's sign on the outside of the store, which uses the same shade of red that Trader Joe's does and looks distinctly like Trader Joe's iconic logo.

Additionally, the format of the 14th Street Gristedes-operated supermarket, formerly Trader John's for a brief period of time until yesterday, is very similar to Trader Joe's in its layout and product selection. All of the other Gristedes-owned supermarkets in New York go by the "Gristedes" banner.

In our analysis its not the similar to Trader Joe's store design and format that did Catsimatidis and Gristedes in though, but rather his choice of the name Trader John's (and its sign) for the store. After all, numerous grocers and other retailers operate stores of similar formats, and steal format ideas from each other. Think Wal-Mart Supercenter, Super K-Mart and Super Target, for example. Or Costco, Wal-Mart's Sam's Club and BJ's Wholesale. Or Office Max and Staples, just to name a few. And it's rather difficult if not impossible to trademark a format. However, creating a new format as Gristedes did (the store differs from its basic Gristedes supermarket format) and then naming it Trader John's is like putting out a flag and asking for a lawsuit, which the New York grocer got.

The judge's decision shouldn't be the end of the world for Gristedes and its new format store. After all, if Catsimatidis believes in the new format, why not give it a new name other than Trader John's or Gristedes. In fact, We think Catsimatidis and Gristedes should hold a contest, asking New Yorkers to "Name Gristedes' new 'Trader Joe's-like format grocery store." We can already see the signs advertising the contest on the downtown and uptown Manhattan buses. Ask David Letterman to do a "Top-Ten List" on his New York based talk show: "The Top Ten Names For Gristedes' New Manhattan Store." Hang a lantern on the problem; on the judge's decision against the long time, family-owned, New-York supermarket chain.

Before current two-term New York City Mayor Michael Bloomberg, a fellow billionaire, engineered a deal with New York City's elected officials, which will allow the mayor to run for a third term (New York law had previously allowed two terms maximum), New York city businessman, grocer and political power player John Catsimatidis had planned to run for mayor in 2009, bankrolling his campaign with a significant chuck of his fortune, just like Mike Bloomberg did in his two winning campaigns for mayor.

Gristedes is an old line New York supermarket chain. Founded in 1888, It's been in business for over 100 years. Catsimatidis bought the chain in the 1980's. It once was the leading upscale grocer in the Big Apple. Those days are long gone though. In recent years the chain has struggled amidst increased competition, particularly in Manhattan. That competition includes the entrance of Trader Joe's and Whole Foods Market into the city, along with increased competitive pressure from New York's many other supermarket chains and independents.

Currently there are about 50 Gristede's stores operating throughout New York City and Weschester County, New York, along with a single store in Locust Valley, Long Island.

Yesterday's decision against the grocery chain's being able to use the Trader John's name on its 14th Street Manhattan market isn't the first time Catsimatidis and Gristedes has been in court of late -- and lost. In September of last year a U.S. federal judge ruled that his company had violated federal and state laws by failing to pay overtime to hundreds of supermarket employees. The judge ruled that Gristedes must pay back pay to these employees. In addition he levied a fine on the grocer.

The Big Apple may be big -- but it's not big enough for two traders, even if one of them could someday soon (after Bloomberg's likely third term) become New York City's next mayor.

[Fresh & Easy Buzz Readers: Use the "comments" link below and offer your suggestions to Gristedes' owner John Catsimatidis about what you think he should change the Trader John's name to now that the judge has ordered the grocery chain to stop using the name on its 14th Street and any future small-format stores.]
Posted by Fresh & Easy Buzz at 2:01 PM

We offer two suggestions for the new name of Trader John's to get things started.

The first is: "Cool Cats Foods," in honor of course of the owner of Gristedes, John Catsimatidis.

The second name suggestion is: "Little Apple Discount." The name is a play on words of New York City's nickname -- the "Big Apple. It also fits with the name of Catsimatidis' corporation, Red Apple Group, along with one of the supermarket banners the company operates, Red Apple Foods.