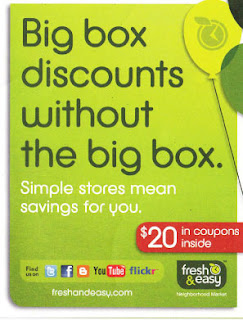 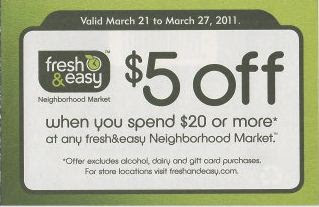 Fresh & Easy Neighborhood Market is flooding the local neighborhoods where its opening its first stores in Northern California with its deep-discount store coupons, specifically the $5-off purchases of $20 or more vouchers, which if used by shoppers to buy the minimum purchase amount offer a healthy 25% savings, resulting in getting $20 worth of groceries for $15.

Tesco's Fresh & Easy is distributing the $5-off purchases of $20 or more store coupons at the Northern California stores in books of four (as pictured at top), with each of the four coupons good for one week. For example, the coupon book currently being distributed at the five Northern California stores the grocer has opened thus far this year contains four $5-off-$20 vouchers good for the following dates: March 14-20; March 21-27; March 28-April 3; and April 4-April 10.

Along with the coupon books, which contain one month's worth (4) of discount vouchers, Tesco's Fresh & Easy is including at least one store coupon - either a $5-off-$20, $6-off-$30 or $10-off-$50 version - in the weekly advertising circular it direct mails to households located around the Northern California stores, something it also does in all of its market regions in California, Nevada and Arizona.

So far this year Fresh & Easy Neighborhood Market has opened five stores in Northern California, in the cities of San Jose, Danville, Pacifica, Concord and Vacaville. On Wednesday the fresh food and grocery chain opens two new stores in the region. Those stores are in Walnut Creek and Modesto. (Click here to read our extensive coverage about Tesco's Fresh & Easy in Northern California - 2011.]

The coupons and profit/loss

We've reported on and written extensively about Fresh & Easy Neighborhood Market's use of the deep-discount store coupons, which offer shoppers 25% and 20%-off total store purchases if used to buy the minimum required purchase amount, since 2008. The discount coupons, which can be used on everything sold in the stores, are Fresh & Easy's primary promotional vehicle, along with its weekly advertising circular. Tesco's Fresh & Easy stores don't except manufacturer's cents-off coupons, like nearly all of its competitors do.

Tesco has said it expects to report a full-fiscal-year loss of $250-$259 million for its El Segundo, California based chain, which is the same amount (loss) it reported for Fresh & Easy for the previous 2009/10 fiscal year, despite the fact sales at Fresh & Easy Neighborhood Market grew by 47% in the first half of fiscal-year 2010/11, compared to the same period in the previous year, largely as the result of new store openings. Tesco's 2010/11 fiscal year ended in February. It will report its interim 2010/11 fiscal year financials in April 2011.

Our analysis: Thus far, based on the sales-to-profit/loss ration described above, Tesco's strategy in which it says as sales grow at Fresh & Easy losses will decrease has failed to occur.

Tesco also reported a 10% increase in same-store-sales for the half-year, and in December 2010 reported nearly the same figure for Fresh & Easy for its third quarter. For the 13-week period ended November 27, 2010, overall sales at Fresh & Easy Neighborhood Market grew by 38.5% (35% at constant rates), over the same period in the previous year, and same-store-sales, an even more important indicator for retailers, grew 9.8%.

Same-store-sales is a key metric for food and grocery retailers because it measures sales growth for stores opened at least one year, thereby factoring out sales due primarily to rapid new store expansion.

Tesco operated 155 Fresh & Easy markets in California, Nevada and Arizona at the end of its fiscal 2010/11 third quarter. Currently there are 169 Fresh & Easy stores.

These sales growth figures, particularly the same-store-sales increases over the previous like periods, should impact the amount of loss Fresh & Easy Neighborhood Market has for the 2010/11 fiscal year.

But Tesco, based on its estimate that the loss this year will be about the same as the previous year, despite the significant overall and same-store-sales growth, is essentially saying - without outright saying it - that it's strategy of achieving rapid sales growth primarily by opening numerous new stores isn't reducing losses at Fresh & Easy, in our analysis.

If the sales growth strategy was working, for example, we should have seen some reduction in the loss amount in fiscal year 2009/10 compared to 2008/09, which wasn't the case, along with seeing the same phenomenon when Tesco reported the mid-year 2010/11 loss of $151 million for Fresh & Easy, which actually was a higher mid-year loss than for the previous mid-year period, despite the significant sales growth in period-over-period sales. (See the October 10, 2010 story linked above for additional details.)

The coupons and margins

In its mid-year report in October 2010, Tesco also said its trading profit margin for Fresh & Easy Neighborhood Market was a negative-38%. To put this number in perspective, even the worst-performing and less-profitable grocery chains in the U.S. have a margin at least in the plus-high teens -to- plus-low twenties. Whole Foods Market, for example, has a plus-36% gross margin.

It's this particular metric - margin - where the regular and even chronic use of the deep-discount store coupons comes into play for Tesco's Fresh & Easy and it's goal to break-even by the end of its 2012/13 fiscal year, which is two years from now.

For example, unlike manufacturer's cents-off coupons, which retailers like Kroger, Walmart, Safeway, Target and others are reimbursed by manufacturers for accepting, the discounts from the Fresh & Easy coupons come directly out of the grocer's profit margin, meaning each time a shopper uses one of the coupons and the 15%, 20% or so is discounted from her purchases, that percentage comes out of Tesco's hide from a profit margin standpoint.

The regular use of the coupons - Fresh & Easy has had the deep-discount vouchers in regular circulation since 2008 on a near weekly basis - is, in our analysis, a significant contributor, along with a number of other factors, to Fresh & Easy's negative-38% margin, as we've discussed previously in Fresh & Easy Buzz.

The coupons and Northern California

Tesco had a solid opportunity when it launched into Northern California - a brand new market region for its Fresh & Easy chain - this month to hold back from distributing the store coupons and see if the stores could make it on their own without the chronic use of the deep-discount vouchers.

However, as evidenced by the coupon books and distribution of the coupons in the weekly advertising circulars, Fresh & Easy obviously had decided not to do so. Im fact it's doing the opposite - it's flooding the neighborhoods where the stores are with the coupon books containg four weeks' worth of the deep-discount vouchers.

That's good news for grocery shoppers, as the coupons go a long ways towards bringing down a grocery bill, particular if a customer buys close to the minimum amount required to use the coupon, such as $20 for the $5 vouchers. Fresh & Easy's average market basket size is about $20-$25, according to our research and reporting, which among other things suggests that on average shoppers using the coupons aren't buying much over the minimum purchase amount required to redeem the store vouchers.

Additionally, in the past Fresh & Easy has tried to get away from using the $5-off purchases of $20 or more coupons and instead focus on the $6-off-$30 and $10-off-$50 versions. However, it's found that, particularly in the case of the $10-off-$50 coupons, which it does use at times as online coupons, the use of the version by shoppers is much lower than the $5-off and $6 off versions.

The shoppers we've talked to in Northern California are pleased as punch to get the coupons and coupon books from Fresh & Easy, as is the case with shoppers in California, Nevada and Arizona, many of whom told the grocer when it tried to stop offering the discount vouchers for a few months in 2009 (margin reasons perhaps?) that without the coupons they were either not shopping at the stores at all or doing so much less frequently. Tesco's Fresh & Easy listened and resumed its regular distribution of the coupons, which its done every since, having at least one version of the discount vouchers out in circulation nearly every week since then.

At present, we don't see Fresh & Easy Neighborhood Market coming in with a margin higher than the negative-38% Tesco reported for the California-based chain in October 2010, when it reports its fiscal year financials later this year. If the margin is improved, we except it to be so by no more than a couple percentage points. If Tesco doesn't report Fresh & Easy's margin number for fiscal 2010/11, we expect it's because it's worse than the first-half negative-38%.

The coupons and breaking even

Meanwhile, the coupon books and coupons in the weekly advertising circulars, along with the online vouchers the grocer distributes every two or three weeks, are helping sales at the just-opened Fresh & Easy stores in Northern California, which on Wednesday will number seven units, with five more stores to come between now and the end of April - and more units after that.

Perhaps Tesco has a secret plan to wean shoppers off Fresh & Easy' shopper-delectable deep-discount coupons? Or perhaps it has a companion plan that will bring Fresh & Easy's margin up from that negative-38% number to something in at least the plus-teens by say mid-2012, which is something that if achieved would warrant not only a tip of the hat but also a pat on the back at the same time?

But right now, in our observation and analysis, we don't see anything Tesco's Fresh & Easy Neighborhood Market is doing from operations and mechandising standpoints - combined with the price pressures from its competitors in the highly-competitive markets in California, metropolitan Las Vegas, Nevada and metro Phoenix, Arizona where it has its 169 stores - that indicates there will be a significant upward movement in that negative-38% margin metric in 2011.