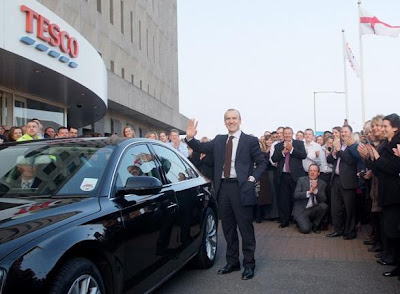 Terry Leahy (above) waves bye to employees at Tesco's corporate headquarters in Cheshunt, Hertfordshire, United Kingdom, as he leaves the office early and for the last time on March 3, 2011, after serving as CEO for 14-years. His parting words: "See you in the shops."

We said in our recent coverage about the retirement of Tesco CEO Terry Leahy, who stepped down less than three weeks ago after 14-years as the chief of the United Kingdom-based global retailer, the energetic 55-year-old wouldn't let the British sod get under his shoes for very long, and that he would be launching a new career as a private investor, including as an angel investor. Angel investors provide early funding to start up companies.

Well...Leahy, who's been doing his homework on potential companies to invest in since he announced in June 2010 he would retire from Tesco in March 2011, has already made his first angel-oriented investment. That investment is in a United Kingdom-based start-up online learning company Stuckonhomework.com, which describes itself as: "A revolutionary video based website designed to provide help for GCSE pupils when they get stuck on their homework." Think of it as and online tutor of sorts.

For those not familiar with its education system, students in England and other parts of the United Kingdom study General Certificate of Secondary Education (GCSE) over two years, from the age of 15, and take GCSE exams at the end of this period. These are the final years of their compulsory high school education. At this point, students can either leave school and get a job, or go on to further studies.

In contrast, in the United States students begin high school in the ninth grade (average age of 14-years-old) and are required to spend four years attending in order to graduate with a high school diploma, although in most states after age 16 a student can take a G.E.D. (General Equivalency) test, and if they pass it are awarded a G.E.D. high school diploma.

Start-up Stuckonhomework.com launches tomorrow, according to its founders, United Kingdom media veterans Helen Royle and Teresa Watts who, among other positions and places, have worked as executives at Britain's ITV and at the BBC.

According to Royle and Watts, the online tutor will operate on a paid subscription model. It's designed to assist GCSE students in England, Wales and Northern Ireland (to start) with their GCSE school curriculum in multiple subject areas, beginning with mathematics.

Neither Royle, Watts nor Terry Leahy have yet announced how much the former Tesco CEO has invested in stuckonhomework.com or how much of an ownership stake his investment represents. That information might have to wait to be known if and when the online learning company goes public.

Having Sir Terry, who serves as an unpaid counselor to British Prime Minister David Cameron and is one the most well-known businessmen in the United Kingdom, backing the start-up is a major plus for the two entrepreneurs. After all, the energetic Leahy is very well connected.

The investment in the educational online start up company also fits with Terry Leahy's focus on education during his tenure as Tesco's CEO. Tesco runs extensive education programs, including in the basics, for its employees, along with offering funding for employees who qualify and want to extend their education at the university level.

As the head of one of the top five companies in the United Kingdom, Leahy also spoke out frequently about the country's national education system, particularly arguing for higher standards in its schools. The majority of employees retailers hire

We recently were told by a good source that in addition to making investments in companies at home in the United Kingdom and in Asia, Leahy, who was replaced as CEO by another Tesco veteran, Philpe Clarke, has been looking at potential investment schemes, including start up companies in the environmental, health, retail, education and other sectors, in the United States, home to Tesco's Fresh & Easy Neighborhood Market, which was Leahy's idea and was launched essentially as a start up in Southern California in 2006. The first Fresh & Easy stores opened in November 2007. There are currently 169 Fresh & Easy markets in California, Nevada and Arizona.

We just happen to know of a couple food and grocery retailing-oriented start ups in the U.S. that might possibly interest Sir Terry, although we have a hunch he's had his fill of those at least for a while. But just in case - our e-mail address is on the blog.

February 28, 2011: Changing of the Guard: Clarke Takes Over the Reins as Tesco CEO Wednesday

February 28, 2011: Big Day For Tesco CEO Terry Leahy: Retirement and A Birthday But No Break-Even For Fresh & Easy USA On His Watch