San Francisco, Antioch and Fairfield Stores Next Up in Northern California For Fresh & Easy Neighborhood Market 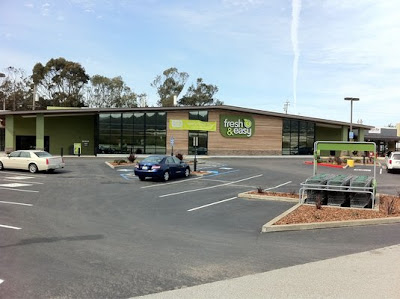 The Fresh & Easy store in the Pedro Point shopping center in Pacifica, California (pictured above), which opened on March 9, continued it's grand opening activities over the weekend. On Saturday the store featured a guitar player and a balloon artist, who made various creations out of balloons.

The store at 5550 Coast Highway in Pacifica also had a bit of excitement on Friday when it, along with other merchants along the coast in Pacifica, had to close for part of the day because of the tsunami warning triggered by the earthquake in Japan. The Fresh & Easy store was able to open later in the day after local authorities sounded the all clear.

Meanwhile, the less-than-week-old Pacifica Fresh & Easy is thus far receiving mixed reviews on the popular review site yelp.com. Some love it; others hate it. A few are not sure. Read the reviews here.

A number of the yelp reviewers express a dislike for aspects of Fresh & Easy that we've identified and pointed out since 2008 are problems for the chain, in our analysis. Those aspects include: its self-service-only checkout, non-acceptance of manufacturers cents off coupons, offering only free plastic grocery bags but not paper, mostly pre-packaged produce; and a couple others.

Fresh & Easy Neighborhood Market is preparing to open three additional stores, besides the three units it's already opened so far this year in San Jose, Danville and Pacifica and the eight stores it's set to open this month and in April, Fresh & Easy Buzz has learned.

The three stores at the top of the next store opening round for Fresh & Easy in Northern California are:

Depending on the resolution of certain circumstances (see the story linked above) Fresh & Easy Neighborhood Market, which is owned by United Kingdom-based Tesco, would like to open the 32nd & Clement and 5800 Third Street stores in San Francisco at around the same time.

The Antioch location at Lone Tree & Golf Course is a site Tesco's Fresh & Easy has had since at least January 2008. It's a build-from-the-ground up store location in a shopping center where CVS Pharmacy is also building a new drug store next to the Fresh & Easy market. The new CVS is also set to open soon.

Farfield, where Tesco's Fresh & Easy will soon open its store at Beck Avenue & West Texas, a location it also acquired in early 2008, is in Solano County. It's about 30 minutes by car from Vacaville, where Fresh & Easy Neighborhood Market is opening a store at Elmira Road & Nut Tree Road, also on Wednesday.

When the Concord and Vacaville Fresh & Easy stores open on Wednesday, they will make five stores thus far in Northern California for the Tesco-owned fresh food and grocery chain, which is based in the Southern California city of El Segundo and currently has 167 stores in California, Nevada and Arizona.

Six additional Fresh & Easy stores are slated to open from March 23 -to- April 27. Those stores, their locations and opening dates are:

Based on our current information from sources, and as we always say, new store opening dates are a fluid and dynamic thing at Tesco's Fresh & Easy, the 32nd & Clement unit in San Francisco could be opened as early as April, although May is the more likely opening month at this point in time.

The Antioch and Fairfield Fresh & Easy stores currently are slated for May or June openings, depending on a few variables.

Based on our reporting to date, Fresh & Easy Neighborhood Market currently has at least 60 store locations planned in Northern California, and continues to acquire new sites for future stores.

Tesco's Fresh & Easy has yet to announce the dates of any additional store openings in Northern California beyond the first 11 it's opening in March and April 2011.

However, in addition to the stores we are reporting on in this piece, Fresh & Easy plans to open additional units in Northern California this year. Stay tuned.

Also, for a specific look at each of the three Fresh & Easy stores that have opened in Northern California so far in 2011, read the stories linked below:

Some of the negative yelp reviews sound really bogus or completely biased (ufcw). Good luck to all the new stores opening in norcal!

Hi. So what happen with the plans to open a store in the Mission? at South Van Ness Av, in San Francisco? is so sad you are not in the plans! We really need something in there, is such a waste. Please let us now. Sincerely Leticia Schmill

As it says on our blog, we're an independent publication and not affiliated wih Tesco's Fresh & Easy or any other retailers, in case you aren't aware of that fact

But if you drop us an e-mail at fresheasybuzz@yahooo.com regarding your question, we can provide you with some information on it.

Also, readers might have some comments on your question. Feel free to check back.

Yeah for opening the Fairfield! Store. I live in nearby Suisun, and have been driving to the Vacaville store since it opened!
I will be a several-a-time-a-week visitor to the FF store, right next to the 99 store!