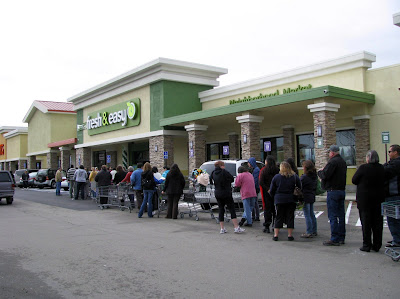 A long line of shoppers waited this morning for the opening of the Fresh & Easy store in Modesto, California, as you can see in the photograph above, and in the next two photos below.

A big crowd of shoppers braved the wind and rain this morning to attend the grand opening of Tesco's first small-format Fresh & Easy Neighborhood Market store in Modesto, California.

The Modesto Fresh & Easy store, which opened this morning at 10 a.m. and is the first of four units Tesco thus far has planned in Modesto and nearby Ceres, is located in a shopping center at 1717 Oakdale Road (at Lancey Drive). The store is about a half mile from a Save Mart supermarket and an equal distance from a Raley's Superstore.

Prior to Tesco's Fresh & Easy acquiring the location in 2008 [See - November 6, 2008: Upcoming New Markets News: Tesco Will Open A Second Fresh & Easy Store in Modesto, California], the store was previously a supermarket operated by Modesto-based Save Mart Supermarkets. Save Mart closed the store a few years ago when it built and opened a larger and more modern supermarket half-a-mile away. Fresh & Easy renovated the building into the about 12,000 square-foot market it opened to a solid crown of shoppers this morning.

The opening of the Fresh & Easy store at Oakdale Road and Lancey Drive in Modesto was kicked off shortly before 10 a.m, when Modesto Mayor Jim Ridenour and the store's manager (both pictured here) cut the ceremonial ribbon, which was good news to the crowd waiting outside in the wet weather because they were allowed to enter the store shortly thereafter. 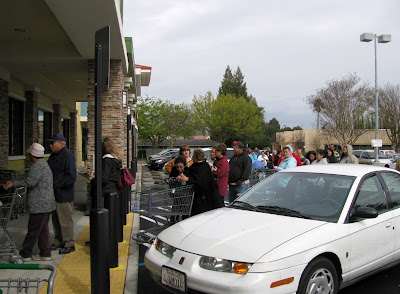 The store had a steady stream of shoppers following the 10 a.m opening. A Fresh & Easy Buzz correspondent who attended the opening said a second wave of shoppers showed up between 10:30 a.m. and 11 a,m., keeping the store's aisles fairly packed until noon, when a fresh batch of shoppers, many who work at the nearby businesses, showed up to take a look at Modesto's newest grocery store.

United Kingdom-based Tesco, which is the third largest retailer in the world, is the second major global chain to open a grocery store, Fresh & Easy, in Modesto in the last couple years.

In 2008 Walmart Stores, Inc., the world's largest retailer, opened its first Supercenter in Modesto. That supercenter, which has about 80,000-90,000 square-feet of selling space, also happens to be Walmart's first - and to date only we're aware of - hybrid supercenter located in what was an existing vacant big box building.

The supercenter, which is located on McHenry Drive in Modesto, previously contained a warehouse format supermarket and a drug store. Walmart converted the building into a "hybrid supercenter" in an existing building, something the Bentonville, Arkansas-based global-retailer is now doing elsewhere in California and in other regions in the U.S. The average new construction supercenter is about 170,000 square-feet, although Walmart is currently building some as small as 125,000-145,000 square-feet.

Walmart also has a discount format store in Modesto. The store isn't currently on Walmart's list of those in California it plans to expand and add food and grocery sections to, however.

Despite Walmart's opening of the hybrid supercenter in 2008 and now Tesco's entry into Modesto with its first Fresh & Easy store, the city's dominant food and grocery retailers remain locally-based.

The top grocer in the city of 205,000 is Modesto-based Save Mart Supermarkets, which has seven stores in Modesto - five Save Mart banner supermarkets, one Food Maxx discount warehouse store and a Maxx Value Foods discount supermarket.

Maxx Value Foods, a take off on its bigger cousin Food Maxx, is Save Mart's newest format. The Modesto headquartered grocery chain, which has 241 stores throughout Northern California, northern Nevada and as far south in the Central Valley as Bakersfield and about $5 billion in annual sales, converted a former Save Mart supermarket on Paradise Road in west Modesto into the Maxx Value Foods discount supermarket, which currently is the only one in operation. The format is a test for Save Mart and if it succeeds the retailer could convert some of its older, existing Save Mart stores located in lower income neighborhoods, which Paradise Road in Modesto is, into Maxx Value stores.

West Sacramento-based Raley's is Save Mart's leading competitor in Modesto. It has four stores, all under the Raley's banner. [ See - March 19, 2011: Preview: Fresh & Easy Neighborhood Market is Headed to Save Mart Supermarket's Hometown of Modesto.] 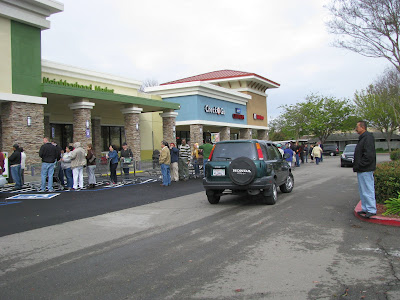 The big turnout at this morning's Fresh & Easy store opening was likely due to a number of factors, including the fact the grocer mailed its weekly ad flyer, which included a coupon good for $10-off purchases of $20 or more and another offering a free reusable canvas shopping bag for purchases of $10 or more, to homes throughout the immediate area, along with to those located in neighborhoods at least as far as two and a half-to three miles from the 1717 Oakdale Road store.

Additionally, Modesto has a very high unemployment rate. the city and Stanislaus County, which it's the county seat of, currently suffers from a joblessness rate of nearly 19%, compared to California's overall 12.4 unemployment rate.

The city and county also have among the highest housing foreclosure rates in the country. Stanislaus County has rated among the top five U.S. counties for residential foreclosures since 2008. The median value of a home in Modesto has dropped by about 40% since 2005.

As a result of these continuing economic struggles, a grocery store grand opening is the perfect venue for the unemployed - a decent outing without a ticket price - and for those looking for a good deal on groceries. A number of shoppers told our correspondent just that this morning.

Lastly, over the last few years grocery store openings have simply become rather popular outings, particularly for the people who live in the neighborhoods where the new stores open. After all, from sociological and anthropological perspectives, grocery stores are far more than merely places to buy food. Their "third places" in which much of the needs of societies and neighborhoods, along with individuals, are met. 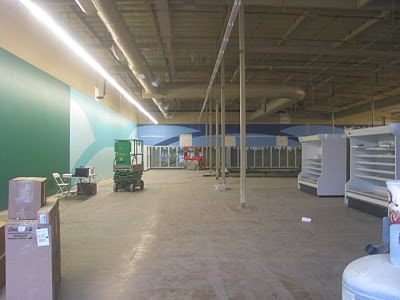 Before and after: Pictured above is the inside of the Fresh & Easy store at 1717 Oakdale Road in Modesto on January 31, 2001. Below is the store this morning at the grand opening. 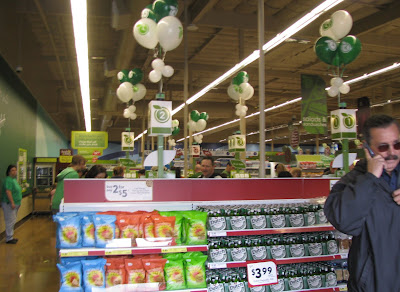 In addition to opening the store in Modesto today, Tesco also opened a Fresh & Easy market in Walnut Creek, which is in the eastern part of the San Francico Bay Area. Walnut Creek is next door to Concord, where the grocer opened a store last Wednesday. Walnut Creek is about 65 miles from Modesto.