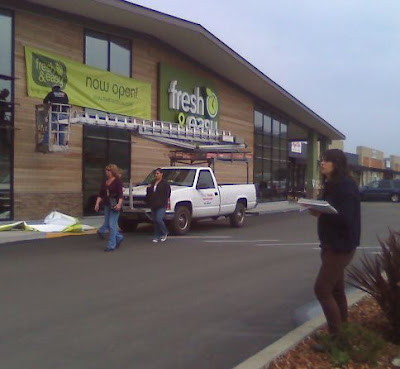 The Fresh & Easy store (pictured at top), which opened to a big crowd of customers at 10 a.m this morning, is located in the Pedro Point Shopping Center, at 5550 Coast Highway in Pacifica, which is just a short drive from San Francisco.

Like at all Fresh & Easy store grand openings, today's event at the Pacifica market was kicked off with a ribbon-cutting, followed by a few words by representatives of the Tesco-owned grocery chain and local dignitaries. 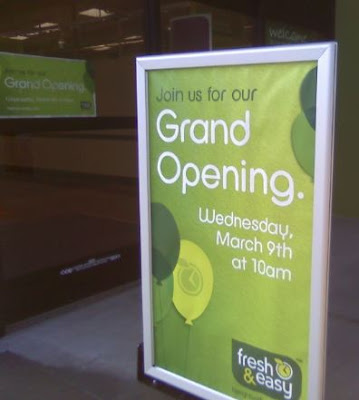 Following the ceremonial activities, the doors were opened at 10 a.m. to what was a huge crowd of people waiting to get their first look at the store in Pacifica's Pedro Point neighborhood. Store employees gave the people waiting in line cups of Minestrone soup (a good idea in Pacifica, which is famous for its cold and damp morning fog) and bottled water.

In addition to the crown of shoppers and just plain curious, the United Food & Commercial Workers (UFCW) union, which has been attempting to organize store-level employees of Fresh & Easy Neighborhood Market for over three years, had numerous representatives attending today's grand opening of the Pacifica store. 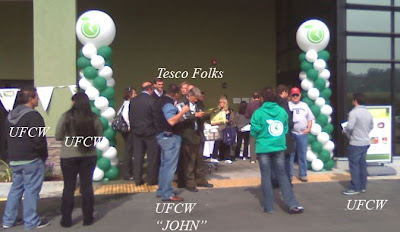 In fact, as you can see in the photograph above taken this morning by a Fresh & Easy Buzz correspondent who attended the grand opening, the UFCW union organizers and Representatives of Tesco's Fresh & Easy - see the players as labeled in the photo - appeared to coexist rather well, despite having very different agendas today.

The UFCW organizers attempted to persuade people attending the opening not to go inside the store because Tesco's Fresh & Easy is non-union. The union representatives also distributed leaflets describing the UFCW's campaign to unionize Fresh & Easy store workers, as they do regularly at the stores. According to our correspondent, very few shoppers attending the grand opening this morning were motivated not to enter the store after interacting with the union organizers.

The UFCW Representatives were also video taping at the grand opening, along with counting the number of shoppers attending the event, as well as counting the number of people who decided not to go inside the store after the union folks interacted with them. [Note: The woman holding the writing pad in her hands (far right) in the photograph at the very top is the UFCW union's "counter."]

Tesco's Fresh & Easy distributed copies of its weekly advertising circular and coupons (a couple for $5-off purchases of $20 or more and one offering a free reusable canvas shopping bag with any $10 purchase) to residents of the Pedro Point neighborhood prior to the stores opening this morning. The ads and coupons seemed to drive many of the shoppers to the store, evidenced by the fact many of those waiting in line were holding the ad flyers and coupons.

A resident of the neighborhood, who is a member of the Pedro Point Community Association, said the store was a "madhouse" when she was there at 10 a.m., saying she left after a while and went home, coming back later in the day to do her shopping.

"Folks were pleased with the prices and some of the selection. I know my friends were disappointed that the emphasis is on the 'easy' and not on the 'fresh'. I think a number of people thought it would be more organic than it is, she said today.

"For those of us who live on the west side of Highway 1 it will be nice to not have to cross the highway for a quart of milk. Some folks seem to think that the store coming in will significantly change their lives. It will change our neighborhood - for better and worse - but it is hard for me to relate to those who think that this is the second coming."

She asked that we not use her name because "Pacifica is a small town and the Pedro Point neighborhood is even smaller." We agreed in order to protect her privacy.

As it does each time it opens a new store, Fresh & Easy Neighborhood Market donates $1,000 to a local non-profit group. The local beneficiary of the $1,000 donation from the grocer is the Pacifica Historical Society. And it's an easy bet Tesco hopes its Fresh & Easy store will become a part of the city's history.

Another local resident, W. Sims, who attended the grand opening this morning said when asked for an overall impression of the store: "I thought the prices were good. I had researched the specials before I went so I already knew I was going after the New York steak for $4.99pound. We got four steaks for $12.80, Great price. We did purchase two frozen P.F. Changs Meals for $7.99. I will add some rice and have a reasonably priced meal."

Regarding the grand opening today, Sims added this: "I wandered up and down almost all the aisles but more and more people were coming in so we took our stuff and headed for the check out. We will have the fresh&easy tiramisu for dessert tonight. I definitely will go back in a few days when the crowd subsides. I did talk to the women in front and back of me in the line. Both were glad the store was open, and offering unique and reasonable priced groceries.

Fresh & Easy Neighborhood Market's road from acquiring store location, which it owns, in the Pedro Point chopping center to opening the store today has been a long and interesting one.

It also happens to be a road Fresh & Easy Buzz has covered and written about extensively. (Perhaps the Pacifica Historical Society, flush with it's $1,000 donation from the grocer, will include our coverage in its archives if Tesco's Fresh & Easy remains in Pacifica long enough to achieve historical significance?)

Therefore, in case you're a history buff - or just like to be able to follow a grocery retailing story from inception to the opening of a store - below are those stories from Fresh & Easy Buzz, starting from the beginning.

July 18, 2010: When it Comes to Northern California - its Competitors are Rome Burning and Tesco's Fresh & Easy Neighborhood Market is Nero Playing the Fiddle

October 9, 2008: Pacifica, CA Mayor Jim Vreeland Says He's Excited to Have Fresh & Easy Store Coming to Pedro Point; Says New Center Will Be One of the Best in Town

May 15, 2008: Fresh But Never Easy: Tesco's Long But Rapid South-North March in the Nation-State of California.
Posted by Fresh & Easy Buzz at 8:56 PM

Fresh & Easy needs to bag the plastic bags at its Pacifica store. I've already seen plastic grocery bags littered around the neighborhood. It's a big issue here because the store is right near the coast and beach. The bags blow out into the ocean. I try to always bring reusable bags but why no paper bags?